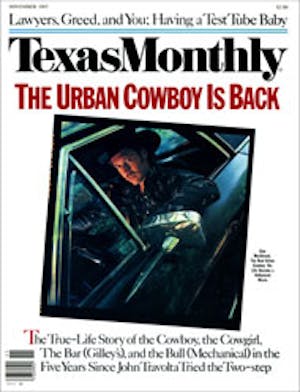 IT WASN’T BECAUSE I was touring West Texas that I ate a cheeseburger for breakfast. It was after stumbling upon Johnny B’s for lunch the day before. Never mind the open sky and distant mesas, the cheeseburger at this inviting luncheonette was all I could envision.

Open only since November (and with the jukebox still on order at my last visit), Johnny B’s is a sleek little soda fountain/burger joint with an old-timey feel on the main strip in Marathon, just down the street from the Gage Hotel. The simple menu features burgers, breakfast sandwiches, hot dogs, ice cream, and other fountain favorites (like phosphates and banana splits), served unpretentiously at the counter at one of the comfy booths along the wall. A mirror behind the entire length of the bar reflects the chrome fixtures and the restaurant’s one decorative prop: a working traffic light. But as shiny as parts of this place are, Johnny B’s retains a realistic, dusty West Texas feel. Pressed tin adorns the front of the counter, and the black-and-white-checked floor is subdued by walls painted an easy pale green. A ranch hand would feel right at home sipping a soda here.

My pals and I kicked back in one of those booths for lunch, and were treated to some of the best burgers we’ve had. They were classics: thinnish patties on wide grilled buns topped with mustard, pickles, tomatoes, onions, and shredded lettuce, half-wrapped in wax paper and delivered in a red plastic basket. Real Lime Rickeys and cherry cokes (the kind that don’t need a trademark sign after their name) washed them down rightly, and when we noticed Johnny B’s served breakfast, we vowed to return the next morning.

Owned and operated by J.P. Bryan, son of the owner of the Gage, the long narrow building where Johnny B’s is housed was a drug store in the 1930s, located across the railroad tracks on the other side of the street. Since it was moved to the north side of the street, the building has been a pool hall, a bar, a propane company and most recently, the Purple Sage quilt shop, according to manager Marilyn Shackelford. Fast becoming a master soda jerk, Marilyn showed us how to make a fresh Lime Rickey at home.

In less than 24 hours we were back again, my friends ready to try Johnny B’s egg sandwiches and delicious homemade cake donuts—both worthy selections. But despite a funny look from the waiter, I couldn’t help but order a cheeseburger with my morning coffee and orange juice.