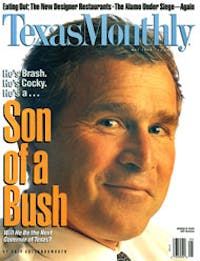 I told you so. I predicted the demise of the Southwest Conference in this magazine, and sure enough, four schools—Baylor, Texas, Texas A&M, and Texas Tech—are leaving the SWC to join the Big Eight. I admit that the breakup took a little longer than I had expected: Richard Nixon was president when that article was written. And my timing was off in other ways. “Baylor’s last championship was closer in time to Custer’s Last Stand than to us in 1974,” I wrote. Guess who won the conference title that very season? Oh, well, it was the right article, just the wrong year.

In its heyday, however, the Southwest Conference was one of the institutions that defined Texas. The heated rivalries it created both divided us and bound us together. When SMU and TCU played for the 1935 national championship, America’s leading sportswriter, Grantland Rice, wrote of SMU’s 20-14 victory, “This tense, keyed-up crowd saw a sixty-minute swirl of action that no other section of the country could even approach in the clash of two sectional teams.” But the conference couldn’t survive competition from pro football, recruiting raids by out-of-state universities, and cheating scandals in the eighties. Here is a nostalgic look at the great moments of the past, preserved at the Texas Sports Hall of Fame museum in Waco, and the events involving each of the eight conference schools that epitomize the rise and fall of the Southwest Conference.

Rise Cheer, Cheer, 1934 October 6 is the day that the Southwest Conference gains credibility for the first time. Texas bears Notre Dame in South Bend, Indiana, 7-6, handing the Irish their first loss ever in a season opener at home. At nearby Purdue, Rice upsets the Boilermakers, who have lost only four games in the previous four years. Never before has the Southwest Conference enjoyed such national prestige.

Fall Lost Weekend, 1992 September 5 is the day that the Southwest Conference loses its last shred of credibility. On the opening weekend of the first season after Arkansas leaves the league, all SWC teams except the Aggies go down to defeat. Oklahoma is the only respectable opponent; the other losses are inflicted by teams that used to be patsies for the SWC: Louisiana Tech, Tulsa, Air Force, Tulane, Mississippi State, and New Mexico.

Rise The Mighty Doaks, 1948 Fan interest in the Mustangs is so high that SMU moves its home games from Ownby Stadium on campus to the Cotton Bowl. Doak Walker leads the team to a 9-1-1 record and wins the Heisman trophy.

Fall Homeward Bound, 1989 Fan interest in the Mustangs is so low that SMU moves back to Ownby Stadium. In their first season after the NCAA death penalty, the Mustangs lose all eight conference games, giving up 401 points.

Rise Maegle-omania, 1954 Rice defeats Alabama in the Cotton Bowl, 28-6. Dicky Maegle sets a record by rushing for 265 yards on 11 carries. He is headed for a 95-yard touchdown run when Tommy Lewis of Alabama jumps off the bench and tackles him. Between 1946 and 1957, Rice wins the Southwest Conference four times. It hasn’t won since.

Fall MOB Scene, 1973 Texas A&M fans, angry at a satiric halftime performance by the Marching Owl Band (known as the MOB), surround the musicians after the game and prevent them from leaving the stadium. Although Rice upsets A&M, 24-20, the band gets more coverage than the football team. Things will only get worse: Rice will win only seven conference games in the next six seasons.

Rise Nifty Fifties, 1959 TCU knocks off undefeated Texas, l4-9. The Horned Frogs win their second straight Southwest Conference championship and are the team of the decade for the fifties, with four titles. TCU will upset number-one-ranked Texas again in 1961, but they never win another conference championship.

Fall Last Chance, 1976 Tech’s best team goes 10-1 and ties for the conference championship. But its only loss is to Houston, and the Cougars get the Cotton Bowl invitation. The Red Raiders will never be a contender for the championship again. In 34 seasons as a member of the Southwest Conference, Tech has only one co-championship and no Cotton Bowl appearances.

Rise Royal Reception, 1969 Texas, number one in the polls, and Arkansas, ranked second, play on the last day of the season for the conference title. Texas wins, 15-14, helped by a daring fourth-quarter pass, and secures the national championship by defeating Notre Dame in the Cotton Bowl. Darrell Royal is the coach of the year. Texas is on a run of six consecutive conference titles, seven in eight years.

Fall Royal Pain, 1976 Texas and Arkansas play the last game of the season again-this time to determine which team can avoid ending the season with a losing record. Darrell Royal announces his retirement before the game. Though he stays on as athletic director, he is not allowed to hire the next coach. Regents chairman (and former governor) Allan Shivers intervenes infavor of Fred Akers. The athletic department is split by politics, and the football program slowly deteriorates. Akers goes undefeated in his first season, but since 1977, Texas has won the conference championship only twice.

Rise God’s Squad, 1974 Baylor 34,Texas 24! The Bears win the conference championship for the first time in fifty years. The scoreboard stays lit all night as people drive by the stadium to see it. The wife of Baylor’s president credits God for Baylor’s victory, saying, “He’s finally taking an interest in football.” Baylor coach Grant Teaff says, “I think we have proved that the private schools can compete in the Southwest Conference.” But Baylor will win only one more title in the next nineteen years.

Fall The Way to San Jose, 1980 Baylor’s best team ever goes 10-1 but fails to win credibility for the Southwest Conference by losing to San Jose State in the regular season and getting blown our by Alabama in the Cotton Bowl. The failure of Southwest Conference teams to do well against teams from other conferences will soon become a fatal trend.

Rise High Cotton, 1979 Houston reigns as the dominant team in the conference and defeats Nebraska in the Cotton Bowl. In the four years since joining the SWC in 1976, Houston has won 36 games,3 championships, and 2 Cotton Bowls. Attendance averages 37,500 a game.

Fall Low Blow, 1989 Houston 95,SMU 21. Never has a victory hurt a program more. Houston runs up the score on an inexperienced SMU team that is in its first year of play after the NCAA death penalty. Though Houston wins 28 games and loses only 5 from 1988 through 1990, it goes on probation for paying players, and the rout of SMU further establishes its reputation as an outlaw program. Fans don’t come (home attendance in 1988 was just 22,000 a game) and neither do recruits. In the next three years, Houston wins only six conference games.

Rise Sunny and Sherrill, 1982 The future looks bright when Texas A&M hires new coach Jackie Sherrill at a salary of $287,000 a year. Aggie haters snicker as Sherrill struggles through three mediocre seasons, but from 1985 through 1988, the Aggies go 26-4 in conference games, win three championships, and defeat Texas all four years. Sherrill resigns when the Aggies go on probation, but he leaves the program in such good shape that A&M has finished first or second every year since.

Fall Poll Axed, 1992 The Aggies go 12-0 in the regular season, but the conference has so little respect that they get no consideration in the polls as the number one team in the country. On New Year’s Day the Aggies’ undefeated season ends with a 28-3 drubbing by Notre Dame, further eroding the SWC’s stature.