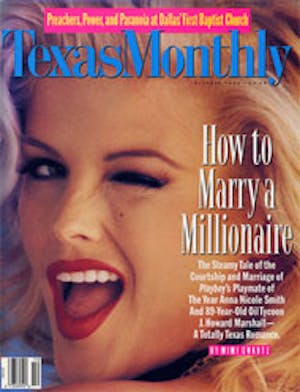 Edward Blum ran for Congress in 1992, lost, and then decided to change America. He has succeeded. He was one of six plaintiffs in a Texas case that, along with similar cases in North Carolina and Louisiana, will help reverse the racial separation and antagonism that infects our public life. Blum, who works as a stockbroker, is a likable man, serious without being gloomy, a supporter of conservative intellectual journals, and inclined toward obsessive dedication. He has no patience with the privileged branch of the Republican party, whom he calls “bent grass roots Republicans” after the preferred grass for golf greens.

From the beginning of his run for Congress, Blum knew that his campaign was quixotic at best. He was the white conservative Republican challenger to Craig Washington, the black liberal Democratic incumbent in Houston’s 18th Congressional District. The 18th, once Barbara Jordan’s district, had never elected a Republican. During the eighties, it had become 34 percent black and 36 percent Hispanic, but in 1991 the district had been redrawn to give it a higher percentage of blacks in the hope of making it an absolutely secure seat for a black candidate.

The Texas constitution requires the Legislature to redraw congressional districts every ten years following the federal census. For about one hundred years before 1991, Texas had, keeping in mind geography and the vagaries of population, regularly and logically shaped congressional districts. The one exception was the 6th, which was a thin bubble that stretched from Dallas to Houston and was drawn for the powerful congressman Olin “Tiger” Teague. In the eighties, despite the economic bust, Texas grew so rapidly that the state was awarded three new congressional seats after the 1990 census. The trick for the legislature in creating new seats in 1991 was, as always and everywhere, to carve the new districts out of the state while protecting the seats of incumbents.

Meanwhile, the federal government was looking over the Legislature’s shoulder. The Voting Rights Act of 1965 had been passed to safeguard the voting rights of minority citizens. Under it, certain states (Texas was included by judicial mandate in 1975) had to prove to the Department of Justice that any new redistricting plans would do nothing to dilute the strength of minority voters. Consequently, congressional districts in any number of states were drawn to ensure the election of minority candidates. In 1991 the Legislature figured that to comply with the Voting Rights Act it had to create three new districts that would elect minority candidates. Since a black had never been elected to Congress from Dallas, and since much of the growth in population had been among Hispanics in Houston and South Texas, its priorities were—besides protecting incumbents—to create a black district in Dallas, create a Hispanic district in Houston and another in South Texas, and strengthen the existing black district in Houston. The black district in Dallas became the 30th; the South Texas district became the 28th; the Hispanic district in Houston became the 29th; and Houston’s strengthened black district was the reconfigured 18th.

The assumptions behind the creation of these minority districts are that—given the choice between a member of their own race and a member of another—blacks, whites, and Hispanics will vote for members of their own race. The easiest way to create a black or Hispanic district is to draw one in which the majority of voters is black or Hispanic, something that can now be done with surgical precision by computer. The trouble is that in Houston and Dallas, blacks and Hispanics no longer live all together in a few neighborhoods, which is one of the clearest signs of social progress in the 29 years since the Voting Rights Act was enacted. In both Dallas and Houston collecting black voters into a single district means starting in the historically black areas near downtown and then reaching in long, crooked, unwieldy fingers out to the suburbs in all four directions. From the northernmost point of Houston’s 18th district to its southernmost is about thirty miles across the most populous county in the state. At the same time, the 18th surrounds the 29th on three sides. More than thirty miles long, east to west, the crooked fingers of the 29th grasp Hispanic voters, although the supposedly secure Hispanic district elected an Anglo, Gene Green, over a Hispanic candidate in 1992. In Dallas, creating the 30th district, now represented by Eddie Bernice Johnson, was complicated by the need to stuff black voters into it while protecting the Democratic incumbents Martin Frost to the west and John Bryant to the east. The results of the Legislature’s actions were districts so strangely shaped and so contemptuous to the traditional districting criteria of regularity, compactness, and contiguity that three federal judges recently called them “disfigured” rather than “configured.” And the insidious philosophy underneath it all is that while whites may have different communities of interests, blacks must have identical interests simply because of their race, whether they live in the inner city on welfare or live in the suburbs and work in a white-collar profession. By the same reasoning, Hispanics must have identical interests that are separate from those of blacks and whites no matter where they live, where they work, or what they may believe.

Enter Ed Blum. He had little party support in his campaign, few donors, and limited funds of his own. The only strategy he could afford was to meet as many voters as he could, face to face. From January until election day in 1992, he and his wife went door to door in every neighborhood in the district. He figures they eventually knocked on the doors of 25,000 homes. “We would map out our routes,” says Blum. “Then my wife would take one side of the street and I would take the other. We didn’t just amble along. We practically ran.” Blum received about 34 percent of the vote, 11 percentage points higher than President Bush got in the district. But looking back on the experience, Blum realized that what rankled him, strange though it may sound, was not the result of the election as much as the shape of the congressional district.

“Even with detailed street maps,” he recalls, “it was nearly impossible to determine who was in the district. I couldn’t always tell who I was running to represent.” The official maps were confused. Day after day Blum would see signs for candidates from other districts on the lawns of people in the 18th district. “I would walk down a block of a basic, garden-variety neighborhood and the people on one side of the street would be in one district and the people on the other side would be in a second district and in the next block, people would be in a third district,” he says. “Sometimes I would see a small apartment complex with blacks and two or three houses next to it with whites. The apartment complex would be in my district and the houses would be in another. I was new and naïve. I didn’t realize the Legislature systematically harvested whites and Hispanics out of the 18th and captured blacks and put them into it.” Segregating white and black voters into separate districts offended Blum’s sense of fairness and equality. “We used to have separate drinking fountains for blacks and whites and separate schools for blacks and whites,” he says. “We said that was wrong and got rid of it. So why today should we have separate congressional districts for blacks and whites?”

Inspired in the summer of 1993 by reading about Shaw v. Reno—a case brought by law professors at Duke University who had opposed two bizarre districts in North Carolina drawn to elect blacks to Congress—Blum decided to file suit in Texas. He would claim that the 18th and other congressional districts were unconstitutional because they were gerrymandered by race. He invited friends over to a Sunday night dinner to ask them to join him. He found Paul Hurd, a Louisiana lawyer who had tried a similar case, and after putting him up in his guest room in Houston for a night or two, worked out an arrangement for Hurd to work with local lawyers who had taken the case pro bono. Last August they won. A panel of three federal judges declared the 18th as well as the 30th in Dallas and the 29th in Houston to be unconstitutional. “It was the triumph of ordinary citizens,” Blum says. “And we did it because we believe so deeply in a color-blind society.”

The judges will allow the election this November to proceed with the old districts, but the Legislature must create a new districting plan by March 15, 1995. Dan Morales, the attorney general, has said he will appeal the decision, so it is unlikely that the final decision on this case or the ones in North Carolina and Louisiana will be decided anywhere else but the Supreme Court. It is in the justices’ hands to resolve the tensions between the demands of the Voting Rights Act for more minority officeholders and the flagrantly segregationist districts those demands have produced. If they uphold the Texas decision, that means the court has decided, as it should, that common local concerns—neighborhoods, schools, roads, quality of life—are more important than race, that those common concerns do more to unite people who live close to one another than their race can do to separate them.

Racially segregated districts make all those local forces impotent. Candidates cannot avoid campaigning about race because race is the only issue common to the district, and the winner will be the candidate who demonstrates the most extreme loyalty to his or her race. The result will be a Congress infested with David Dukes and Louis Farrakhans. In a naturally drawn district where races are mixed, the bigots on both sides who will vote only for a person of their own race cancel each other out, leaving the deciding votes to the moderates of any race and any party, who are, after all, the majority.