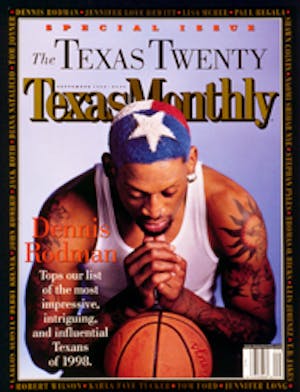 A high school English teacher and former tennis coach who has never published so much as a short story writes a memoir about life with his father, a school superintendent in a small town. There is no sex or violence, and the denouement is a downer: The father dies of a stroke after battling Alzheimer’s disease. The teacher sends what he has written to twenty publishers, but no one is interested. Discouraged, he gives up and leaves the manuscript at the home of a retired high school choir director, whose daughter reads it and begs him to keep trying. He reluctantly sends the memoir to one more New York publishing house, where it catches the eye of an editor who is astonished at the quality of the writing. The editor persuades his colleagues to make a deal.

It sounds implausible, but that’s how Into That Good Night, the modest but powerful new book by 46-year-old Lake Jackson resident Ron Rozelle, came to be published this August by Farrar, Straus, and Giroux, the home of such esteemed authors as Susan Sontag and Tom Wolfe. Ethan Nosowsky, Rozelle’s editor, says it has been five years since the company last published a manuscript that came in over the transom. He had been “delighted and surprised,” he said, when he looked at the first two chapters of Into That Good Night. “Am I hallucinating?” he asked himself. When he read on, he says, he was “overtaken by the strength and the vision” of the book.

Rozelle, who has taught English since 1981 at Brazoswood High School in Lake Jackson, first began writing the memoir in his classroom while his students worked on their own writing assignments. After his father’s death in 1992, he says, he felt the need to do something to get over his grief and to resolve a number of issues and questions about his past. His father, who served as the superintendent of schools in Oakwood, a town near Palestine, had been a pillar of strength, not just to his family but also to the community, particularly during the end of the segregation of the town’s elementary schools. Rozelle’s book recalls Texas during a simpler time. And unlike The Liars’ Club and a raft of other “dysfunctional” memoirs, Into That Good Night is a quiet paean rather than a startling exposé. “Oakwood was simply a wonderful place to grow up,” says Rozelle. He remembers watching television as a child and being puzzled by characters who were sad and lonely. “I thought, ‘Why don’t they just move to Oakwood?’”

If watching his once strong and self-reliant father slip away was almost unbearably sad, Rozelle has managed to reclaim a bit of the past through memory and art. In the process, he has carved out a literary future for himself. “There’s a great satisfaction in stumbling onto something like this,” Nosowsky says. “I think it goes to show that you don’t always have to have the right contacts or to have lunch with the right people to get published.”