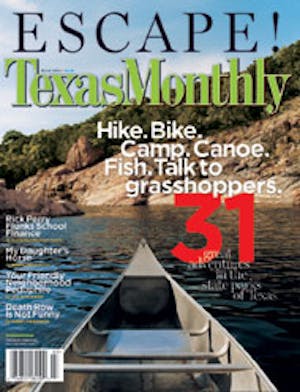 The Alamo: An Epic Told From Both Sides (2002), by Jack Jackson. This Austin-based author contributed raunchy comics to underground newspapers in the sixties. Today his pen-and-ink style—though still occasionally violent or risque—is also polished and appealing. Since Jackson is a historian and cartographer as well as a writer, his graphic novels deliver academic accuracy along with visual appeal. Check out his other Texas mega-comics, including the classic Comanche Moon, the story of Indian captive Cynthia Ann Parker and her son, chief Quanah Parker.

Alamo Movies (1991), by Frank Thompson. There’s only one thing wrong with this delightful compendium of Alamo movies: It’s out of print. But it’s well worth searching for. Thompson, a Hollywood screenwriter who has penned several other Alamo works, lists everything from the first film, a ten-minute moving picture in 1911, to a made-for-TV movie seventy-five years later starring a then-unknown Alec Baldwin. Thompson also includes lists of documentaries, lost films, movies with Alamo cameos, and more. To the publishers of Texas and throughout the world: Reprint this, with all dispatch.

The Alamo Reader: A Study in History (2003), edited by Todd Hansen. This is the book of the moment for Alamophiles, not only because of its immense size and scope, but also because Hansen, a University of Texas alum, is a dark horse among Serious Alamo Guys. The Reader divides its 837 pages into five marathon-length chapters, with each neatly organized around a general source of information on the mission-fort: the people inside it, the Mexicans and their allies, the residents of San Antonio and vicinity, and so on. This approach is a refreshing change from the usual chronological method, and Hansen provides apt, succinct annotations to boot.

Alamo Traces: New Evidence and New Conclusions (2003), by Thomas Ricks Lindley. An impeccably researched book, Alamo Traces was fifteen years in the making. Lindley haunted libraries around the state and consulted thousands of sources. Much of it is likely too esoteric for the average Sunday-afternoon scholar, but the chapter on Sam Houston and the material on the de la Pena diary are worth a careful perusal.

Blood of Noble Men: The Alamo Siege and Battle (1999), Alan C. Huffines. Huffines is a revisionist and one of the two main consultants on the new Alamo movie starring Billy Bob Thornton and Dennis Quaid, so you know he’s not going to take the “Give ’em what-fer, Davy” route. The title alone lets you know his book is far from a cold, dry tome, and because Huffines is a non-academic historian, he doesn’t let his prose bog down in pedantic mega-minutiae.

Eyewitness to the Alamo (1996), Bill Groneman. Eyewitness is an effecting and highly traditional view of the siege and fall of the Alamo. Like Huffines, Groneman is a self-trained Alamologist, but unlike him, the former New York City fire captain is a staunch supporter of the romantic to-the-death view. The author became famous (and, in some circles, reviled) when he challenged revisionist academics by writing Defense of a Legend: Crockett and the de la Pena Diary, an assertion that the valiant Davy fell in combat along with his fellow defenders.

The Gates of the Alamo (2000), Stephen Harrigan. This big, fat, juicy book will surely discourage anyone else from attempting an Alamo novel for at least a couple of decades. It’s well-grounded in historical fact and sprinkled with tributary trivia, such as Santa Anna’s role in the creation of chewing gum. There’s also an atypical love story, scads of curious botanical knowledge, and—oh, all kinds of other reinforcements (and they show up in plenty of time). You’ll need a hanky, not just while you’re reading it but also afterward, ’cause believe me—you’ll feel downright depressed when there are no more pages to turn.

Texian Iliad: A Military History of the Texas Revolution (1994), by Stephen L. Hardin. The author, a Victoria College history professor, was also an adviser for the new Disney movie. His Alamo chronicle is detailed to a fare-thee-well and distinguished by its devotion to the military decisions, maneuvers, and errors made by both the Texian defenders and the Mexican attackers. Texian Iliad also wins Best Title Award.

Three Roads to the Alamo: The Lives and Fortunes of David Crockett, James Bowie, and William Barret Travis (1998), by William C. Davis. Heavy-duty chronological history interweaves the lives of Davy Crockett, William Barret Travis, and Jim Bowie into the moment they met and fought together (it could be subtitled: The Bridge Over San Antonio Rey). Davis is a Virginia Tech professor, so this is a Real History Book that requires concentration, but it’ll fer sure larn ya somethin’. Two other good overviews: The Alamo Story: From Early History to Current Conflicts (2000), by J. R. Edmondson, and A Line in the Sand: The Alamo in Blood and Memory (2001), by Randy Roberts and James S. Olson.

A Time to Stand (1961), by Walter Lord. A classic and unassailable fortress of a book, A Time to Stand inspired every writer on this list. The text’s historical underpinnings are solid, but it’s Lord’s literary charisma that transforms A Time to Stand. He has a way of humanizing the players (Lord even occasionally calls Travis “Bill”) and he also manages to convince his readers that the Alamo’s fall was not just a Texas watershed but an American tragedy. Lord, by the way, had previously written A Night to Remember, a reading of which beats watching the movie Titanic any day.

Voices of the Alamo (2004), written by Sherry Garland and illustrated by Ronald Himler. This brand-new picture book combines the talents of a veteran children’s writer and an award-winning artist to present the Alamo and the battle’s fallout from the Texan point of view as well as from the Mexican and Tejano perspective, both then and now. It’s an attempt to counterbalance the long list of shamelessly Alamo-as-shrine books that have been churned out for well over a century.

Davy Crockett: King of the Wild Frontier (1955). Maybe you had to be there—in the fifties, that is (or the sixties or seventies: The show had remarkable stamina). This saga of a multitalented pioneer—Indian fighter, Tennessee statesman, and Alamo defender—may seem utterly dumb to anyone born after, say, 1980, but it was the most influential show in the U.S. for the better part of two decades, and it made stars of two men who were, up till then, essential no-names—actor Fess Parker, and his character, frontiersman Davy Crockett. Parker’s portrayal sparked a craze that rivaled any later superhero’s, and Crockett became the ultimate icon of American folk history. I admit that parts of this Disney movie make me roll my eyes—but the ending still chokes me up every time.

The Alamo (1960). Arguably the most written-about historical movie ever, The Alamo was John Wayne’s all-or-nothing directorial debut. He also produced it, and spent a total of fourteen years and $10 million laboring to bring the epic to the screen. The Duke, of course, could play only the fabled Davy Crockett; he cast son Patrick as James Bonham and daughter Aissa as the Dickensons’ child. The final version of the movie, shot near Brackettville on a sprawling set that included a replica of the mission and its many outbuildings, ran more than three hours and yielded many lines that have become part of American pop-culture lingo, such as Wayne’s line “Republic . . . I like the sound of the word.” It’s a must-see for any Texas loyalist or American film buff.

The de la Pena Diary (2000), by Brian Huberman. This hour-long documentary about the Mexican officer’s famous memoir is the work of a Rice University professor who was a Davy maniac during the fifties and sixties in England, where he was raised. The video is difficult to find for rent but can be purchased through Amazon and other online sites. Huberman also shot an another excellent documentary on the making of John Wayne’s The Alamo, and—much earlier in his career—he was the cinematographer for 1984’s acclaimed independent Last Night at the Alamo, in which the Alamo in question is a ragtag Houston bar.

Asleep at the Wheel Remembers the Alamo (2003), Asleep at the Wheel. The peachy-keen CD is by Texas’s greatest living western swing group, headed by the inimitable Ray Benson and admired as the winner of eight Grammy awards. It contains everything from “Ballad of the Alamo,” the theme song from Wayne’s movie and the unofficial anthem of a generation, to “Across the Alley From the Alamo,” which is indubitably the Wheel’s kind of song (though it may puzzle younger fans with its cryptic references to “Duz” and “Lux”). It also includes the sobering “Deguello” (which translates as “throat-slitting”), the slow, ominous song played by the Mexican army’s band to warn foes that there would be no mercy for survivors. If you prefer music with a Scottish lilt, folk singer Carl Peterson (www.carl-peterson.com) offers a double-CD set called Scotland Remembers the Alamo, which includes many nineteenth-century tunes that might well have been scratched out on the fiddle by Davy Crockett to entertain his fellow defenders during lulls in the siege.