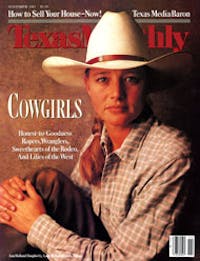 How important is basketball star David Robinson to San Antonio? More important than the pope, said Spurs chairman Angelo Drossos. Critical to San Antonio’s vision of itself as a major league city, said Mayor Henry Cisneros. Our raison d’être, said several members of the Baseline Bums, the Spurs’ clique of hard-core supporters. The pope had been in San Antonio a week earlier, but when the Spurs’ top draft choice came for a visit in September every effort was made to present Robinson as the true Second Coming.

Robinson’s visit cost the Spurs an estimated $50,000, and its single purpose was to convince the young prospect—and possibly the Spurs themselves—that San Antonio is not the country’s largest bush league town. Robinson, his family, an agent, and the agent’s assistant were flown to San Antonio in a chartered jet, put up at the swank St. Anthony hotel, toasted at private parties, welcomed at Dominion Country Club, and treated to enough platitudes to cause terminal tooth decay. The Spurs knew that the gala weekend wouldn’t result in Robinson’s signature on a contract: Money couldn’t be discussed because of a temporary moratorium on National Basketball Association contract negotiations. The former Naval Academy All-American won’t even be available to play until the fall of 1989, after he completes his two-year obligation to the U.S. Navy. There is no guarantee that San Antonio will have an NBA franchise in 1989. The Spurs are in deep trouble, spiritually and financially. All they were looking for from Robinson was a sign, a gesture, a wink of understanding. They didn’t get it.

Even as the dog and pony show was being assembled to greet Robinson, there were ominous signs. A thunderstorm ripped across San Antonio, destroying the Spurs’ hopes for a big crowd at the airport; they were hoping for 10,000 fans, but fewer than 700 showed up. Most of the Bums themselves couldn’t even turn out. Fewer than a dozen of their fifty members, resplendent in black-and-silver T-shirts and pom-poms, made an appearance. There was the usual collection of reporters and photographers elbowing politicians and dignitaries for position. While the Bums chanted Robinson’s name and danced about like Lilliputians, a welcoming committee from the chamber of commerce rolled out a faded red carpet, which neither Robinson nor his party appeared to notice.

Except for producing an eight-minute media conference at the airport and another short conference a few hours before Robinson and his entourage left town, the Spurs seemed intent on shielding Robinson from San Antonians and San Antonio from Robinson. It was not easy to shield a man who is seven one, but most people who got a glimpse of the prospect either didn’t know who he was or didn’t care. No private interviews were permitted, and as far as I could tell none were demanded. Dan Cook, the dean of San Antonio sportswriters, didn’t bother to show up at either press conference, but he did write Robinson an open letter in the Saturday Express-News. While conceding that San Antonio didn’t have the glitter of Los Angeles or the fast pace of New York, Cook reminded the 22-year-old ensign that there was no more perfect city for retired military. “If you hang out here long enough to wear out a pair of shoes, you’ll probably never leave forever,” wrote the veteran sports scribe.

Saturday was devoted to a helicopter tour of the city with the mayor, some tennis and golf at the country club, and a private dinner at La Provence. Golfers who were lined up in a convoy of carts behind Dominion’s first tee barely looked up as the helicopter set down near the country club’s baroque clubhouse. A few members paused to watch Robinson play a tennis doubles match, intrigued no doubt by the athlete’s costume—red-and-yellow shorts and a white T-shirt with palm trees. “Know who that is?” a father asked. “The new Spur?” his daughter replied. “Hopefully,” said the father. They walked away.

The country club is northwest of the city, in the cedar hills, which explained why Robinson and his parents were impressed by all the greenery. “We were expecting desert,” said Ambrose Robinson, David’s father, a retired Navy man who works as an electrical contractor in Woodbridge, Virginia. Being a civil engineer himself, David had been interested in the helicopter view of the Sea World construction site. “That’s the most excited I saw him all weekend,” said Cisneros, unable to resist plugging his product. The Spurs neglected to show David the Alamo or the King William district or any of the other landmarks that make San Antonio so charming and unique. The country club and the other fancy places on the official itinerary might as well have been in New Jersey. Robinson’s only opportunity to mingle with the plebians was when Alvin Robertson and some other players took him to a night spot called Broad Street.

At a press conference shortly before he left, Robinson thanked the city for its warm reception but said that this was the kind of decision that would take a while. “I have to do what’s best for me,” he said. There were no Baseline Bums outside the Spur’s office at Hemisfair Plaza as the party made its way back to the hotel, only a few passersby and a lone woman toting a Spuds MacKenzie poster, chanting “Da-vid, Da-vid.”

“David Robinson is a once-in-a-lifetime opportunity for us,” says Drossos. Yet neither Drossos nor any of the other club officials had met Robinson until the player’s visit to San Antonio. Robinson is an impressive young man. He is polite, thoughtful, and unusually composed, and though basketball is important, it is not his life. He wasn’t even a pro prospect until his sophomore year at the academy. “David always cared about academics more than he did sports,” said his mother, Freda Robinson.

It is the Spur’s position that under the armed services clause in the league by-laws, the team retains Robinson’s signing rights until thirty days after he is separated from the Navy. That interpretation is subject to dispute. If Robinson doesn’t sign with the Spurs by spring, the players’ association believes, he can reenter the draft pool in 1988. And if he still declines to sign, he can be a free agent by June 1989, enabling him to join the team of his choice. In the meantime he is heavily insured against a career-ending injury.

The Spurs are a young team in a city with big plans, but that’s all they have to sell. If Robinson is looking for the sort of contract the New York Knicks gave Patrick Ewing, the league’s top draft pick in 1985—a ten-year package totaling $30 million—he’ll have to look to one of the richer franchises. If he just wants a place to retire, San Antonio is not bad. It’s not a bush league town by any means, but the Spurs may be an organization that belongs in one.