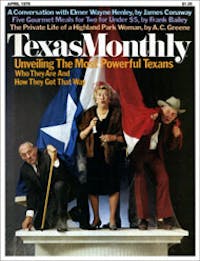 In 1973, Dallas artist John Fleming imprinted plain white stationery with the kind of third-rate drawings and photographs usually found illustrating cheap advertisements in the backs of movie magazines. Fleming packaged the stationery (along with envelopes, two Koh-I-Noor pencils, one Eberhard Faber eraser, and a plastic pencil sharp­ener) in an edition of 100 boxes, labeled them Stationary, and pro­nounced them works of “usable art.”

Suddenly, stationery was pop art, and pop art, at $50 a box, was actually used as stationery, used widely enough, among a network of artists, musicians, and patrons of both, to prove the point that there is no longer anything very stationary about stationery.

Changes in the etiquette of corre­spondence began when the telephone threatened to do to writing papers what paper napkins had done to fine linens.

Certainly telephoning was not as nice as writing, but it was faster, easier, and cheaper. We might have stopped writ­ing letters completely except for one small fact . . . getting a letter is more personal, more important, and a lot more fun than a phone call. So, we dropped the bothersome do’s and don’t’s that our mothers and Emily Post taught us and, except for the most formal or important correspondence, the rule be­came “fun papers.” This relaxed eti­quette kept letter writing alive as an art in an age when few people have the time, the money, or the energy to be very creative in their day to day dealings with each other. Today paper napkins printed with everything from the family crest to the single supergraphic word EAT are found on all but formal Texas tables, and we have taken “acceptable” writing papers to the same extreme.

At the same time, more and more of us, even though we may still serve din­ner with paper napkins, blanch when we sit down to write a letter and find that our only stationery is parrot green and our only pen a purple Bic banana.

Perhaps it is only nostalgia for the more proper past or for the pleasure of using fine hand-crafted goods, but today we seem to be coming full circle, back to the formality of another time.

Texans already buy more engraved sta­tionery than the people in any other state in the nation, and are, this year, ordering more fine stationery than ever before.

For some people, the act of writing a letter has become as important as what is said, and the paper on which the letter is written an essential, self-designed part of the message. Their work has become an art form, corre­spondence art, and some of the best of it comes from Texas. Businessman and art impresario Stanley Marsh III of Amarillo uses a custom-built oversized typewriter to write letters on a paper that measures over twice the size of this magazine. Why? In the top left hand corner of the back of his post card is a quote from Newsweek, “Stanley Marsh… the first man in the world to collect the experience of art, rather than its material form.” Exactly. Getting a letter from Stanley is an ex­perience… rather like being invited to watch Paul Morrissey film an Andyl Warhol movie that you don’t have to be in.

At another extreme some people have completely given up the experi­ence of writing a letter and turned to “canned communications.” Here the medium is the message, the stationery leaving either nothing more to be said, or far more to be said than the sender intends to write. The success of this sort of stationery depends on the impact of the design and the message, and is con­sidered “fun” only as long as it’s novel, which usually isn’t very long.

Others enjoy finding unusual and eco­nomical papers buried beneath the bric-a-brac and obsolete atlases in Texas an­tique shops and second-hand book stores. Writing notes to friends on old postcards has been a fad for some time, but most of the people who use old postcards now collect them. Friend­ships are weighed by the uniqueness of the cards exchanged; unless one’s friend ships, or one’s friends’ collections, are rare, the cost is seldom more than 5 cents to 50 cents a card. The Twenties invitations were found in a Dallas an­tique store for 10 cents a box. Unbroken boxes of old stationery are rarer, so they are the most exciting of the old papers to discover. The box of Bryan Air Force Base Stationery came complete with papers and envelopes bearing the pale image of fighter planes in forma­tion—all for 35 cents.

Richard Clifford, owner of The Penny Dread­ful Crafts Arcade in Fort Worthy, is one of a growing number of craftsmen of handmade pa­per. He custom-makes papers—from virtually anything with a high fiber content—in weights and textures quite suitable for folded notes or postcards. Shown are a few of our favorites, made from scratch by Clifford from Kellogg’s Corn Flakes and newspaper, from lettuce and cabbage, and from onions.

Fun papers are not always funky. Neiman-Marcus, Tiffany’s, the Junior League Imprinters, and fffolio in Dallas, as well as stationery shops across the state, do an enormous business in mono-grammed or custom-designed informal papers. The crème de la crème of fun papers, however, are designed by Houston artist Honey Beeman. Her combination of subtle personal messages with fine paper and fine art make her papers not as formal, but certainly as fine as the loveliest traditional hand-engraved note. Shown is a “Honeygram,” from a series of four designs of ten prints each that she created for personal use.

Don’t be surprised if these papers look familiar. . . they belong to Charlotte and David Hafter. In 1927, when Stanley Marcus opened a stationery shop (his first department in his family’s store), he convinced a young lady named Char­lotte Hafter to come from New York City to Dallas to be stationery buyer. For the next 41 years, in the grand Neiman’s tradition of teaching rich Texans how to spend their money, Charlotte Hafter set the standards of proper correspon­dence. Fortunately, her taste was, and is, impeccable and her energy enormous. She not only designed and selected much of the stationery used by two genera­tions of Texans, but also created dies for engraving and designs for papers that influenced the entire stationery industry. She retired in 1968, leaving Neiman-Marcus probably the largest distributor of fine Crane’s papers, our state the home of more fine commercial engravers than any other state in the nation, and Texans leading a revival of the refined art of letter writing.