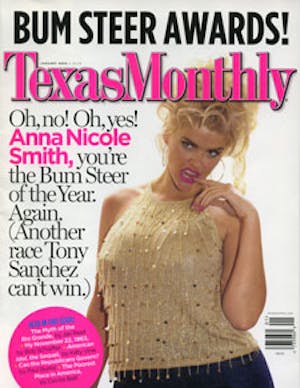 THE CABLE GUY Conservative political columnist Robert Novak, the co-host of CNN’s Crossfire, will speak at the University of Texas at Tyler’s R. Don Cowan Fine and Performing Arts Center on January 30.

You’ve cultivated this image of yourself as tough, even mean, but everyone I know in Washington says you’re a pussycat.

That’s really not true. I’m fairly vicious. Since I’ve become a Catholic, I’m a little better than I was, but I’m still pretty mean. People misunderstand me because I smile a lot.

You became a Catholic?

Why did you convert?

The Holy Spirit came to me. If you’re not Catholic, you won’t understand.

Did I hear you right? Your wife is from Texas?

She was born and raised in Hillsboro.

Why did she leave?

Why would anyone want to leave Texas—is that what you’re asking? Right out of high school, Geraldine took a job with Sam Johnson, who was the local district attorney. From Johnson she got to state senator Crawford Martin, who would later become the state attorney general and was a great ally of Lyndon Johnson’s. LBJ was looking for a secretary in his Austin office, and at Martin’s suggestion, Geraldine went to work for him. Eventually he brought her up to Washington. She traveled with him during the 1960 campaign and was one of his secretaries when he was vice president. She quit when we got married, in November 1962. Back then it was considered a conflict of interest for a journalist’s wife to be working for a major politician. When JFK was killed the following year, Johnson asked her to come back, but we decided it wasn’t a good idea because I was sure to be critical of the president.

Okay, here’s what I really want to know. Who is the one Democrat you’re afraid of in 2004?

Al Sharpton. Just kidding. Can I rephrase your question to be, Who would be the strongest Democratic candidate in 2004? I think the Democrats have a huge problem. Weak national defense and high taxes and big government—the dogs don’t want to eat that dog food. I can’t imagine the Democrats coming back unless one of two things happens. There has to be an economic collapse, which is not likely, or there has to be a war with bad political consequences, one that drags on or is more bloody than we expect or isn’t successful militarily.

C’mon. You can’t give me the name of one Democrat?

In all candor, I can’t. Do I think John Kerry is probably a better candidate than Gray Davis? Yes. Does he look like a winner? Not to me.