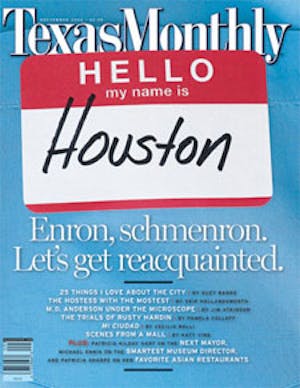 THE STORY OF RICE UNIVERSITY—Houston’s esteemed private institution of higher learning—begins with a classic whodunit. Who murdered millionaire merchant William Marsh Rice? Who scammed the money he bequeathed for a free institute “dedicated to the advancement of literature, science, and art”? Well, the butler, of course, along with the lawyer, in the bedroom, with the chloroform.

William Marsh Rice made his millions wheeling and dealing in Houston’s business sector. The Massachusetts-born entrepreneur dabbled in banking, railroads, cotton, and real estate. In the late 1880’s Rice was approached with a philanthropic endeavor: finance the city’s first public high school. Rice tweaked the proposal, and in 1891 he agreed to donate his riches to an institution with a to-be-determined format. Upon his death, a board of trustees was set to receive the fruits of a $200,000 interest-bearing note and instructed to give the educational establishment direction.

But at the turn of the century, Charles Jones and Albert Patrick had other designs for Rice’s money—personal ones. Jones, Rice’s personal servant, and Patrick, a former Texas lawyer, conspired to knock off the aging Rice and put his estimated $3 million into their pockets via a forged will. But perfect crimes are nonexistent, and most whodunits are cracked and decoded.

Rice’s estate was rightfully settled in 1904—$3 million was given to the institute in addition to the initial investment, which had grown to $3.3 million. When the doors to Rice University opened in 1912, William Marsh Rice’s donation totaled almost $9 million and enabled all students to attend free of charge, a practice that remained until 1965.

In 1907 Rice’s board of trustees tapped mathematician and astronomer Edgar Odell Lovett as the university’s first president and gave him the not-so-small task of planning its future. Determined to mold Rice into a university of the “highest grade,” Lovett put ten internationally renowned professors on the payroll, contracted a well-known architectural firm from Boston to construct the edifices of academia, and welcomed 77 students to campus for the university’s first year. In 1916 the university instituted its Honor Code and founded its independent student newspaper.

In 1964 William Marsh Rice’s initial charter was amended on two accounts: Students would now be admitted without discretion toward race, and tuition would be charged. The free-spirited sixties and seventies brought about heightened emphasis on the humanities and social sciences at Rice. The university provided land for NASA’s Manned Space Flight Center (now the Lyndon B. Johnson Space Center) and founded the nation’s first department of space science. Today Rice continues to attract some of the most intelligent students from the country and abroad and strives for the “highest grade.”