From the moment that federal agents blundered into their frontal assault on the Branch Davidians’ armed fortress on the morning of February 28, David Koresh knew that God had finally delivered the enemy into his hands. For nine years Koresh had relentlessly drilled his followers to prepare for Armageddon, had preached its inevitability, had forecast its imminence. This was the ending that Koresh had prayed for and staked his reputation on—the final battle, the trial by fire. It didn’t matter if the fire came from automatic rifles or a match and a can of kerosene; this was what Koresh had promised. Anything less would have been a monumental betrayal of his claim to be David Koresh, Angel Warrior of the Armageddon. Did anyone really expect the prophet of Ranch Apocalypse to meekly surrender his sheep to the enemy and come out with his hands up?

The first thing to understand about Koresh is that he invented himself. “Koresh” is the Hebrew name for Cyrus, the Persian king who allowed the Jews to return to Israel. It means “a lot of fire.” Koresh was a con man who got caught up in his own duplicity, a pathological liar who long ago lost the ability to distinguish fact from fantasy. Raised in the Seventh-day Adventist Church in Tyler, Koresh (or Vernon Howell, as he was known then) came by his doomsday mentality early in life. Seventh-day Adventists are conditioned by their faith to expect end-of-the-world prophets and to listen to anyone who claims to be anointed, however tenuous that claim may appear to nonbelievers. The Branch Davidians are an offshoot of this faith, founded by a Bulgarian immigrant named Victor Houteff who broke with the mother church over his interpretation of the books of Ezekiel and Revelation. In 1935 Houteff moved from Los Angeles to Waco and established the world headquarters of his sect. After his death, a succession of leaders emerged, each putting his or her own spin on the book of Revelation, each gaining and holding power by predicting the date when time would end. Koresh was merely the most recent (though surely the most infamous) of the cult’s roster of doomsday forecasters.

A pivotal year in the cult’s history was 1959. Florence Houteff, the widow of the founder, predicted that on April 22 of that year God’s kingdom would come. Her prophecy caused followers all across the country to quit their jobs, sell their possessions, and move to Waco to await the end. But the world did not end—a historical nonevent known among Branch Davidians as the Great Disappointment. Something did happen in 1959, however, that would drastically affect the lives of the faithful. That was the year that Vernon Howell was born. A good con man would have connected those two occurrences—the failed prophecy and his own fortuitous birth. A good con man also would have known that Jesus Christ died when he was 33. So did David Koresh.

Howell/Koresh was obsessed with sex and power and used one to get the other. In 1980, when he was just 21, Howell tried to convince the pastor of the Seventh-day Adventist Church in Tyler that God had told him to sleep with the pastor’s young daughter. The pastor reacted by forbidding Howell to see the girl, and a year later, Howell was kicked out of the church for leading unauthorized Bible studies and preaching from the pulpit without permission. A few years later, he popped up at the Branch Davidian compound at Mount Carmel, confessing to the cult’s leader, Lois Roden, that he was worried about his excessive masturbation. Howell eventually seduced the 67-year-old Roden and said that he had impregnated her—”gave her seed” as he phrased it. When she said she had miscarried, he explained to her followers, who were now his followers, that the miscarriage was God’s way of punishing the old lady for squandering the church’s money.

In 1984 Howell took as the first of his many wives fourteen-year-old Rachel Jones, the daughter of longtime cult member Perry Jones. Over the next several years he slept with many women and girls, some of them the wives of followers, some of them as young as twelve, always saying that he was merely obeying God’s command. Koresh had memorized long passages of Scripture and could always find a biblical reference to explain or rationalize his behavior. For example, the “oil of gladness” mentioned in the Forty-fifth Psalm as the substance of choice when anointing the king was a reference to vaginal secretions—at least according to Koresh. When it came to sex, no suggestion seemed too outrageous, no line of reasoning too vulgar. “There’s only one hard-on in this whole universe that really loves you and wants to say good things about you,” he reportedly assured his female followers, comparing their relationship with him to that of Mary’s with God.

Convincing the Branch Davidians that he was the Lamb of God foretold in the Book of Revelation was not as tricky as explaining to the cult his strange and brutish behavior, but Koresh was equal to the task. The purpose of his Second Coming, he told the faithful, was to supervise Armageddon and make the difficult choices on Judgement Day. For that reason, he needed to indulge in all the sins and degradations of man, so that when the day came, he could speak from experience. Incredibly, both the men and the women of the cult bought this line. Woman competed to be his favorite. One man said that he was convinced of Koresh’s sincerity when Koresh admitted openly that he was having sex with both a 14-year-old and a 67-year-old. The man reasoned: Who but the Lamb of God would have had “the guts” to admit such a thing? In a similar situation, Jimmy Swaggart had tried to blame the devil. Koresh was blaming God and getting away with it.

The more Koresh got away with, the more he was willing to try—and similarly, the weirder things got, the more the Branch Davidians believed. Koresh’s most outrageous revelation—he called it the New Light—came in August 1989, when he announced that all earthly marriages were annulled and that henceforth all the women of the world belonged to him. The Song of Solomon entitled him to sixty wives, eighty concubines, and “virgins without number,” Koresh explained. The pronouncement of the New Light had a devastating effect on married couples within the cult. Some of them couldn’t handle it and left. Others accepted their fate. Steve Schneider, the second-in-command, wept bitterly as he gave his wife, Judy, to the Messiah. From that point on, all of the men were expected to be celibate. Even masturbation was prohibited: All seed except that of the Lamb was unholy. Thus the men of the cult were reduced to eunuchs, even as the women—at least those chosen to receive the seed—became vessels of the harem in what Koresh called the House of David. By dissolving all sexual unions except for his own, Koresh had greatly reinforced his control.

While it was true that Koresh preyed on the pathetic losers of the world—the disenfranchised, the weak-willed—not all the Davidians were dummies. Schneider had a bachelor’s degree in religion. Douglas Wayne Martin, the cult’s number three man, was a graduate of Harvard Law School. Many Davidians were better educated than Koresh, who had dropped out of school after the tenth grade. But those who stayed with Koresh had one thing in common, something Koresh counted on: They were true believers. For them, David Koresh was the way—the only way—to heaven. They believed that they had been given a peek at eternity, that however awful and apocalyptic it might be, they were among the chosen. Some compared the experience to being on drugs.

Using classic mind-control techniques, Koresh created within the compound a crisis mentality, constantly preaching that the end of the world was upon them, constantly demanding that they prepare themselves. “You don’t have time to think,” one member told the Waco Tribune-Herald. At five-thirty each morning, all of the Davidians were awakened by the clanging of a bell—all except Koresh, who usually slept until about two in the afternoon. The men ran an obstacle course, then spent the day doing hard labor. While performing these strenuous activities, the drinking of water was not allowed. The women marched in formation, chanting Marine-style marching songs about killing Babylonians—not once but three times a day. Arbitrary rules instructing cult members what and when to eat—one meal a day was normal—changed without warning, and anyone who violated them (eating oranges and grapes at the same meal, for example) was publicly humiliated and sometimes flogged. By midafternoon, when the troops were exhausted, Koresh was just crawling out of bed and ready for some marathon Bible studies, which sometimes lasted all night. During some of these sessions, cult members were not allowed to eat, drink, or even use the bathroom.

Koresh was not a master orator—his voice was whiny, almost effeminate—but his spitfire delivery had a hypnotic quality that dazzled and confused his listeners and made them afraid to acknowledge that they didn’t understand the message. Roaming freely among chapters of the Bible, Koresh ticked off arcane passages and sprinkled in quotes from Winston Churchill and Jean Jacques Rousseau. When sessions ended, cult members staggered off to bed and Koresh went to his private quarters to practice his guitar, usually at top volume, and indulge in sex. It was all so easy for Koresh. When eating one meal a day became uncomfortable, he announced that God had told him to eat all he wanted. Then God allowed him to drink the previously forbidden Coke, then the previously forbidden beer. Whatever earthly pleasure tempted David Koresh, God was sure to tell him that it was okay to have it.

If a Prophesy didn’t work out, Koresh simply issued a new one. He predicted that his rock band would spread his message across the world, but it barely got to the city limits of Waco. He predicted that Armageddon would begin in the Holy Land with the invasion of American armed forces; he even went to Israel to supervise the upheaval. When that one didn’t pan out, he changed his story and said that the final battle would be in Texas, that the Branch Davidians should wait at Mount Carmel for Armageddon, which would begin with an attack by the American military.

When the armed forces did attack, the hail of fire must have been a tremendous relief not only to Koresh but to everyone inside the compound. They had waited so long. The Waco Tribune-Herald quoted this passage from the writings of one member: “. . . in the quiet evenings, an introspective, self-absorbed malaise seemed to overshadow the place as individuals perhaps contemplated their grim future. The only consolation was that the world would get it even worse.”

For 51 days federal agents camped outside the compound, paralyzed by their own ineptitude, while this notorious liar and con man was permitted to broadcast his incoherent message to the world. The authorities must have known that it was all a sham—the new orders from God, the celebration of Passover, the writing of his long-awaited manuscript revealing the mysteries of the Seven Seals—but Koresh had given them no choice. The feds were the hostages, the ones who were surrounded without hope. They kept assuring us that they weren’t about to be drawn into a firefight, then permitted exactly that to happen. They told us that suicide wasn’t in Koresh’s plans, and they were right, but in a way they never seemed to comprehend. What happened at Mount Carmel was not suicide; it was Holy War. Just as Koresh had prophesied. 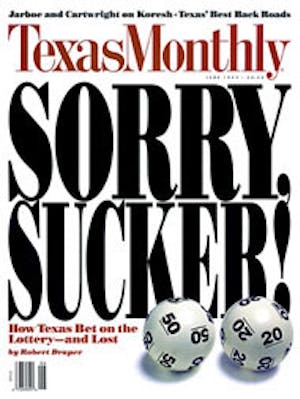 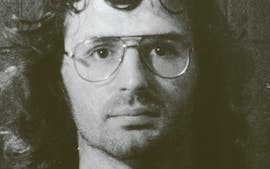 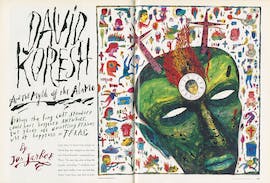 David Koresh and the Myth of the Alamo