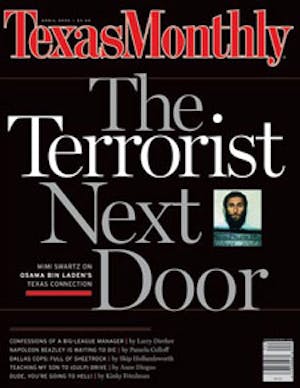 SOMETIME BETWEEN THE involuntary hip spasms brought on by Congolese singer Ricardo Lemvo’s soukous band as I nibbled on fried bananas and the melancholy induced by Irish folk-rocker Paul Brady’s antihero anthem “Nobody Knows” as I wolfed down fish and chips, the full scope and substance of the Houston International Festival hit me. I also had the option of hearing other musicians from the “spotlight nation” of Ireland, such as the earthy-yet-ethereal jam band Kila, as well as Ghanaian master drummer Obo Addy and the band Kukudru. I saw American music icons like bluegrass patriarch Ralph Stanley and Texans like Houston boogie-blues guitarist Texas Johnny Brown. Former Texan Lucinda Williams performed songs from her then-unreleased Essence, and British folk-rocker Richard Thompson played a rare solo acoustic set.

Over two weekends last April, the HIF ran from noon to eight on eight downtown stages surrounded by food booths ranging from “Texas traditional” (funnel cakes) to “Houston ethnic” (Jamaican jerk chicken) and crafts vendors from Africa to the Caribbean. World-class dance companies, street-theater troupes, and children’s entertainers rounded out the bill. The festival drew sizable crowds without being uncomfortably packed, and the audience—decked out in Malaysian sarongs, Indian saris, African dashikis, and skate-punk shorts—was a show in itself.

So I have no trouble touting this year’s festival, which runs during the last two weekends in April and features France as the spotlight nation. The HIF has become one of the premier musical events in the state. Artistically, there’s nothing else like it hereabouts, though the annual Tejano Conjunto Festival in San Antonio does an exemplary job of presenting the genre’s music, and that city’s yearly Texas Folklife Festival offers the full range of ethnic sounds indigenous to the state (but doesn’t feature touring international stars). According to the International Festivals and Events Association, the HIF is the best-attended performing-arts show in the nation and ranks with the Edinburgh International Festival in Scotland and the Salzburg International Festival in Austria. The HIF is the place to hear music, both exotic and accessible, that you’re not likely to find anywhere else, all at decidedly low-risk prices (daily tickets are $8 in advance, $10 at the door; children under ten are free).

To most of the world, Houston’s image has been shaped by oil, urban cowboys, and now Enron, but even some locals don’t realize that America’s fourth-largest city is one of its most international. That multicultural flavor was the first thing HIF president Jim Austin noticed in 1986 when he took over the financially troubled Houston Festival, as it was then called, the city’s annual arts and crafts celebration. Austin, a native of Memphis, Tennessee, and a “so-so” guitarist with a doctorate in philosophy from Oxford University, had learned the civic-festival business while working for Memphis in May, a yearly music blowout and barbecue cookoff. “The celebrations that are successful, like New Orleans Jazz and Heritage, share a common characteristic in that they celebrate something indigenous to the city, something that’s the heart and soul of the city,” he explains. “When you come into Houston from the outside and look at it with fresh eyes, the obvious thing is that it’s such an international culture.”

At 56 years old, Austin is a child of the sixties, firm in his belief that music can be not only entertainment but also a cerebral, spiritual, and unifying force. For him, that originally meant Bob Dylan, Jimi Hendrix, the Beatles, and the Stones, but when he was in England from 1978 to 1980, he discovered many of the world-music stars who were based in London or Paris. His notion of hip music was reshaped, in particular, by Afropop stars like King Sunny Ade and Youssou N’Dour, who had huge global followings but remained obscure in America. By the time Austin arrived in Houston, the CD boom had created a world-music cult among American rockers while also serving the nation’s increasingly diverse immigrant population. Austin’s idea for transforming the festival was to use diverse Texas music to supplement world sounds that would be accessible to audiences but weren’t ordinarily heard on the radio.

He changed the event’s name in 1987 and made Australia the first spotlight nation, with highlights such as the Midori Aboriginal Troupe. Spotlighting one country, Austin points out, serves a specific purpose. “The focus changes every year,” he says, “and that makes you want to come back every year.” Featured nations also underwrite costs and help with promotion. The festival’s global reputation grew steadily enough that by 1994 Austin could book his first international superstar, northern Mali “river bluesman” Ali Farka Touré. “He played in a downpour, outdoors, and I think there were fourteen of us there,” Austin recalls. “But we saw that this kind of programming could work, and we decided to stay with it.” Since then, the HIF has offered many of the biggest names in world music, from jazzy, introspective Brazilian star Milton Nascimento to the electrified traditionalism of Zimbabwean Thomas Mapfumo. The festival has been crucial in helping such international stars as high-tech Mali singer Salif Keita and dance music queen Angélique Kidjo of Benin to break out in America.

That’s how the HIF covers the musical front. But recognizing that he was, as he puts it, “a white kid from Tennessee coming in to tell people we’re gonna bring everyone together,” Austin also had to become a diplomat. His first move upon arriving was to talk his board members into diluting their own authority by expanding from 25 members to 40, and then 50, to better reflect Houston’s diversity. A variety of posters were printed so those that went up in the barrio were in Spanish and those in Chinatown were in Chinese. Working with local preachers and politicians, the HIF created alliances between African tribal peoples traditionally at odds with one another and then reconciled them with African Americans. Austin eventually established an educational program that produces a massive curriculum guide on the spotlighted nations that’s studied by about 800,000 school kids. “When the festival actually arrives, it’s like they’re going to Disneyland,” he says. I can’t help but think that the event also influences the city’s self-image. Civic boosters are currently using Houston’s international flavor as the chief selling point in their long-shot bid to win the 2012 Summer Olympics, and I doubt that would have been the case, say, a decade ago.

As for this year’s lineup, it is as strong as ever and includes French Algerian rai star Cheb Mami (best known in America for his role in Sting’s “Desert Rose”), gypsy-swing guitarist Biréli Lagrène, and Parisian salsa king Sergent Garcia. French-speaking Louisiana is represented by Beausoleil and Nathan and the Zydeco Chas Chas, to name just two; Austin pianist Marcia Ball and Mardi Gras Indian tribe the Wild Magnolias top a salute to New Orleans. The festival also includes world artists such as eclectic Senegalese drummer-singer Cheikh Lô; swinging, socially conscious Zimbabwean singer-guitarist Oliver Mtukudzi; and Colombian cumbia queen Toto la Momposina. The Lone Star State is represented by bluesmen like Gatemouth Brown, roots-rock and alt-country acts like Alejandro Escovedo, and Tex-Mex stars like Emilio and Eva Ybarra. And in a particularly inspired move, western swing musicians from Asleep at the Wheel, Tom Morrell’s Time Warp Tophands, and the Texas Playboys will offer a tribute to French jazz legends Django Reinhardt and Stéphane Grappelli that ends with a jam featuring the storied French gypsy band Latcho Drom. (The complete program is posted at ifest.org.)

All this adds up to an inexpensive, family-oriented festival that can sell itself purely on its reputation for reliability rather than on the basis of what stars it presents. You go knowing that you’re going to hear something new and great without knowing exactly what it will be; audiences are participants at the HIF instead of mere consumers of the musical flavor of the month. It all reminds me of nothing so much as the pacific early years of the New Orleans Jazz and Heritage Festival, before it became the flavor of the month. I think back to one night last year and the closing set by Femi Kuti and Positive Force, a more tightly wound update of the funkish Afrobeat pioneered by Femi’s father, Fela Anikulapo-Kuti, who is revered as a martyr in Nigeria. The kaleidoscopic seventeen-piece troupe lit up the night with a relentless, steamy riot of screaming saxophones, razor-blade guitars, and swirling dancers. But the crowd dancing below the stage with equal parts precision and abandon was almost as dazzling—and just as much fun to watch. Houston never looked better.