We’re happy y’all are here tonight,” Andrew Brown said, standing in front of a crowd one night last January in a converted East Austin warehouse. He then introduced an electronic show, called Exploded Drawing, by describing what it would not be. “So for those that don’t know, the thing that makes this electronic music event different from the other ones you’ve been to: other than the records that are being played right here, every artist is performing his own material. Like, there are no DJ sets going on.”

For the few hundred attendees of the show, one of about six held every year in various locations around East Austin, this was not a revelation. They knew the difference between a DJ set, in which a person spins records, and a live electronic performance, in which a producer employs drum machines, keyboards, and other tools. Still, Brown, as co-founder of the series, is a bit of an evangelist for his genre; he wanted the fundamentals established.

Brown wrapped up his intro by inviting people to approach the performance area (“This isn’t a movie theater”), and the first of six scheduled producers—a long-haired, tattooed twentysomething named YIMSOCK—made his way to a table covered in Mexican tapestries, where samplers and other equipment sat bathed, for the moment, in a kaleidoscopic video projection of city bus images. Then, as people began yipping, Brown yielded the floor. “All right, here we go.”

While YIMSOCK began his performance, Exploded Drawing’s other co-founder, Ben Webster, stood nearby and surveyed the room. “When we first started out, we didn’t know there were so many people into this,” he said. After all, Austin’s reputation for music is based largely on singer-songwriters and other guitar-centric acts. At the founders’ first meeting, in Austin in 2010, 40-year-old Webster (his producer name is Butcher Bear) and 32-year-old Brown (stage name: soundfounder) discussed Los Angeles’s Low End Theory electronic shows, which focus on the music as opposed to the ravelike dancing that usually accompanies the electronic genre. They decided to curate a show just for music nerds.

But they wanted to be careful about their approach. “We decided we weren’t going to become a hype factory,” Webster said. To exhibit the purity of their intentions, they chose to allow all ages and charge only $5. They consciously avoided downtown venues. (The January event was held in the Austin School of Film warehouse space.) Instead of using social media to spread the word, they invited people through an email list, a strategy that allowed them to better connect with true fans of the music.

So far, it had worked. At the January performance, few were talking, save for those pestered with a reporter’s questions. “I’m here to see Deantoni Parks,” said one man, about 25 years old, referring to the former drummer from the Mars Volta, who now plays solo electronic shows. He said Parks had a unique playing style, which he described as a “stripped-down kit with a mini synth that he plays at the same time.”

Since Exploded Drawing’s first show, the electronic music scene has grown, with Webster and Brown—not surprisingly—at the center of it. One audience member explained that the trinity of Austin’s experimental electronic scene is Exploded Drawing, a label called Insect Records (run by Webster), and a store named Exploded Records (run by Brown). But unlike some scenes in town, this one has no type of person attracted to it. “Austin is full of people trying to be seen, but everyone here is legitimately interested,” said artist Michael Scheel, who creates the event’s posters and shirts. “You can’t pigeonhole the people who come to this.” 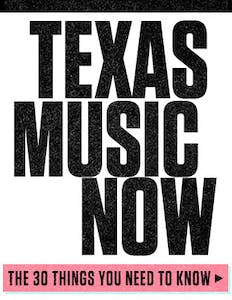 With one exception: everyone that night seemed to be a performer of some kind. There were light artists, band members, and beatmakers in that mix of young women wearing hot pants, boas, and sailor dresses, those men sporting berets and long skirts. After YIMSOCK finished a set of experimental hip-hop, he wandered through the crowd, stopping to explain his method to me. “I try to blend the tracks,” he shouted over the following act. “I start off slow and gradually get faster. Exploded Drawing set times are only twenty minutes, so the idea is to tell a story in a short amount of time.” One of the artists who’d performed at previous Exploded Drawing shows, a tall producer in glasses and a baseball cap who goes by the name Chief and TheDoomsdayDevice, explained the attraction for the artists. “What’s fun about performing here is you have a built-in audience that will give loaded but honest feedback. If you tend to have a repetitive sound, they’ll ask for variety without saying, ‘It’s boring.’ If it’s high pitch, they’ll say, ‘It’s a little aggressive.’ So they say it without cutting you down.”

Around midnight, when Deantoni Parks finally took his turn, the crowd swarmed around his drum set, even packing the space behind the PAs and the main performance area. Brown and Webster didn’t seem bothered by the configuration; on the contrary, they too were craning their necks to get a view. And even after police officers came and checked out a noise complaint (ultimately not taking further action), much of the crowd stayed until the last act, Daed, wrapped up at around 1:10 in the morning, giving one final blitz on the sequencer. There was silence when he finished, then a man in the back of the room held his hands high in the air and shouted, “That is how you do it!”