One of the joys of 2019 has been watching Megan Thee Stallion blow up from an “up-and-comer to watch” into a true superstar in the making. One of the milestones in the story of her ascendancy—a scene that would undoubtedly make it into the trailer in the movie of her life—is her first appearance on late-night television, which happened this week on Jimmy Kimmel Live. During the set, the rapper reps Texas with a rhinestone-studded cowgirl hat, a top emblazoned with the word “Houston” on it, and backing dancers in cropped Rockets jerseys. And, most importantly, she carries the rich Houston hip-hop tradition of absolutely killing it on the mic by tearing through her new single, “Realer,” and transforming it into a medley with her breakthrough hit, “Big Ole Freak.” It’s Megan’s moment, and watching her seize it—on late-night television, no less—as she continues studying at Texas Southern University (in pursuit of a degree in health administration!) is one of the more inspiring things I’ve seen this year, and it’s worth marking every major step in her journey.

Born in Haiti, but now based in both Austin and New York City, Paola Mathé assembles striking looks, often accompanied by the equally bright and chic headwraps she designs as the creative director and founder of her company Fanm Djanm. Her feed will satisfy your wanderlust and give you a glimpse of what it’s like to be in New York City during fashion week or in the French countryside during the summer. But more than that, Mathé’s posts go beyond travel and fashion—her captions and stories often serve as lessons she’s learned about self-confidence, beauty, and diversity over the years. Whether she’s in a bathrobe or a gorgeous lilac ruffled dress, Mathé encourages her followers to live boldly, authentically, and to share their colors with the world. 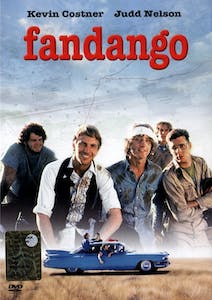 The Fireworks Scene in Fandango

A recent conversation with a friend about the Fourth of July inevitably led to us reminiscing on shooting bottle rockets and the topic of fireworks. My friend brought up the movie Fandango (1985), and he must have been able to tell that I had no idea what he was talking about. “You’ve never seen Fandango? Oh, you’re required to do so immediately.” So that night, I sat down and was introduced to Dom, the Groovers, and that perfect fireworks scene.

Set in West Texas, the film follows five friends on a road trip after graduating UT in 1971. Along the way, they confront the future: marriage, the Vietnam War, and what kind of people they will become. It’s the fireworks scene that encompasses what’s so lasting about this movie. While firing rockets, the graduates run carefree through a Marfa cemetery when they trip over a freshly-dug grave. It belongs to someone their age who had gone off to Vietnam. And in that moment, while the rest of their friends are running around, Kevin Costner and Sam Robards’s characters both realize their youth has ended. The draft notices in their pockets actually mean something. It’s as effective a scene as you’ll find in a coming of age story. So if you’ve never seen Fandango: Oh, you’re required to do so immediately. 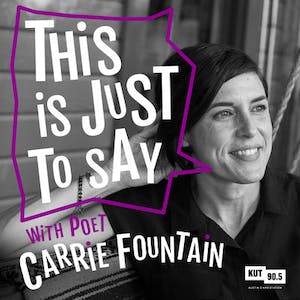 This is Just to Say with Poet Carrie Fountain

The realm of contemporary poetry may seem intimidating or mysterious to most, but poet Carrie Fountain has found a way to make it more accessible. The 2019 Texas Poet Laureate started podcast and radio show This is Just to Say to simply expose people to more poetry in a way that’s relatable and enjoyable. One of my favorite episodes to date was her conversation with José Olivarez in which they discuss the intricacies of identity, and the ways Olivarez shares his personal connection to his cultural identity without being a “tour guide” of Mexican culture. He also talks about how he came to writing poetry and his family’s influence on his work—especially coupled with the poem he opens with, “Mexican American Disambiguation,” you’re left with a greater sense of the importance his words hold today. Most of the episodes are similar to Olivarez’s—Fountain speaks to a number of contemporary poets about the processes, experiences, and themes layered within their own works. Give it a listen–whether you’re a fan of poetry or just needing a new podcast, Fountain’s enthusiasm for the craft is contagious and endearing.