In the U.S. we associate pastrami with beef. Whether it’s the more traditional beef navel (a.k.a. beef plate or beef belly), brisket, or even beef short ribs (as discussed yesterday), the word pastrami evokes beefiness. That wasn’t always the case. If you reach back deep into the history of pastrami—and even further back to Turkish and Romanian basturma—it was all about the fowl. In his book about pastrami and the delicatessen, Save the Deli, David Sax writes “Jews who lived in Romania and Bessarabia adapted the food to kosher norms, most often spicing and smoking duck or geese.” It wasn’t until we imported pastrami into the States that beef became its main form.

Lately some experimentation has been taking place on the pastrami front. We haven’t gone to curing camel humps, a North African tradition Sax describes in his book, but octopus is on our spectrum of uncommon pastrami options. Some have also taken to serving it in ways far different than between two slices of rye with mustard. In New York you can find pastrami tacos, and also pluck out cubes of the stuff from a much heralded dish of Kung Pao. Those and a few others are highlighted below from my travels across the country in search of great pastrami. 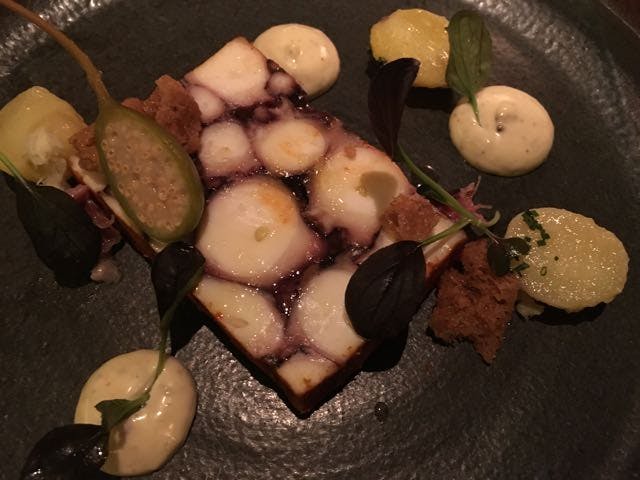 It’s the least like pastrami of any dish on this list. Actor Rainn Wilson is a fan, as he announced in an interview with Conan O’Brien, but if the descriptor was left off of the menu, few would associate this octopus terrine with pastrami. It gets its flavor from pastrami-like spices along the thin edges, but I didn’t get any smoke flavor. I might have to chalk that up to pastrami fatigue since this was the fourth pastrami stop of the day. Still, you’re left with nicely cooked octopus beautifully arranged with lively elements like a giant caper berry and crunchy croutons. 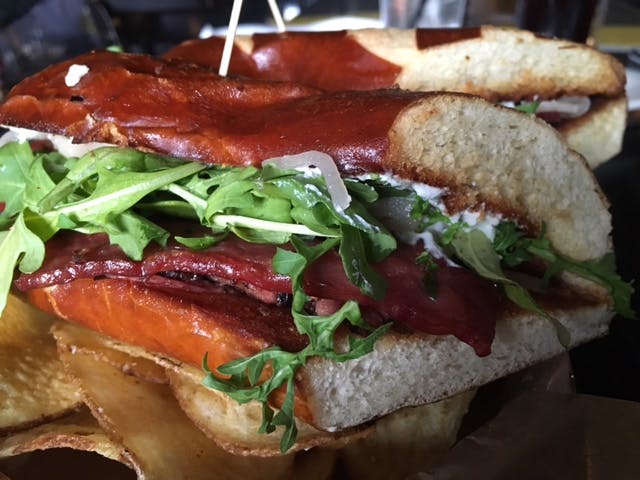 In a nod back to pastrami’s fowl origins, Chef Oliver Sitrin cures and smokes duck breast for this unique sandwich that also features duck bacon. The duck pastrami is sliced thin and is so tender is almost melts on the tongue. 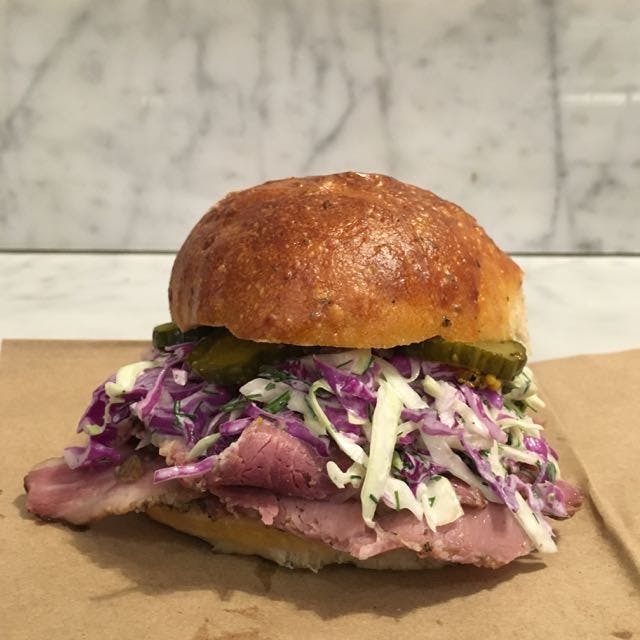 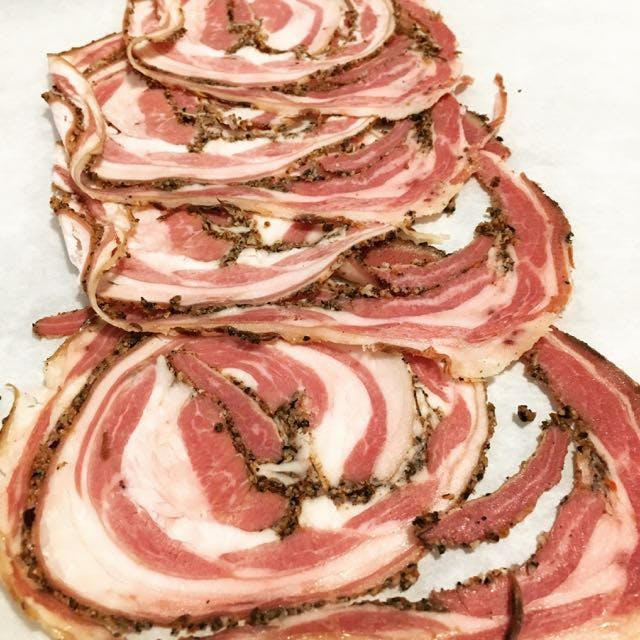 Dickson’s is a butcher shop and sandwich counter in Chelsea Market that features a very nice beef belly pastrami case, but they also have pork and lamb varieties. The pork pastrami is made from briskets off of 400-pound hogs. It comes on a great roll with a dill-heavy slaw and pickles. Two lamb bellies are rolled together for the lamb pastrami. It only comes cold out of the case, but I couldn’t stop eating the paper thin slices. It was like a mix between prosciutto and a particularly assertive lardo. 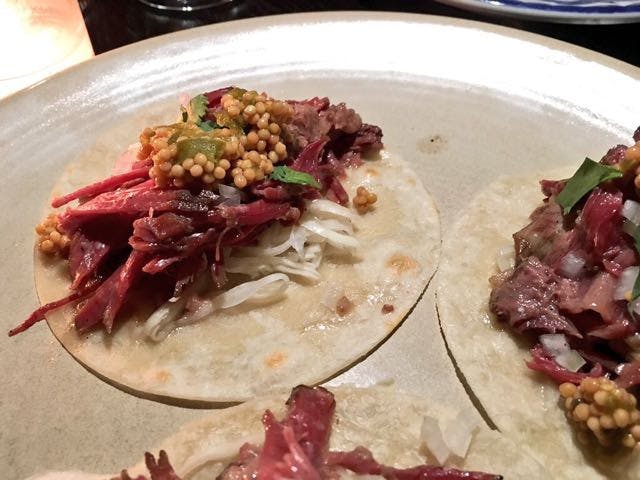 Shortrib pastrami is shredded for these excellent tacos. Pickled cabbage provides the crunch, and I loved the pop of mustard seeds, which offered an acidic tang. It was the perfect counterpoint to the lusciously fatty beef. 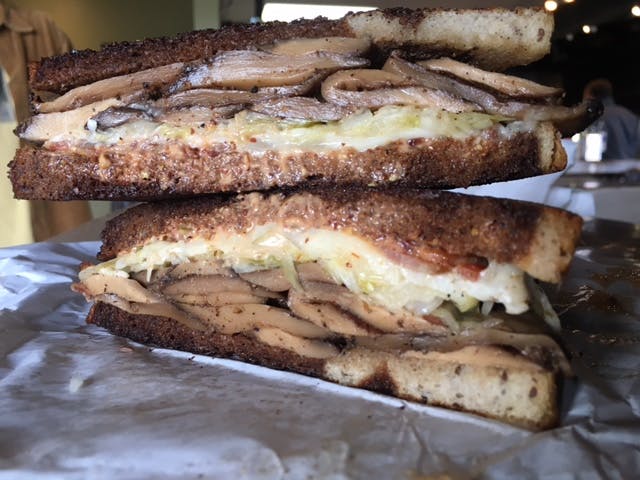 We covered this one earlier in the week, but it’s easily the most compelling vegetarian pastrami out there. The mushrooms taste meaty and take on the smoke so well. As great as they were on this modified Reuben, I still had to add a couple slices of bacon. 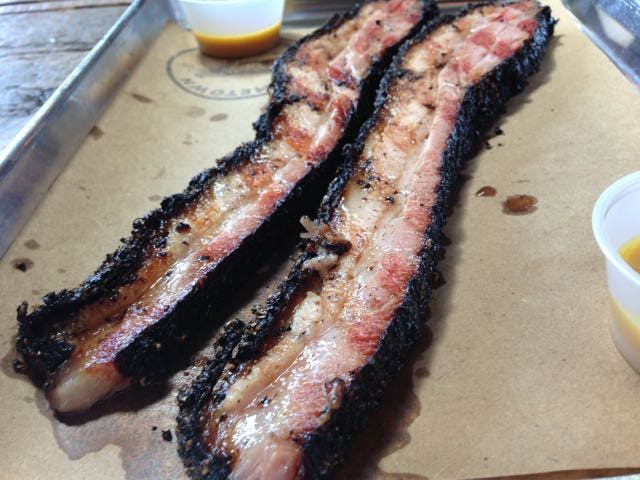 These pork bellies are cured and smoked hot, making them a few degrees removed form bacon. Instead of being kept warm in a steamer, the bellies are chilled, sliced thick, and grilled to order. With the peppery rub and the char, they’re something between bacon and a fine Texas pork steak. 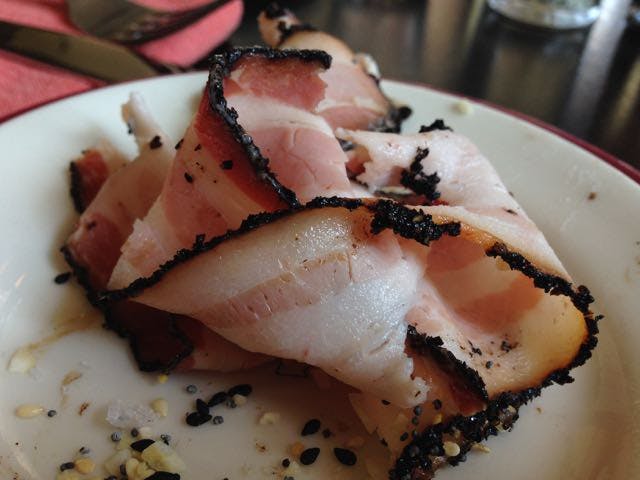 They no longer serve the belly at Speedy Romeo in Brooklyn, but it was treated even more simply when they had some in-house for a seasonal pizza. Chef Justin Bazdarich served me a few cold ribbons of the sliced pork belly pastrami with a sprinkling of everything-bagel seasoning. It was as elegant and more profoundly delicious than most any charcuterie I can remember. 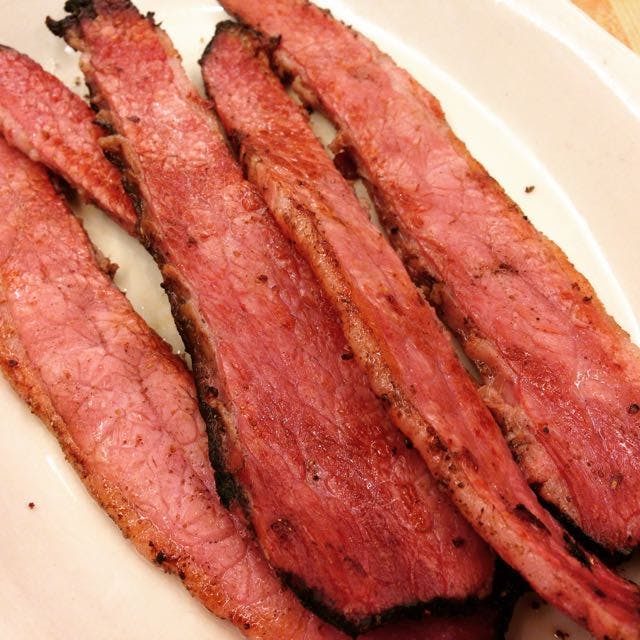 When pork isn’t an option in your diet, a bacon craving is still natural. At Kenny & Ziggy’s Deli in Houston they try to quench it with pastrami bacon. Cured, smoked slices of beef belly make for a good breakfast companion, but requires a lot more jaw work than regular bacon. 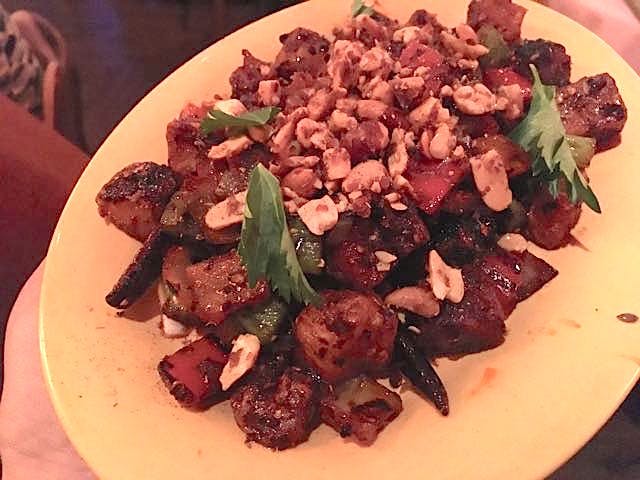 Brisket pastrami is cured and smoked in house, then cubed for the main ingredient in the Kung Pao at the incredibly popular Mission Chinese Food. I’ve eaten it several times because I can’t walk in the place without ordering it. 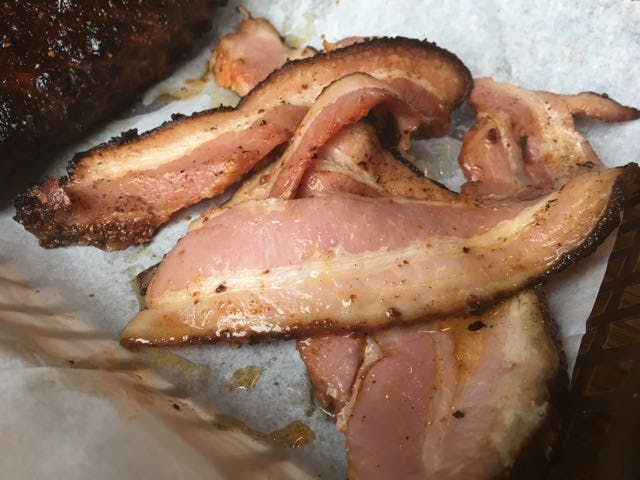 I tried the barbecue at the Pork Shoppe, but it was the pork belly pastrami that drew me here. It’s thin-sliced and fried like bacon, but it’s missing the crispiness of a regular bacon. I loved the flavor and the concept, but it takes some chewing. 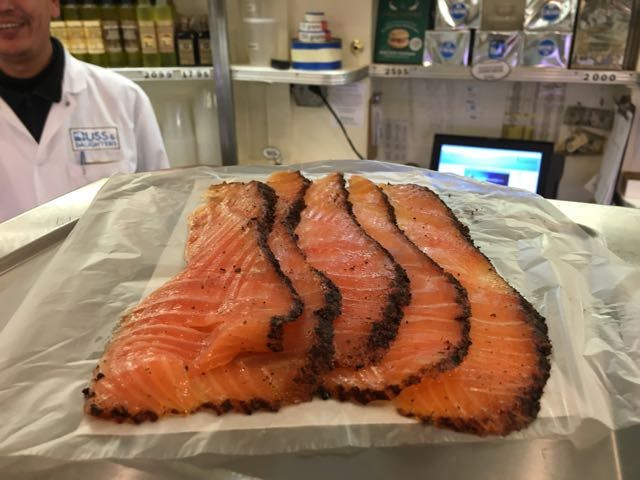 Truthfully, there isn’t much about this salmon that screams pastrami. Some of the city’s best smoked salmon gets a load of pastrami spices giving it a peppery kick, but it’s hard to compete with the smokiness of Katz’s pastrami down the block. Just grab a few slices to whet your appetite on the way to Katz’s.