I have a confession: I don’t usually like beer with barbecue. Although having a beer while cooking barbecue is one of life’s great pleasures, when I’m chowing down on smoked meats I’d much sooner reach for a Dr Pepper, an iced tea (half sweet, half unsweet), or a cold bottle of Topo Chico. Maybe it comes from a need to stay sober out on the barbecue trail, or perhaps it’s because lots of lunch-focused barbecue joints don’t bother serving beer, but I’ve never found it to be a great mix.

I find the bitterness of hops overpowering between bites. And though gourmands say that a hefty red wine should be paired with fatty beef, I’ve found heartier beers to be in competition with, rather than complementary to, brisket. I’ve even given smoked beer a shot, but the last thing a nice smoky bite of brisket needs is more smoke.

I thought I had exhausted my options, until I recently sipped an old style of German beer while tucking into a smoky beef rib at Hometown Bar-B-Que in Brooklyn. It was crisp, bubbly, and a little acidic—basically, it was everything the beef rib wasn’t. And that’s how I discovered the Berliner Weisse, the only beer I really love with barbecue.

Billy Durney, Hometown’s owner, informed me that this ‘cue-friendly concoction was a Berliner Weiss from the Folksbier brewery in Brooklyn. “It’s the best pairing of barbecue and beer I’ve ever had,” Durney said. I certainly agree. Plus, the seasonal raspberry version resembled a glass of Big Red, which seemed fitting next to the beef rib. When I got back to Texas, I set about searching for Texas versions of this traditional German beer, which, for a beer I was just learning about, was much easier to find than expected.

It turns out that Texas has loved Berliner Weisse about as long as barbecue joints have existed. In the late nineteenth century, breweries in Fort Worth, San Antonio, and Denison advertised the release of their seasonal Berliner Weisse beers. The advertisement below, for Alamo Brewery’s new batch, came out just as summer was heating up on July 1, 1886. In Galveston, the Berliner Weisse from Magnolia Brewing was described as “a spring and summer beverage, and as the name implies, is white and very pretty as well as palatable,” in the Galveston Daily News in 1894.

Over a century ago, Dallas’s most famous beer garden was known for their Berliner Weisse, according to craft beer writer Brian Brown, who, co-authored a regional beer history book, North Texas Beer, with Paul Hightower. The book covers Mayer’s Garden, which had the Dallas’s first electric lights, the first zoo, and Berliner Weiss. I was so confident in the beer’s perfect pairing with barbecue that I asked Brown to join me and a few others for a mostly Texas-brewed Berliner Weisse tasting at Cattleack Barbecue (shoutout to their generous BYOB policy) to see if we could find a smoked meat that didn’t go with Berliner Weisse.

It was a struggle, but pastrami is the answer. None of the beers we tried went with Cattleack’s pastrami beef rib, but everything else was a hit. The tart beers like Live Oak’s (Austin) Berliner Weisse and Blue Owl’s (Austin) Little Boss were the perfect foil for the spice and fat of the house made sausage links. I’ll spare you all the tasting notes, but the hint of sweetness of Raspberry AF from Saint Arnold (Houston) married just as well with the smoked brisket at Cattleack as the first pairing I’d tried in Brooklyn. Another favorite Berliner Weisse came from way outside Texas. Mikkeller’s Ich Bin Berliner Weisse from Denmark, especially the raspberry version, was refreshing and persistently effervescent. After a bite and a sip, our palates were awash with barbecue flavors boosted by all those little bubbles.

Brown noted the recent popularity of this style of beer in Texas—even outside of barbecue pairings. “People’s palates are getting overrun with big beers, and we’re in Texas where it’s a hundred damn degrees,” he told the group as we nodded in agreement around our outdoor picnic table. “That’s why they’re bringing back the saisons, goses, and Berliner Weisse beers, which are lighter, cleaner, more refreshing styles.” They’re also much lower in alcohol. Usually topping out at 3.7 percent, a Berliner Weisse is a session beer that won’t knock you out if you want to try two or three pints.

Master brewer Garett Oliver of Brooklyn Brewery was a fan of Berliner Weisse all the way back in 2003 when he wrote The Brewmaster’s Table, a book about pairing beer and food. According to Oliver, Napoleon called the beer the “champagne of the north,” because of how light and bubbly it was. In the book, however, he felt the beer had limited successful food pairings, but I should also note that he doesn’t really cover any pairing possibilities with smoked brisket and ribs. Oliver does mention his favorite Berliner Weisse called the Fritz Briem 1809. I couldn’t find it in Dallas, but a Berliner Weisse tasting in Austin’s WhichCraft beer store included it in their line-up, so I headed south for another round of sampling.

Matt and Virginia Benavides from The Beer Museum led the tasting, and explained the science of sour beers like Berliner Weisse. Yeast, which eats sugar and converts it to alcohol, is added to all beers during brewing. But with a Berliner Weisse, a bacteria called lactobacillus is added to the mix. It also eats sugar, but converts it into lactic acid. The lactic acid gives the beer its tart flavor, which Matt described as a “clean sour” versus the barnyard flavor that some wild sour beers are known for. In other words, it’s a sour beer for people who don’t like sour beers.

Aaron and Stacy Franklin of Franklin Barbecue, who are big fans of sour beers, also attended the tasting.”It’s like a beer version of lemonade,” Aaron told me, adding that he also thinks its a great beer for pairing with barbecue. Jester King, an Austin brewery known for wild sours, collaborates with the Franklins on Figlet, a beer made with figs smoked at Franklin Barbecue.

The following day, our curiosities piqued, Aaron and I tried a few local Berliner Weisse beers with brisket and sausage at Franklin. Both went down beautifully with Einhorn from Austin Beerworks and Live Oak’s Berliner Weisse. We even had a sample of Lichtenhainer, a smoked Berliner Weisse from Live Oak Brewery. It’s available only on draft around Austin, and despite not finding a hint of smoke in it, we preferred it to the original. Most importantly, I’d found two more Texas-brewed Berliner Weisse beers to enjoy with Texas barbecue.* 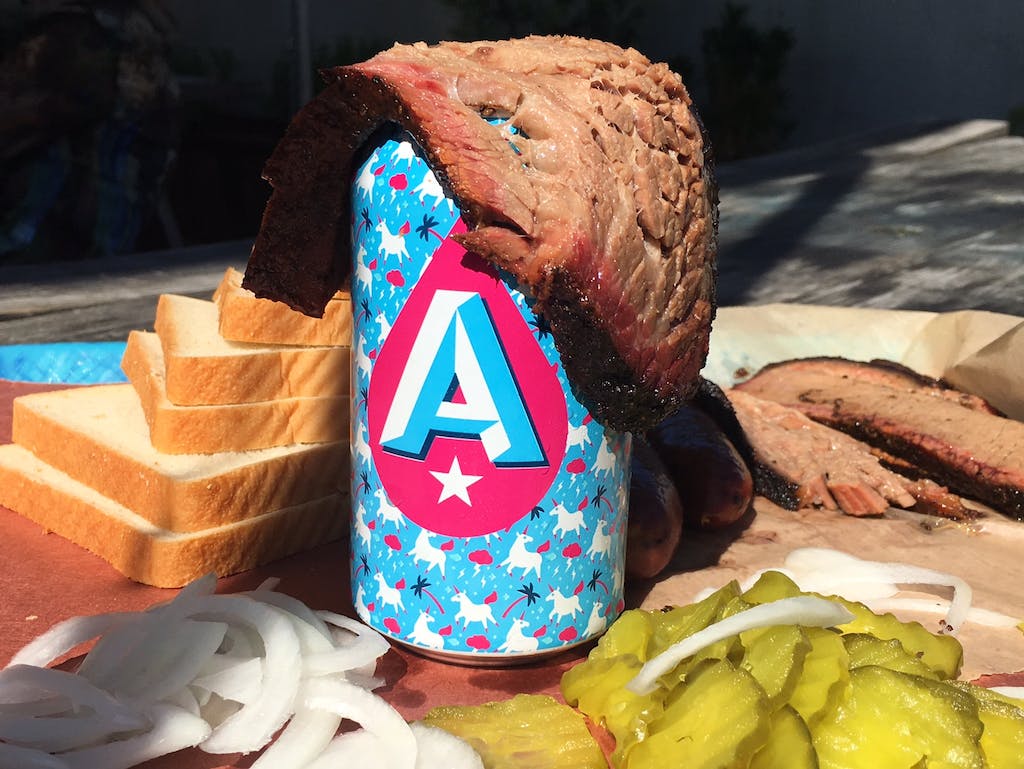 I drank more varieties of Berliner Weisse in a week than I’d even heard of in my life. Most importantly, nearly all of them paired spectacularly well with every bite of barbecue I ate alongside them (pastrami beef ribs excluded). Here’s a list of some to keep your eye out for if you’d like to double check my finding that Berliner Weisse is barbecue’s best beer buddy.

Braindead Brewing (Dallas) – Der Storch (available on draft only at the brewery. Pairs well with their brisket/bacon cheeseburger.)

Folksbier (Brooklyn) – Raspberry Glow Up (available only in New York)

*Freetail Brewing in San Antonio, Bare Arms Brewing in Waco, and Big Bend Brewing in Alpine also brew a Berliner weisse, but I wasn’t able to try their versions before publishing.