Sisterdale is but a blip on the map halfway between Boerne and Luckenbach. I found it six years ago when I stopped in for an impressive meal at Maywald’s Sisterdale Smokehouse. John and Lori Maywald were running the barbecue business on the weekends in between their day jobs. I still remember the ribs and that juicy chicken thigh, but I never made it back. Even every other weekend became too much, and they closed the place in 2015.

Jake Gandolfo moved to town to take the chef position at SisterCreek Ranch. The Connecticut native had cooked in Chicago and Santa Cruz, California, and he was also a contestant on MasterChef on Fox. He fell in love with Maywald’s brisket burnt ends, and like the rest of the town, was sad to see the joint close. Memories were stoked when, together, they formed the Sisterdale Shindig Society and reopened the smokehouse for a one-day pop-up in 2016 and then again early last year. During the dinner, Gandolfo announced that he and his partner, Jo Irizarry, were reopening the barbecue joint. “The roof lifted six inches off the joists,” Gandolfo told me. The crowd was ecstatic, and Black Board Bar-B-Q was born.

They opened the doors six months ago with more generous hours than Maywald’s. Lunch and dinner are available Thursday through Sunday, and the menu has a lot more than barbecue. Fried catfish is the standing Thursday night special. Gandolfo filets them himself. Thankfully, there were a few orders left on Friday. The cornmeal batter was crisp and nicely salted, and the house-made tartar sauce showed a chef’s touch. The catfish was served alongside some good, crunchy slaw flecked with black sesame seeds, and fresh cut but limp fries. Luckenbach lollipops made good use of the fryer. Quail halves were deboned except for the leg, which became the stick in the meaty, breaded lollipops. I was here for barbecue, but these screamed for attention.

Gandolfo didn’t have any barbecue joint experience when he took over, but he’s been grilling from a young age. “I kicked my old man off the grill when I was 11 years old,” he said with a laugh, remembering too many dinners of burnt meat prior to his intervention. He’s using Maywald’s old Oyler rotisserie, which John Maywald showed him how to use properly. The tutelage paid off in the brisket department, where Gandolfo’s tender, smoky beef was impressive. Even the lean portions were moist. For a little more ($20/lb) you can get just the juicy burnt ends. These aren’t KC style, which are rubbed or glazed and then smoked some more after being cut. These are Texas burnt ends, meaning chunks of the best fatty brisket bites are harvested and served all by themselves.

The ribs need some work. They’re beyond the tenderness I prefer, and the overly smoky flavor was off-putting. Maybe it’s from a rub that’s too heavy applied, or maybe it was just an off day. Everything else was nicely smoked, including the huge chicken quarter and a link of jalapeño cheese wild boar sausage. I planned to get a serving of naked pulled pork, but I couldn’t resist the pulled pork grilled cheese with tomato soup. Cheese oozed from between slices of generously buttered bread. The edges of the sandwich were coated in crunchy cheese, while the rest worked like glue to hold the smoky pork in place. It was even better dipped into the roasted tomato soup.

A trio of desserts made by Irizarry were available. I longed for the seasonal fruit cobblers offered during the warmer months, but the apple sticky bun bread pudding was a worthy stand-in. We couldn’t pick a favorite between it and the carrot cake. You can also choose homemade chocolate chip cookies with a glass of milk to finish off the meal.

Gandolfo may have taken a circuitous path to Texas, but barbecue seems to be a good fit for him and Irizarry. It’s great to see them putting out impressive barbecue from Maywald’s old smoker. Sisterdale is already a nice stop along the scenic backroads coming into town from every direction. Black Board Bar-B-Q now makes it a smoked-meat destination. 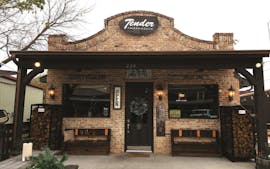 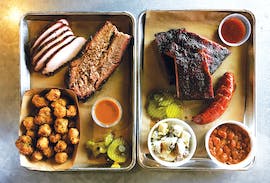 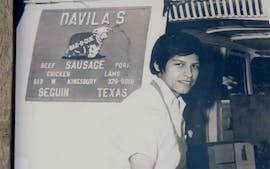