When it comes to barbecue, Dante Ramirez has been around. He recently consulted on barbecue projects in Italy and France. In Texas, he has worked for Red Hot & Blue and directed catering for Bone Daddy’s. But he learned barbecue long before he amassed his lengthy resume. “We were cooking barbecue in the ground when I was a kid in El Paso,” he said during a recent visit to his newly opened Tender Smokehouse in Celina, about 35 miles north of Dallas. It’s in this area that Ramirez plans to hatch a barbecue empire of his own.

“I want to open a few more of these, but all on the outskirts of Dallas/Fort Worth,” Ramirez told me as his restaurant filled up during the lunch rush. He travels the 45 minutes from his home in Grapevine to be here five days a week. The locals are happy to have a great barbecue option and are plenty proud of it too. One diner joked to me, “It’s about time you got up here,” as he walked by. They’re here for a classic barbecue menu without any frills, although Ramirez hopes to eventually add items like smoked pork belly and bologna. Giant beef short ribs are also a recurring special—they just came off the regular menu because many folks balked at the $25-per-bone price tag.

As we stood at the bar, a sandwich of brisket tucked between two thick slices of Texas toast went up in the kitchen window, and I could’t stop staring. Buttered buns are fine but can’t compare to four buttered surfaces of perfectly browned bread per sandwich. They’ve got that grilled margarine scent that you’d find at DQ or Sonic, but the unnaturally yellow bread has a deep buttery flavor too. I haven’t had many sandwiches that were any better than the sliced brisket version I got here. Generously filled with fatty brisket and covered with onions, pickles, and house made barbecue sauce, it was a stunner. Pickles with a little more dill and lot less sugar are the only thing that could have improved it. 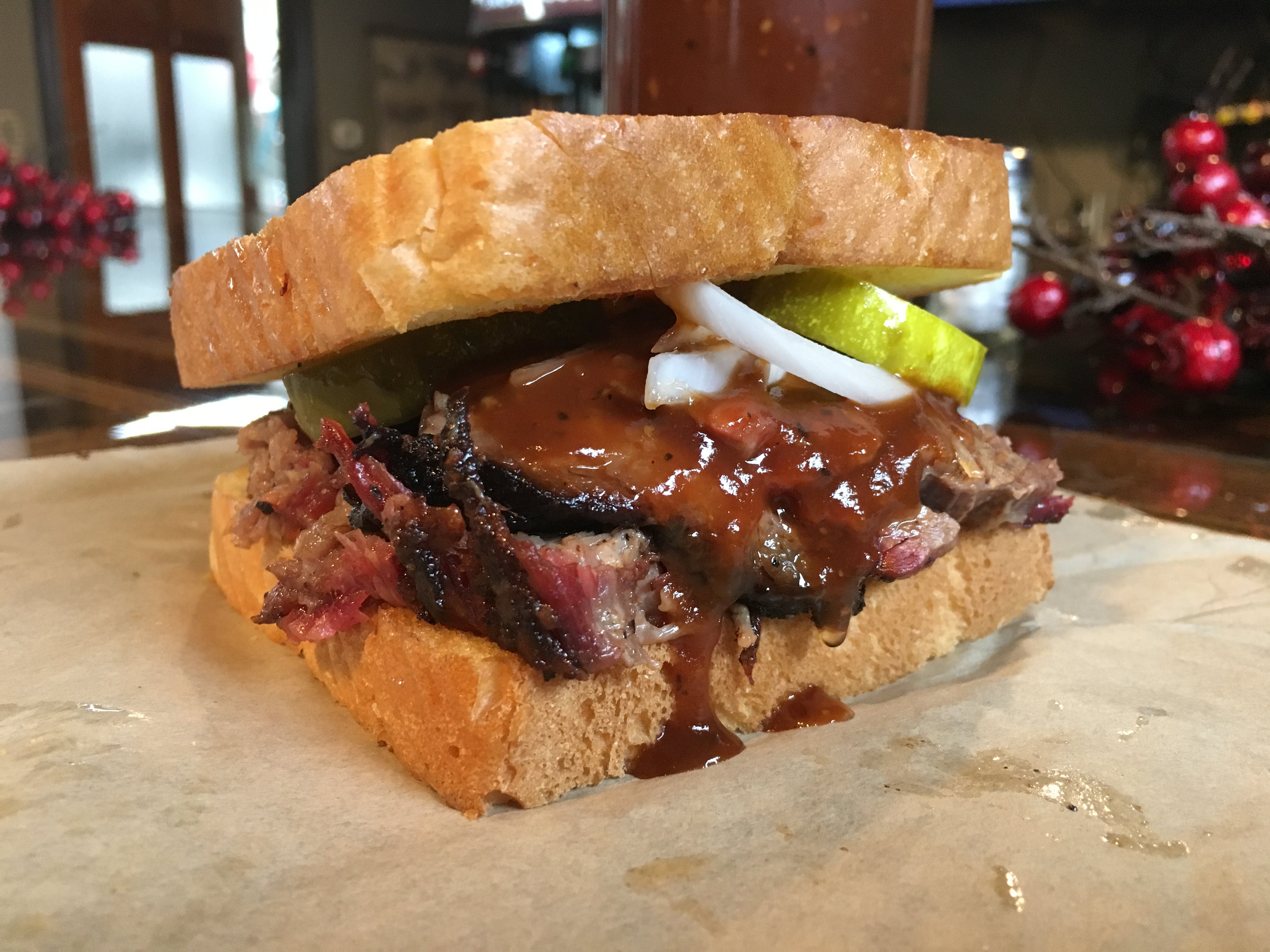 The sauce recipe is a simple one, and good enough for a third-place ribbon at this year’s State Fair of Texas. Chunks of garlic and black pepper are swirled together with a restrained amount of sugar into a base that’s reminiscent of marinara. Ramirez didn’t want to bother with a host of barbecue sauce options, so he made sure this one works with everything. It does, and thankfully so, because the stringy pulled pork was in need of its assistance. The brisket didn’t need a drop. The $20/lb. prime grade beef (locally sourced Wagyu is a weekend-only premium option) is seasoned the night before it goes on the smoker with a four-ingredient rub. The salt gets deep into the meat, so every bite is seasoned. Each slice had great bark and plenty of smoke.

Everything but the ribs is sold by the quarter-pound. Without an option for combo plates, you need to get a half rack of the ribs ($10) for a bite. They’re plenty tender and nicely seasoned, but they need more smoke. Ramirez wraps them in foil just an hour into smoking, and they come out closer to roast pork than smoked ribs. I preferred the smoked turkey breast and the jalapeño cheese sausage, both of which are great on their own or swiped through the sauce.

A side of potato salad had big chunks of red skin potatoes, plenty of eggs, and just the right amount of dressing. The beans have as much meat as legume, and are about as rich as a bowl of chili. Rounding out the trio is crunchy and well executed mayo-dressed slaw with a hint of pineapple. Another fruit option is the banana pudding, with crunchy wafers added on top just before serving.

There’s some room for improvement here, but they’re all easy fixes. This is a solid barbecue stop, especially for brisket lovers. It’s easy to see the appeal for the locals given the lack of good barbecue nearby, and it’s also not a stretch to see it working in the other underserved communities Ramirez plans to target. They’re sure to be impressed with anything Ramirez puts between that Texas toast.