I’ve tried to eat at the original Bodacious Bar-B-Q in Longview for years. The first time I struck out because I didn’t realize they were only open three days a week. The next try they were on vacation, and another time there just wasn’t anyone there. I learned later that after more than five decades of running it Roland Lindsey had fallen ill and closed the place. The closure was temporary, but indefinite. That is, until Lindsey’s son-in-law became available.

Jordan Jackson graduated from Le Cordon Bleu in Austin before moving back to East Texas and marrying the daughter of a famous barbecue man. He didn’t start off in the family business though. Jackson worked alongside Nick Pencis and Jonathan Shaw at Stanley’s Famous Pit Bar-B-Q in Tyler before deciding to move on earlier this year. His dream was to resurrect the empty Bodacious Bar-B-Q that his father-in-law had built in 1968, and when they reopened the doors in June, he got his wish.

Bodacious Bar-B-Q is a chain, but it’s one whose locations are individually owned and operated. Some are better than others, and some are a lot better. A few months back, it was Jordan and Roland who directed me to the Marshall location where Joe Isenhood is doing the best spare ribs in East Texas. There is no set “Bodacious way,” so Jackson wasn’t hindered by protocols and cooking specs when he reopened. He was free to do it his way, as long as he bought that Bodacious barbecue rub. 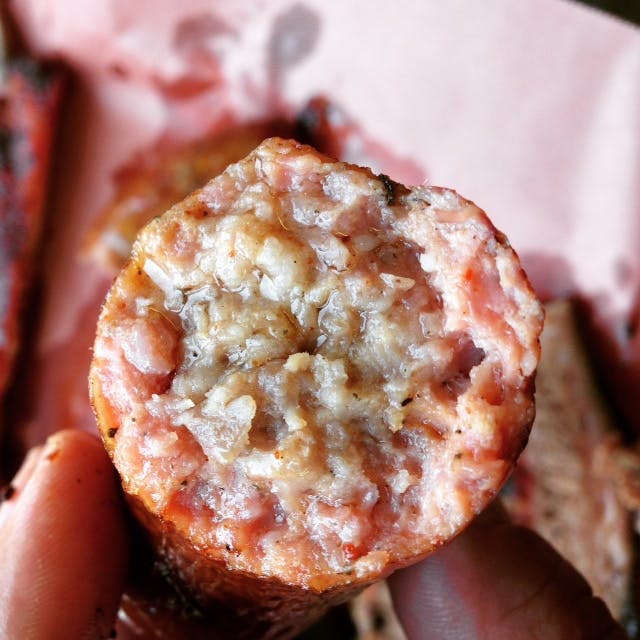 The hours are still limited, and so is the menu. Unlike Stanley’s which serves breakfast lunch and dinner, the original Bodacious had five meats and two sides on the menu last Friday. They were written on sheets of butter paper taped above the counter. The temporary look is on purpose. It let’s you know that things might change your next time in, and the day I visited the change was in my favor. Jackson and Lindsey had worked out a recipe for a homemade link made with brisket trimmings and pork shoulder. It was bursting with juice and smokiness. The herbal notes gave way to a spicy finish. It was a brand new recipe that deserves a spot on the permanent menu, if they ever get one printed up. 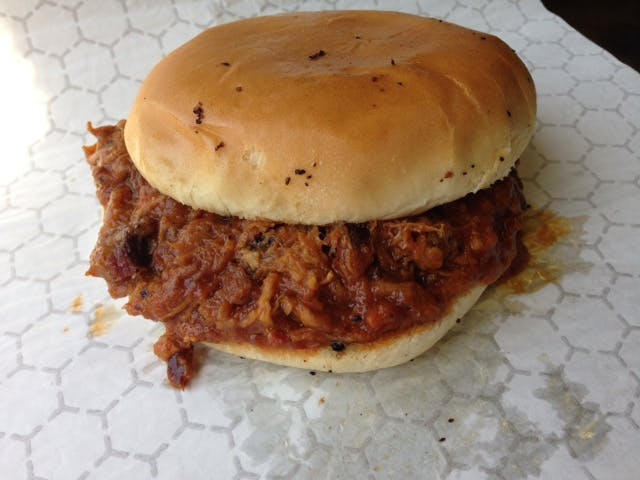 The sides were limited to just the free pinto beans and a good version of potato salad. The sandwiches provide a little more variety. I’ve complained about sloppy joe-style chopped beef sandwiches, where the meat and sauce are pre-mixed and scooped onto a bun, but Jackson does them one better. Yes, you can get a chopped beef sandwich chopped right on the block, but for $3 they have a “Sloppy Joe” on the menu. It’s a white bun filled with a big scoop of beef and pork that is mixed with a generous amount of sauce. The meat is mainly leftovers, which is why it’s cheap. It was like a barbecue guilty pleasure, but also functional. I liked it. 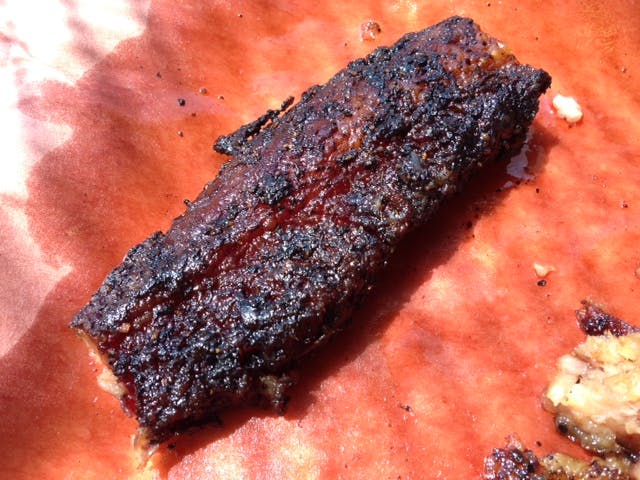 You can get all the refinement you need in the sliced brisket. The lean was as juicy as you could hope for, and the fatty brisket was beefy, smoky decadence. I got a slice of burnt end covered in salt, pepper, and a deep red bark. It was as rich as any pork belly I’ve had, but I kept going back for another bite. The was some incredible brisket. I haven’t had a slice that good in East Texas since the last time I was at Stanley’s. 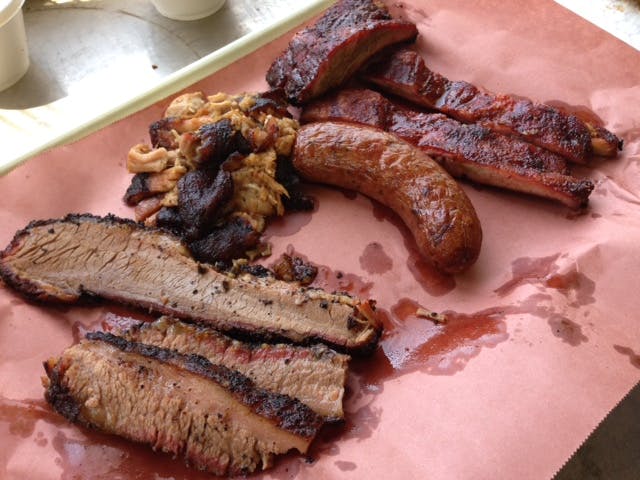 Ribs, both baby back and spares, were on the sweet side. They both had a nice bark, and plenty of good smoke, but I’d go for the baby backs if available. They came away nicely from the bone, while remaining juicy. This is the kind of rib that makes you want to eat whole rack. Jackson admits that he hasn’t gotten spare ribs down quite as well as his Bodacious brethren in Marshall, and he’s right. They’ve got all the flavor you could ask for, but the texture’s not quite there.

When I ordered the pulled pork, Jackson went back to the warming pit (which is wood-fired because he doesn’t like electric warmers) to retrieve a serving, It was then pulled and chopped on the block as I watched on. That’s how you keep pork shoulder juicy, and this one was.

There’s may not be much on the menu, but that also leaves little to complain about. Jackson and Lindsey (who is now in better health) wanted to start slow. They’ve got to gauge their customers’ interests one cut at a time, so don’t expect any big changes. As with the gradual expansion of the menu will come additional hours. They’ve been selling out of a barbecue regularly on this three day a week schedule, but they want to be able to serve the community more often than that. My guess is they’ll be forced to be open a couple more days once the locals figure out how good they’ve got it. The original Bodacious is back, and it’s already one of East Texas’s best barbecue joints.