Do you have a ham brining in the refrigerator? No? Then go back to step one here. (Don’t worry. If you missed step one, there’s still time for a New Year’s ham.) For everyone whose ham is about to complete its salt-water bath, here’s what to do next. 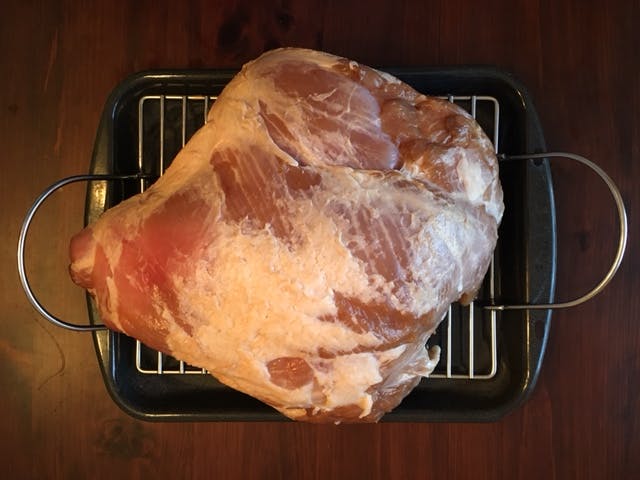 After at least seven full days-a-soaking, take the ham out of the brine and submerge it in fresh water. Rinse it well, then place on a baking sheet with a rack. Air needs to be able to reach all sides as it sits overnight in the refrigerator uncovered. You may read other ham recipes that recommend an overnight bath in fresh water to flush out the extra saltiness. I didn’t bother with that step, and my laziness was rewarded with a well-balanced ham flavor not dominated by salt.

Just a reminder, I’m not an expert at making ham from scratch. This is my first—though surely not my last—and I just thought it would be useful to document the process here for others to follow along with. To that end, what follows is not a precise recipe per se. I might get that confident after five or six hams, but at this point, I’ll go ahead and tell you now that I made a few mistakes along the way—and I want to keep you from repeating them. 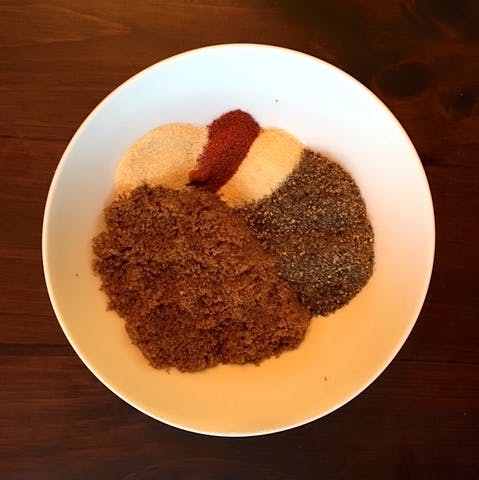 My first mistake was coupling my love of black pepper with my desire to have a beautifully scored surface on the ham. I made a rub (see image above) of (counter-clockwise from the bottom) brown sugar, black pepper, onion powder, paprika, and garlic powder. Remember, the ham is salty enough, so I didn’t add any salt. I rubbed it into the meat after scoring the surface. 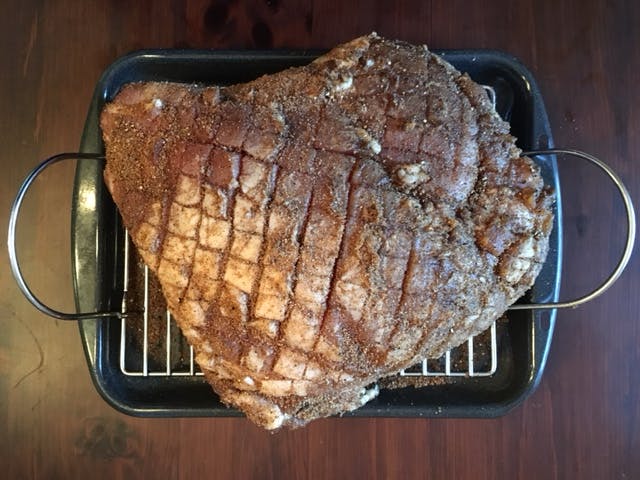 The scoring creates extra surface area for smoke and seasoning to latch onto; however in this case it also left crevasses for black pepper to build up giving it a raw black pepper flavor even after smoking. If you prefer a heavy seasoning on your ham, I’d suggest not scoring it. I was trying my best to replicate the flavors of a fantastic peppery ham I got from John Mueller a few Christmases ago, but I missed the mark. So, the next time I try to smoke a ham, I plan to skip the rub, score the exterior, and season it only with a glaze after it’s nice and smoky. 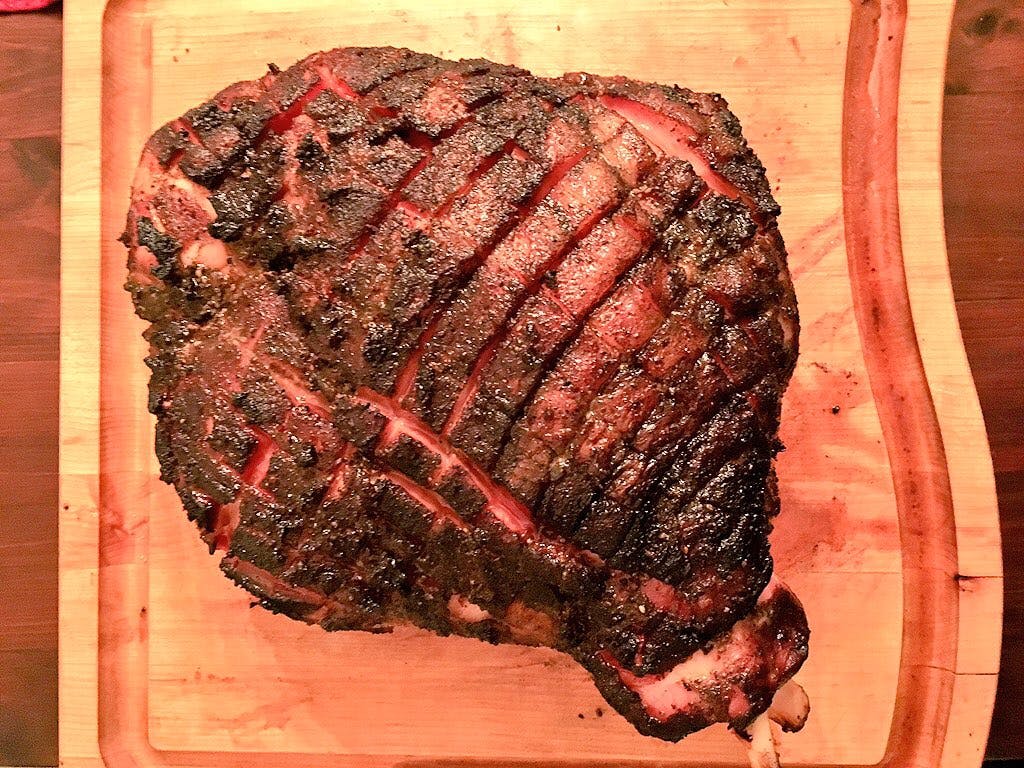 For the glaze on this one, I reduced a can of Dr Pepper by two thirds, then added four ounces each of cane syrup and honey, continuing to heat the mixture until it bubbled and thickened. I stirred in some Worcestershire and a couple spoonfuls of hot German mustard. I saved the glaze application until such time that I decided to move the cooking indoors. (Yes, I cheated.)

After five hours in a 250-degree smoker (I used a mix of oak and pecan), the ham had great color and smokiness, but had only reached 130 degrees internal temperature. I needed that to climb to 160. I brought it inside, placed it in a roasting pan, covered it with glaze, then covered the pan in foil. I placed it in a 350-degree oven where it took three more hours of cooking. For a fifteen-pound ham, that was a lot longer than I’d expected. If I’d left it in the 250-degree smoker, I’m guessing it would have taken about ten hours total. This way, I got it done in eight hours with great smoke flavor, but not as hearty of a bark. 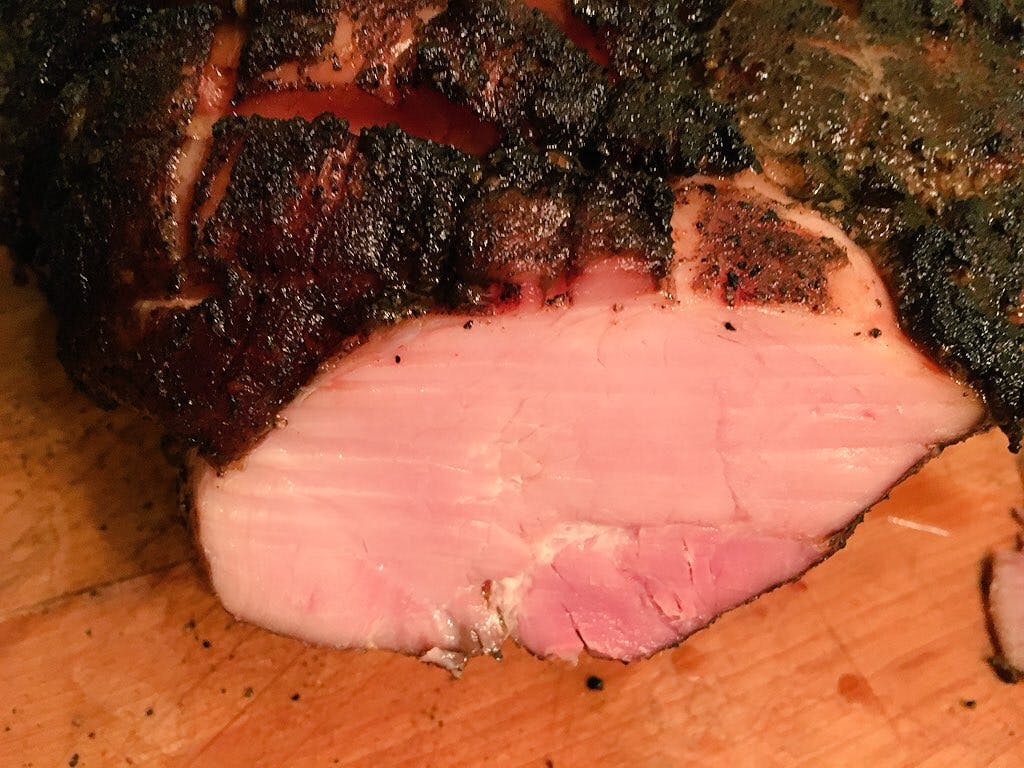 I was as excited to slice into the ham as I’ve been about opening any Christmas present. I didn’t let it rest long, and cut into it to find a good pink color all the way through. Whew. The brine had worked as planned. The flavor was smoky, peppery, and not too salty. Even with the overwhelming pepper, it was still a success. 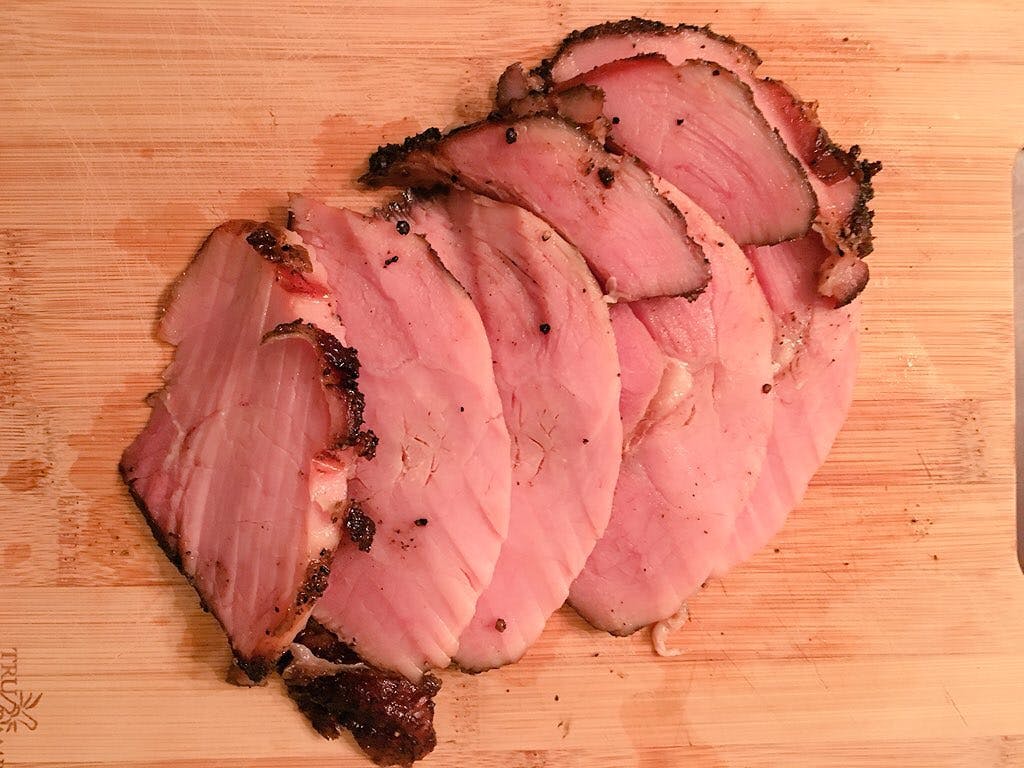 The best bite I took from the ham actually came the next morning. Much like chili and marinara, the ham benefitted immensely from sitting in the refrigerator overnight. I’ve been munching on it for a couple of days now, and I haven’t had the urge to heat it up. The cold slices of ham are just too good on their own.

I’ve had some time to reflect on the real question. After all the time and trouble, was it really better than a store-bought ham? Yes. Yes, it was. It didn’t have a watery texture or the one-note saltiness that can often come along with a ham from the grocery store shelves. It took some effort to brine and smoke, but rather than deter me, it got more curious about what else I should be brining and smoking. No matter what I choose, I’ll be sure to share the recipe.