“The good smell in Evadale” is the tag line painted on a wooden fence beside Chuck’s Bar-B-Q and Burgers which sits about thirty minutes north of Beaumont. Folks say the local paper mill produces a stench, and the smoke from owner Chuck Howard’s pit is sometimes the only relief. I didn’t get a whiff of any pulp, but the “burger” end of the name is what perfumed the dining room just after the lunch hour. Just as many diners come for grilled meat as they do smoked, but it’s hard to argue against either.

A woman with a mesmerizing mushroom cap of teased and sprayed hair took the orders at the counter. Such a perfectly composed hairdo in a barbecue joint is a rare sight, and the breadth of it was accentuated by a visor mounted tightly to her forehead (I’m kicking myself for wimping out on a photo request). Its impressive volume was no doubt tested by the heat from the overworked griddle just behind her. That’s where you’ll find Chuck who prides himself with filling orders quickly. An experienced slicing hand makes getting the barbecue out a breeze, but the burgers require more ingenuity, and a little planning. 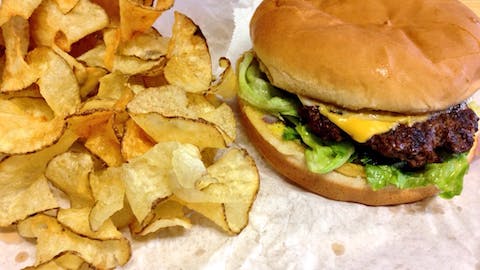 Before the anticipated lunch rush, Chuck grills all of the burgers to the point just before they’re done. Those cooked patties are then stacked into a deep pan and are covered with rendered and smoked fat collected from the briskets. These confit burgers remain submerged until an order comes in and then each patty is smashed aggressively into the surface of the hot griddle. What emerges just two minutes later, still a substantial 1/3 pound patty, has crisped edges and a still-juicy interior. Before Chuck explained this method to me I swore I tasted a hint of smoke in the finely crafted burger which is built on a buttered and grilled bun, with a thick slice of American cheese, and the standard Texas toppings (no mayo). Even the wide, soft bun barely contained the well-proportioned, hand-formed patty. If Whataburger had an Ur-burger which they’d never been able to successfully replicate, this would be it. 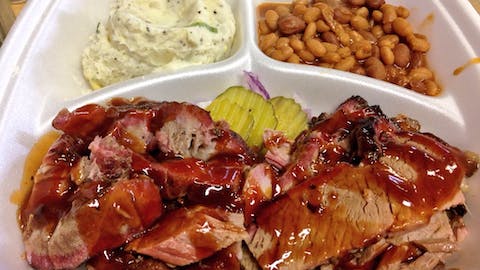 The barbecue wouldn’t hold up so well in a statewide comparison, but it is incredibly good for Southeast Texas. That is not an unqualified slight. I choked down all manner of questionable brisket the day prior, and in a move of self-preservation didn’t even bother with the brisket at the previous stop where it was stored, pre-sliced, in a vat of sauce and had to be fished out with a slotted spoon. No, the brisket at Chuck’s is a whole lot better than the regional norm. I could have done without the drizzled sauce, but a couple slices at the bottom were spared from the thick, sweet concoction. They weren’t dry, or tough, or offensive in any other way, but it was brisket suited better for a sandwich. Strips of pork steak were pleasantly chewy and crisp with good smoke. 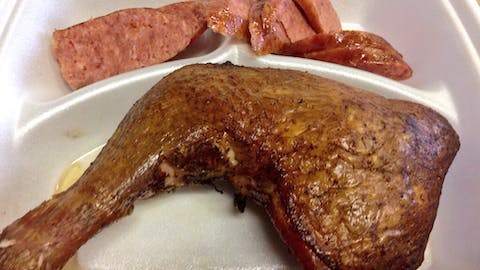 Wednesdays and Fridays are the only day for smoked chicken at Chuck’s, and it’s worth making a plan for. The skin was crisp and smoky, and the meat was juicy, but it could have used more seasoning. Sliced smoked sausage from nearby Jackson Packing was a salty pork link with mild spice. At 1:00pm I was already too late to try the pig on a stick. The previously mentioned pork steaks were made of inch or so thick slices of pork shoulder, while the pig on a stick uses chunks of pork shoulder that are twice as thick. They’re skewered and smoked, and don’t last long.

A scoop of potato salad was served warm. It was a surprising temperature, but the flavor of mashed potatoes mixed with deviled eggs was easy to get used to. Beans were a mix of two varieties and had a good balance of sweet and spice. Twisty taters, which come with the burgers, are thinly sliced fried potatoes. They’re perfect if you can’t decide between fries or potato chips.

Considering the smoked brisket alone, Chuck’s is a refreshing bright spot in the region. The rest of the menu offers enough to make it a good barbecue destination in this secluded corner of Texas, and those confit burgers alone would bring me back.