Two weeks ago I was bathed in hickory smoke in the middle of New York City. For two days the streets surrounding Madison Square Park in Manhattan were taken over by pitmasters who had been invited to cook at the annual Big Apple Barbecue Block Party. Eighteen barbecue joints from around the country had packed up huge mobile rigs and metric tons of raw pork and beef and driven into Manhattan from as far away Driftwood, Texas. They weren’t here for a trophy or an oversized prize check. They had traveled here as barbecue ambassadors, bringing multiple barbecue styles to one location for a grand interstate feast.

For the average New Yorker who had never traveled to Ayden, North Carolina, or Yazoo City, Mississippi, the Big Apple is an crash course in regional barbecue styles, a collection of barbecue traditions that showcases a wide range of preparations and proteins. The vendors were all from a the world of commercial barbecue, and they offered their most prized menu items. Rodney Scott was there with his South Carolina whole hog; Pappy’s from St. Louis offered baby backs; the Salt Lick brought their brisket; and you can probably guess what Baker’s Ribs was cooking from Dallas. The host of the event is Danny Meyer’s Union Square Hospitality Group. Under their banner is Manhattan’s Blue Smoke, which provided salt-and-pepper beef ribs, as well as oyster shooters and lamb bacon BLTs.

The whole event felt like a communion of barbecue family. At one point I was at a picnic table with the group from 17th St. Barbecue, in Illinois. Mike Mills, the patriarch of 17th St. was at the pit with Chris Lilly of Big Bob Gibson’s, in Kansas City. Mike’s daughter, the barbecue author Amy Mills, sat across from me, holding a baby belonging to Samuel Jones of Skylight Inn in Ayden, North Carolina. Our own Wayne Mueller, of Louie Mueller Barbecue in Taylor, Texas, was chatting with Frank Ostini who runs the Hitching Post in Buellton, California. And there I was, in the middle of it all, sharing a beer with Laurie Moran. Laurie is not a pitmaster. In fact, he’s the pastry chef at the famed Le Bernardin, one of the best French restaurants in New York, but here he was, plotting an impromptu barbecue internship with the 17th St. folks for later that night. We were an extended family of barbecue lovers under a single white canvas tent.

When I returned home to Dallas, I had a DVR full of barbecue competition shows like Smoked and BBQ Pitmasters. I’d seen shows like this before, of course, but with the experience of the Big Apple fresh in my mind, they made a different impression. On the line was prize money in the range of $50,000 and championship belts with cartoonish buckles that would make a rodeo champion snicker. This is the world of competition barbecue, or at least a glimpse of that world as portrayed by the media.

Almost a decade ago, the journalist Brett Martin embedded with a competition barbecue team for his funny and illuminating story, “I Was a Texas Rib Ranger.” What he found among the Rib Rangers was camraderie, family, and fun along with a heavy dose of smoked meat and some momentary fits of high drama at turn-in time. I’ve been to these big time competitions as a judge, but never as a hanger-on. Brett Martin’s story makes it sound like a pretty good time, and I’m inclined to believe him. But you would’t know it from watching the amped-up barbecue shows. All those enjoyable moments somehow get lost when the experience is translated into a television.

I know that producers have no choice but to amp up the competitive drama. There’d be no show if cash and prizes weren’t the goal. But it leads to a kind of win-at-all-costs, steroidal mentality from the cooks. As a recent winner on BBQ Pitmasters explained during meat prep, “We’re cooking with science.” He was injecting hydrolized vegetable protein, phosphates, and grape juice into a pork shoulder. Another competitor explained the “flavor profile” that he was trying to build: “You’ve got to put as much flavor and as much punch in that one bite so those judges are going to want to eat it.” The end result is to turn a friendly competition into a Super Bowl of Frankencue. You could make a drinking game out of how often they use the word “product.” I recalled something Joe Nick Patoski said at the Foodways Texas symposium back in March: “It’s meat or it’s barbecue. It’s not product.” In a competition setting where purity of cooking fuel is sanctioned (no gas, no electricity, only wood), it’s ironic to hear judge Myron Mixon say over and over, “You must inject.” It’s a commandment, not a suggestion.

This sort of thing has led some barbecue observers to conclude that the competition circuit represents a threat to our treasured smoked meat traditions. Wright Thompson, writing in Garden & Gun several years ago, described Memphis in May, one of the biggest barbecue competitions in the world, as “a driver of where our barbecue culture will go. [But] here’s what it isn’t: a reflection of where our barbecue has been.” Thompson, who had entered the competition with a gang of friends who shared his devotion to the traditional ways, made his intentions clear from the outset: “We wanted to turn back the clock.” But in response to Thompson’s story, noted barbecue historian Robert Moss waved off the danger, arguing that competition barbecue is “a sort of closed-island evolutionary accelerator that has resulted in a barbecue style that can truly be found only on the grounds of a sanctioned barbecue competition.” Moss’ conclusion–“[Competition barbecue] just doesn’t strike me as something to worry about”–was probably a comfort to some, but I disagree. If you’re talking about teams like the Rib Rangers and the barbecue camraderie they represent, there is little cause for concern. But consider that most barbecue novices these days learn whatever they know about the world of smoked meat from the version of competition barbecue that’s presented by shows like Smoked or BBQ Pitmasters. This programming is teaching people a very specific way to barbecue. Here every rack of spare ribs must be cut down to a St. Louis rib and every spec of beef fat must be removed from a brisket. The child-like palates of judges demand that every rack of ribs be doused with honey, squeezable margarine, and more brown sugar than you’d need for a pecan pie. Plus, the cooking techniques are compromised by time limits, so the injecting of phosphates and beef broth becomes necessary to stop the meat from drying out under the high heat required to make it to turn-in time. The Styrofoam boxes used for turning in the barbecue seem to be the only connection left to traditional barbecue joints, where those same boxes are used for take-out.

But if you’re thinking that all tradition is lost in competition barbecue, then look no further than the Fatback Collective. That’s the gang that Thompson took to Memphis in May. These gentlemen are trying to combat the sameness of competition barbecue by using fatty heritage hogs, but they don’t get as much air time. As Thompson wrote, in comparing other barbecue teams to the Fatback Collective at the 2011 competition, “Amatuers wrestle food into submission, but chefs are more like ushers. Their job is to cook food that stays true to the essence of the ingredients.” Those chefs he was talking about are the members of the Collective with highly decorated pedigrees. That year they came in third with that fatty hog of theirs. The deeper meaning of the trophy according to Thompson was that “the real barbecue we love . . . might be under siege, but it isn’t dead.”

Real barbecue is certainly not dead in Texas, not even close. I don’t know a celebrated pitmaster here that trades technique for phosphates, and the best of the best are noted for their not-so-secret rub recipes of salt and pepper. Real barbecue is also alive and well at convocations like the Big Apple Barbecue Block Party. It shouldn’t be all that surprising that the event serves as a reunion for the Fatback Collective. John T. Edge who helped found the group was there as a spectator. Pitmasters Rodney Scott, Nick Pihakis, Pat Martin, Samuel Jones, Drew Robinson, and Kenny Callaghan were all there repping the Collective as vendors. It’s a select group that sees very little turnover, but I could see the wheels turning in Wayne Mueller’s eyes as we sat under that tent eating baby backs. He was just there as a guest, but agreed that next year’s event needed an injection of Texas beef short ribs. In all fairness I was a bit torn that the best brisket I had was from New York’s Dinosaur Barbecue and that the finest bite I had at the event came from Alabama’s Big Bob Gibson. It was a hunk of money muscle from the hands of the producer of BBQ Pitmasters, John Markus. He was chopping pork for Chris Lilly of Big Bob Gibson’s. The piece I got was moist, smoky, and fatty and was most likely injected with a fruit juice of some kind, but it was offered not for ratings or for prize money. It was offered, to me, a relative stranger, as an early morning communion of fatty pork. And that’s why I’ll be back in Manhattan to eat barbecue next year.

Note: I attended the Big Apple BBQ Block Party as a media member and received free access to the event. I also received food credits for barbecue, but I also ended up spent more of my own money than I’m comfortable divulging. 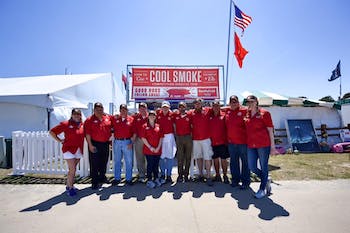 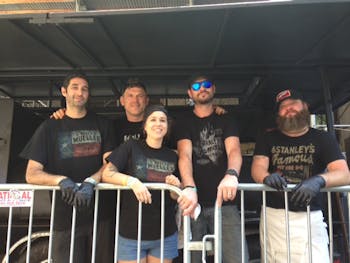 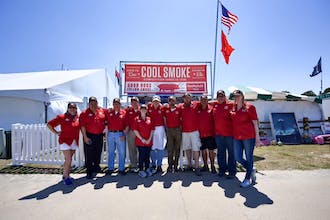 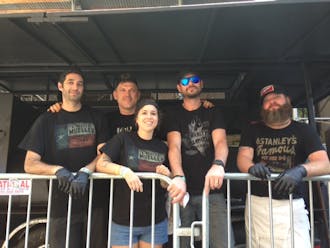