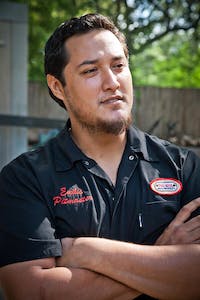 As of yesterday, pitmaster Emilio Soliz is gone from Two Bros. BBQ Market in San Antonio. He broke the news over Facebook and I caught Soliz on the phone.

“I’m nervous, but excited.” He’s planning a new venture in San Antonio which he hopes to have open soon. Right now Sweet Christi’s BBQ (named after his wife) will begin a catering operation with a used reverse-flow pit that Soliz recently purchased.

Why did he leave?: “It’s always been our goal. My wife and I wanted to open our own restaurant.” There wasn’t much drama in the departure.  “Jason [Dady] was a great boss. It was good to work for him. It was just time to go.” Dady echoed that sentiment. “The timing is right for him to move on.”

The Menu: “The sides will have a Mexican splash.” He wants to serve what he was used to eating when he was growing up like Mexican-style rice and barracho beans. For now, he plans to keep the smoked meat options simple – brisket, spare ribs, chicken, and sausage. “There won’t be burgers or anything. Just true smoked barbecue.”

As for Two Bros. BBQ, owner Jason Dady said he is interviewing pitmasters for the open position, and is hoping to hire from within.