It’s just a mile or so off 190, the state highway that runs through Livingston, but Florida’s Kitchen feels like it’s way out in the country. I passed it on my way to visit Hitch-N-Post BBQ, a Texas Monthly top 5o barbecue joint, just another mile down the road. The bright blue building surrounded by large shade trees caught my eye, as did a sign near the front door. “In Texas Monthly Top 40 Best December Issue ’08.” I didn’t remember seeing this name on a past barbecue list, but that’s because this sign referred to our list of the best small town cafes. How our write up in ’08 didn’t mention the barbecue, I’m not sure.

The place is owned and operated by Sylvester and Florida Harris. Before they opened back in 1989, Sylvester visited his grandfather in Oklahoma. He gave Sylvester all of his barbecue recipes which Sylvester uses at the restaurant. He trims and seasons the meat before placing it on the smoker, and his wife Florida keeps an eye on it until it’s done. 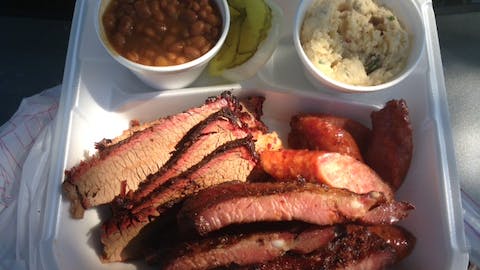 The brisket is a notch above what you might expect to come out of a Southern Pride smoker. The meat is smoky, but it was also moist and tender, which is saying something for a few slices from the brisket flat in the mid-afternoon. The sausage was a commercial variety, but was still flavorful and juicy with a good snap. What I liked best were the spare ribs. Unlike most barbecue joints in Texas where brisket is king, Florida Harris told me that ribs were their best seller. She also dotes on the fried catfish, but I was here for red meat. These ribs had a shiny red exterior. A good bark brought the smoke, and was also delightfully sticky from a sweet rub. The meat came easily from the bone, but had a nice chew. Harris said they don’t cook baby back ribs. “We cook come back ribs.” 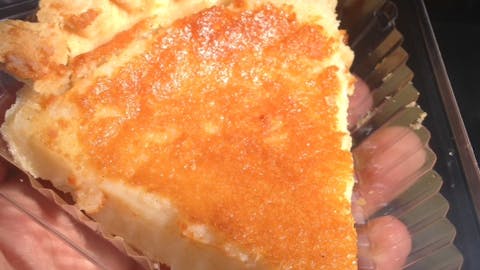 You might also come back for the desserts. A buttermilk pie was sweet with a slight pucker from lemon. It was a generous slice, but hard not to finish. It’ll be hard not to stop at Florida’s Kitchen, maybe even for some catfish, on my next trip to East Texas.