The music was blaring, and my regard for the speed limit was waning. I’d just finished a hearty breakfast of brisket and brisket at Snow’s in Lexington, and I was racing time to get a spot in line at Franklin Barbecue on a Saturday morning. I’d heard from the Twitterverse that lines were still sane one hour before opening at ten, but I hadn’t factored in the start of another semester at UT. Hungry folks had already filled the entry ramp, and the line was slinking down the parking area to a spot beyond the building when I arrived at 10:15. I couldn’t count how many were in front of me, but when Aaron Franklin spotted me in line and came over to chat, he said that I didn’t want to know the truth about when I’d probably eat. A nice girl came through the line asking for orders but only to estimate how long the food would last. At opening time there were probably seventy people behind me. Some of them would get the bad news that the meat wouldn’t hold out that long and had to leave. Just before noon I made it inside the door after watching a few disappointed carloads pull up, only to be met with the infamous “SOLD OUT” sign. They had not been informed of the dedication required to get a taste of this meat made famous all over the country by the likes of the New York Times, the San Francisco Gate and Bon Appétit.

I was meeting a Swedish photographer interested in Texas barbecue, but I’m not sure if he knew what he was in for in regards to the line or the food. The black jeans and boots coupled with the look on his face after the first bite told me “no” on both counts.

Finally at the counter at 12:25, owner and pitmaster Aaron Franklin was a busy man wielding a large knife. I won’t pretend that I was there unnoticed. Aaron and I know each other well after running into one another at various BBQ events and many visits to his old trailer up the road. My friend, on the other hand, was a new face so he suggested we get a taste of everything.

I agreed and made a special request for a thick end cut from the coal-black brisket. A few slices of both fatty and lean brisket were included along with a thick pork rib, a juicy sausage link, and a generous helping of pulled pork. We downed a few fistfuls of the moist pork that is actually pulled from whole shoulders. The meat has a subtle smoke with great seasoning and a splash of vinegar sauce is added just before serving to finish it. Thick pork spare ribs are much more aggressively seasoned with black pepper and smoke. The meat came easily from the bone, and it is incredible moist from all that perfectly rendered fat. The sausage isn’t house made but made especially for Franklin to their owns specifications. The links had great snap, were nicely moist, and had great beefy flavor.

After plowing through the other meat selections, it was time for the highlight of the visit and the best brisket in Texas. As my Swedish friend reached for the brisket slices, I stopped him short so he could taste a chunk of the burnt end first. His eyes had the look of a smoked-meat epiphany, and I too was enjoying a moment across the table. The luscious fat, the thick smoky crust, the black pepper, and the tender beef made for one perfect bite of smoked brisket. The slices, while a bit less potent, were no less incredible and truly worth the wait. As I left I wondered if I would brave that line again. I passed that old trailer now on display and remembered a time where my group sat alone in that old gravel lot enjoying some fine brisket. Hopefully that new behemoth smoker really does cut down on that line. Already garnering the highest rating on this site, I found no reason to cut their score even with the new location. Aaron Franklin, it seems, can do no wrong with a smoker. 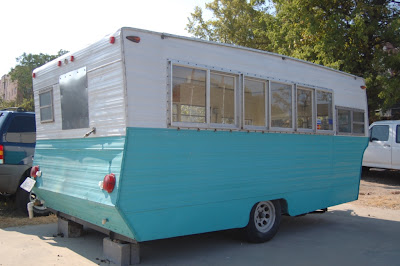