Driving around the south side of Lake Texoma, I was in search of the Shawnee Trail. It’s an old cattle trail that crossed the Red River about five miles west of where Highway 75 crosses it now just north of Denison. The cattle trail followed an even older path called the Preston Road that connected Cedar Springs, Texas (larger than Dallas when the road was built) with Preston, Texas on the Red River. Driving north on the modern-day Preston Road I was thwarted by a dead end at a gated community, so I veered west up the road towards the tip of Preston Bend. Having almost reached the tip of the peninsula I spotted an active smoke stack alongside the road. “Hannah’s BBQ” was painted on the side of the trailer that housed the smoker. I pulled in. 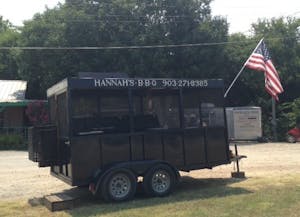 Another trailer where orders were taken and fulfilled was parked back in the shade. A small crew bustled about inside. One stopped to open the window and greeted me with a smile and a notepad. A few minutes later, my combo plate and I were headed to the car.

The box contained the most thoroughly average Texas barbecue meal I’ve had in recent memory. This isn’t an admonition. The cost for this large meal and dessert had barely slipped into double digits. What else could I really expect, and what more could they really deliver for that price? This was a portrait of the middle ground in Texas barbecue. The brisket didn’t shimmer like a thick slice of La Barbecue beef, nor was it too dry. It had been smoked with all wood thankfully, but the fire was putting out some acrid smoke. The meat needed the sauce (which came from a bottle) to cover the smoke a bit rather than provide some additional flavors. The ribs were better than what I’d get at most chain barbecue concepts, but the meat was overcooked and under-seasoned. There was nothing markedly bad about these ribs, but little that was memorable. 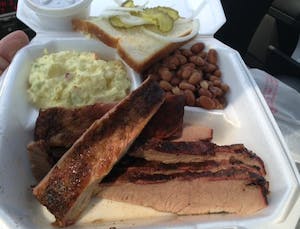 The side might tell the story even more clearly. “It’s all about the meat.” This it what many in the barbecue world preach, myself included. Many barbecue joints don’t need the reminder. The sides across this state are usually fair to poor. Beans straight from a can are considered good enough. In the case of Hannah’s they could have at least added some salt. Homemade potato salad? It’s hard to spend the time on that when the pitmaster is also the prep cook. Both of those duties have an overlapping timeline in the morning. Which one do you think will suffer? Probably not the meat. Besides, there are plenty of pre-made potato salads offered by food service companies or grocery stores and they all taste the same. Small chunks of potatoes, a little red pepper for color, some mayo to bind it and some mustard to brighten it up. This what I got at Hannah’s. You can probably taste it right now. 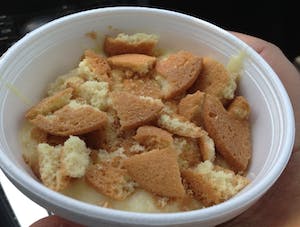 Banana pudding is a favorite of mine, but I’m aware of how easily it can all go wrong in just four words. Banana Flavored Instant Pudding. This is a common mistake that seems logical until you’ve tasted banana flavored instant pudding. It’s terrible. Far less offensive is vanilla flavored pudding from a box which is what Hannah’s uses. It will never match the richness or supple smoothness of a scratch made pudding, but it’s a start.

You’ve no doubt heard food described as “not terrible”. It’s a tongue-in-cheek way of saying a meal or a dish wasn’t offensive, but you’ve had better. Maybe it even beat your low expectations. I go into every barbecue joint (especially one very visibly burning all wood) with high hopes, but it’s meals like this that set my expectations of the average Texas barbecue joint. The effort that doesn’t go into the sides or sauce is saved for the meats, but effort and patience by themselves are not enough to overcome aiming for average. The target for quality is lofty for some, but for most customers and those who tend the pits, shooting straight for the middle is just fine. It’s easier to hit and better than not aiming at all. As for Hannah’s, it wasn’t terrible.