In 1891, the S.S. Utopia departed Italy, headed for America. The ship, carrying 880 passengers, many of them Italian immigrants who boarded the Utopia in Naples or Palermo, was sailing through the port of Gibraltar when it struck another vessel. The hole created by the collision sunk the Utopia in just twenty minutes, and 562 passengers died.

It was a tragedy chronicled by the New York Times, which reported that people aiding in the recovery effort found the passengers, who had been crammed below-deck into the steerage compartment, “wedged into an almost solid mass in their frantic rush to reach the decks.” The ones who made it to the deck didn’t fare much better—all the life rafts were crushed when the ship listed sharply into the water.

The DiMaria family, citrus farmers from the inland town of Poggioreale, in Sicily, avoided this catastrophe. Three years earlier, they had boarded the Utopia heading for the New Orleans, part of a wave of other Italian immigrants leaving their home country, an exodus so large that Poggioreale’s church ceased holding a weekly mass. (The town of Poggioreale was decimated by a 1968 earthquake, and is now in ruins.)

According to the passenger list of the Utopia, the DiMarias arrived in New Orleans on October 17, 1888, after a month-long journey across the Atlantic in the boat’s steerage compartment. Antonino, the patriarch, stayed in one compartment, and his wife, Vita, and their two children, fourteen-year-old Antonino and eleven-year-old Gaspare, were in another. In all, there were nine in the traveling group, carrying a total of six pieces of luggage. They may have even been carrying a box of Sicilian lemons to sell when they landed, as many other passengers did. Along with 796 passengers, the ship also carried oranges, onions, olives, and almonds from Italy to the docks in New Orleans.

Many of the passengers stayed in New Orleans; others moved out of town into the swampy land of Plaquemines Parish to find work on sugar cane farms. That’s where the younger Antonino married Vita Casciola shortly after she arrived in New Orleans, in 1896. They had four sons—Tony, Joe Jr., Gaspare, and Peter—while in Louisiana, but eventually followed Antonino’s parents to Waco, Texas, probably in 1905, where they had three more children.

Antonino’s brother Gaspare took a little longer to make the trek to Texas, though he and his wife, Mary, eventually traveled west, making a stop in Angelina County, where Gaspare worked in a lumber mill in 1910. (Many of the immigrants from Poggioreale settled in Bryan, in fact the largest Italian agricultural community in the South was in Brazos County.) By 1916 Gaspare was in Waco, according to the city directory, working as a bartender.

The two brothers were finally back together, now with the Americanized names Joe (for Antonino) and Jasper (for Gaspare). They lived next door to one another and were almost certainly a consolation to each other through a string of personal tragedies. Joe’s wife, Vita, passed away in 1910. Three years later, while trying to light a fire, their eight-year-old daughter, Vita’s namesake, was killed after a coal oil explosion. Then, Jasper’s wife, Mary, was stricken with tuberculosis, and was forced to live out her final days in a San Antonio hospital.

In Mary’s absence, Jasper put his energy into entrepreneurship. In 1919, he opened his first meat market and grocery at 1219 Elm, where he maybe stocked his shelves with produce from his brother Joe’s farm, although we don’t have any specific records of his crops. At some point, he began smoking meat, a humble start for what would become the longest-running barbecue joint in Waco.

Jasper’s Bar-B-Que still sits at 105 Clifton, where Jasper moved in 1926, leaving his previous location, 1219 Elm, vacant. Tony DiMaria, Joe’s son, left his job on a truck farm and took over his uncle’s old place of business with his wife, Josie. They were now in the grocery and meat market business too, just a few blocks from Jasper’s. This was considered the outskirts of town back then, and most of their neighbors were also of Italian descent.

In the 1934 Waco directory, Gasper (the “G” persists only in these directories) and his second wife, Lena, were listed as working in “barbecue meats,” the first specific mention of barbecue with the DiMaria family name. The same year, Tony and Josie moved their business to 1223 Elm. (You can see them in the doorway in the undated photo at the top). Tony’s Market and Grocery was serving “Hot Bar-B-Q” with a side of Phillip’s pork and beans, all likely cooked in the brick pit to the right of the store in the alley.

The barbecue they were cooking—and that their descendants are still cooking—was unlike what would have been found in Elgin or Lockhart at the same time. In Waco’s Little Italy (my term), the beef forequarter was butchered and simmered in a vat of beef broth. Once it was tender, it was retrieved from the broth and finished in the smoker. That’s still the way they do it at the current Tony DeMaria’s (note the spelling change), which is run by Tony’s grandson Geoff. The brick pit in the smokehouse bears a strong resemblance to the one in the photo above, but it’s a bit bigger. The sauce is still a thin, spicy, red vinegar sauce, and the meat is served with white bread and gravy. I like the “Regular Order,” which includes seven ounces of brisket, bread, and drink for $7.90. Down the street at Jasper’s, $9.25 will get you a “Full Order,” which has an ounce more brisket, though the fixins are about the same. Although Jasper’s Bar-B-Q is still cooking, it’s no longer in the family. Jasper’s son Tony (yes, he had a Tony, too) took it over in 1953 when his father passed away. Tony retired in 1990, and there have been a few owners since then.

There’s a proper method for consuming this style of brisket. Unlike the brisket in Central Texas, with its heavy rub of salt and pepper, this brisket gets its seasoning after serving. Pile some brisket on a slice of white bread, top it with pickles, onions, and hot sauce, then dip it in the gravy—like a French dip sandwich. With the “Waco dip” the whole is greater than the sum of its parts. I’d suggest asking for some of the crustier outside cuts from the brisket. 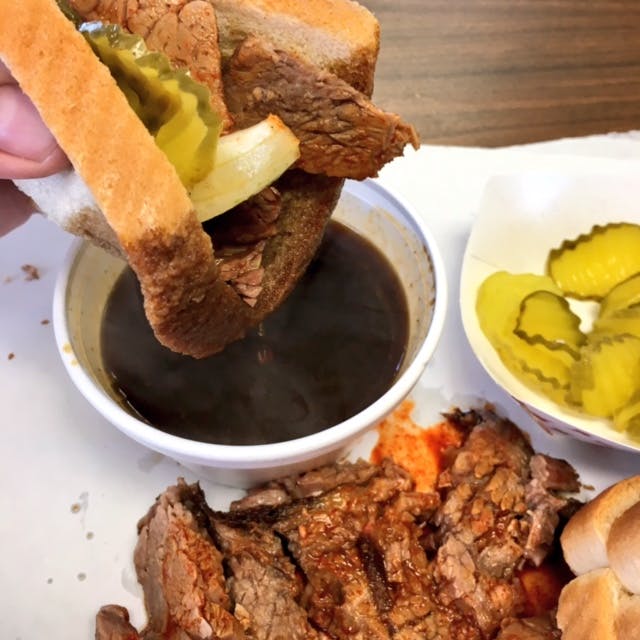 Both Joe’s son Tony and his son, Tony Jr. (I know), went off to WWII. When they returned to Waco, Tony Jr. opened his place in 1946 with his wife, Lillie, at 1317 Elm. It was called Tony DeMaria Jr.’s Food Market, the first official sign that the Sicilian last name had morphed at some point in Texas. Jasper’s side of the family kept the DiMaria spelling, but Tony Sr.’s side used DeMaria. Even the death certificates of Joe and Jasper show the family’s split on the spelling of their father’s name: one certificate has the name of the deceased’s father as Anthony DeMaria; the other brother’s death certificate reads Tony DiMaria as the name of the deceased’s father.

According to Tony Jr.’s son Geoff, Tony DeMaria’s served barbecue from the start at 1317 Elm along with groceries and raw meat. When he was old enough, Geoff would break down the forequarters for the barbecue pit, but he switched to briskets when he took over ownership in 1985. The barbecue was always served to-go until construction on I-35 started bringing in large crews of hungry workers. “The shelves moved out and the tables moved in,” Geoff recalls, but they continued to offer some groceries and fresh meat.

Geoff assumes his dad, Tony Jr., learned barbecue from his father, Tony Sr. Even before Tony Sr. had a storefront, “he used to cook barbecue at the house and serve it out at the auction barn,” Geoff told me. In 1995, Geoff moved to 1000 Elm, the current location of Tony DeMaria’s, got rid of the groceries, added more tables, and still runs the place with his son Blake by his side. They haven’t changed the cooking style. “That’s the way we’ve always done it,” Geoff says.

This Italian strain of Texas barbecue is a strange one. Boiled and smoked meat isn’t as pretty as its Central Texas counterparts, but its just as much part of Texas barbecue history as the shoulder clod at Kreuz Market. The DeMaria’s/DiMaria’s barbecue comes from a Sicilian culinary heritage that had more in common with the legendary Mandina’s in New Orleans—started in 1898 by another immigrant from Palermo—than the German-owned Kreuz Market in Lockhart. Who knows what the dominant style of Texas barbecue would be today if Italians had arrived in Texas at the same rate as the Germans (there were already 40,000 Germans in Texas by the time the DiMaria’s arrived)? For now, though, we can enjoy their unique contribution in its unaltered form as a sort of barbecue artifact found only on the north side of Waco.