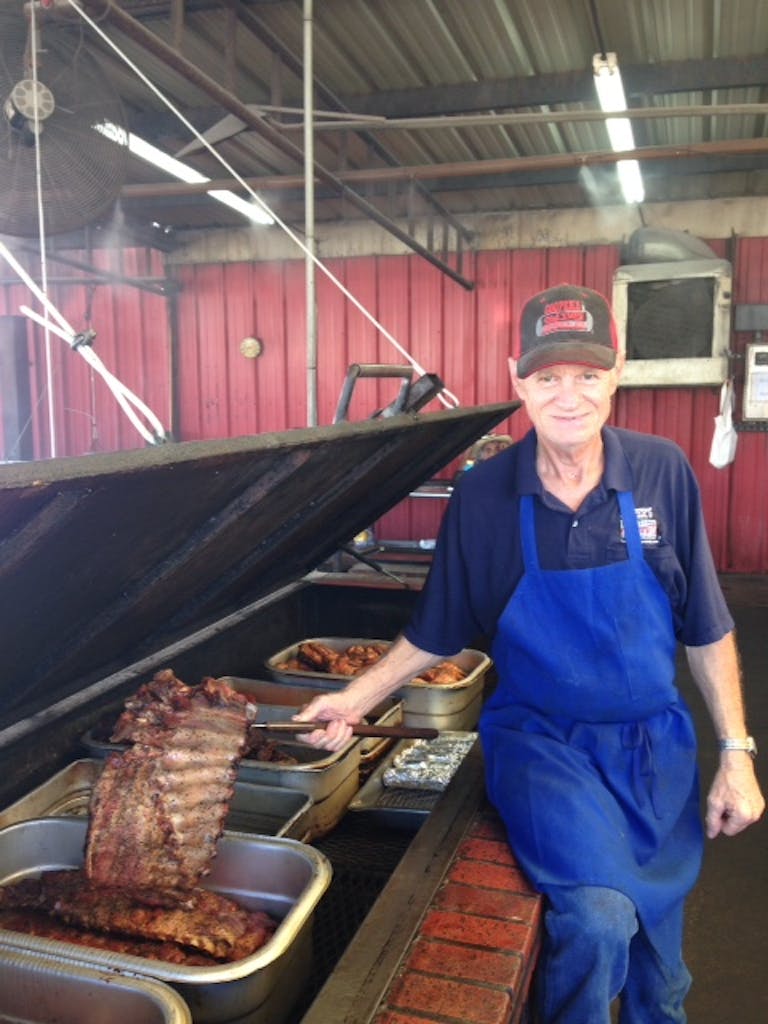 There’s more than one cook at a big operation like Cooper’s Old Time Pit Bar-B-Que in Llano, but Bo Phillips is the one who gets up early enough to get the briskets on. In their high heat method of cooking, the meat gets done a lot faster than anything cooked in the low and slow method, but cooking over charcoal brings  unique flavor to the meat.

During my last visit to Cooper’s I noticed a new pair of burn barrels full of lump mesquite charcoal. These were much smaller than the intimidating barrels from a year earlier, but I learned from Bo that Cooper’s hasn’t been burning mesquite down to coals for several years. Bo, for one, is glad for the change as it makes his job a little bit easier.

Daniel Vaughn: When did you start working for Cooper’s?

DV: Had you cooked barbecue anywhere else before?

BP: No. Just in my backyard.

DV: Are you originally from Llano?

BP: No. I’m from San Saba about thirty miles north of here. I grew up there.

DV: This is big hunting country around here. Do you still get a lot of hunters coming through Cooper’s?

BP: Yep. And then bluebonnet season is big time. We have a lot of old people get on buses from Austin and San Antonio. They travel the bluebonnet trail, and they all plan to stop by here for lunch. Then those eagles out on Highway 29, they bring a lot of folks here too. Now they’re having rodeos here nearly every weekend too.

DV: How much more business do you do during the week versus the weekends?

BP: It all depends on the season. Every weekend is busy, unless it’s a holiday, then it’s terrible busy. In the off part of the season during the week we never have any long lines, but we have a steady business.

DV: How many briskets do you cook for a typical weekday versus a busy weekend?

BP: Today I just put on fifty, but on the weekends it’s anywhere from seventy-five to a hundred.

DV: How early do you have to get the briskets on in the morning?

DV: Is brisket the most popular cut there?

BP: Yes. It’s most popular, then the pork ribs, then chicken, then pork chops.

DV: But Cooper’s is the “Home of the Big Chop.” I thought they’d be the big seller.

BP: Yeah, we sell a lot of them, but not as many as we do the brisket and ribs.

DV: You also have a number of things on the menu that not a whole lot of other places cook.

BP: Yes. We have beef ribs and not a lot of places have those. We also have pork loin, sirloin, and we’ve got cabrito. We used to do lamb chops as well, but they didn’t move very well so we got rid of those.

DV: Goat is pretty expensive these days. Do you know how much Cooper’s pays for it?

BP: I don’t really know. I just open up that meat and cook it.

DV: What do you season the meat with?

BP: The rub is just salt and pepper, it has some other ingredients in it that are secret, but it’s mainly coarse salt and coarse pepper. We season all the meat with that.

DV: You’ve got two kinds of pits there at Cooper’s. There are rotisseries in the back and the flat pits up front. Which one do you use for the different meats?

BP: In the back on the rotisserie we cook the briskets on one cooker. On the other stainless steel cooker, I do the pork ribs, chicken, pork chops, and turkey. Out front we cook cabrito, the beef ribs (usually), our prime rib, and the sausage gets reheated out front.

DV: Those pits have become a tourist attraction of their own. How often do you have photographers in your way back there?

BP: All the time. Somebody’s always back there and when the lids open they’re snapping away. They want to go show their friends and family that they’ve been here.

DV: The Llano location is the oldest of the three Cooper’s locations around the state. Have you visited any of the others?

DV: How many days a week do you work?

DV: Do you ever go out and eat anyone else’s barbecue?

BP: Not really. I’ll got to Galindo’s and eat there in San Saba.

DV: So you know the Double G Pit Stop there?

BP: Oh yeah. Old Bobby Galindo. I know him well. He does a good business on weekends. It’s pretty good. I also used to stop up at Laird’s here in Llano.

DV: Do you still eat your own barbecue?

BP: I’ll get sirloin and a beef rib, and a pork rib occasionally.

DV: Is that what keeps you so fit?

DV: Did you eat at Cooper’s

BP: Yeah. I always stopped in here to eat if I was driving through town.

DV: What did you do before cooking barbecue for a living?

BP: I was in business for myself. I had an oil company, then I had a private dining club. I also worked for my sister. She had a fire and safety company.

DV: Then you’re the right man to have around the pits if there’s a fire issue.

DV: How many other cooks work along with you?

BP: There’s usually five of us, unless we’re swamped on the weekends.

DV: When I was there last you were loading lump charcoal into the pits. I noticed that the big burn barrels are gone now. Do you burn mesquite down to coals anymore, or have you moved to all lump charcoal?

BP: We occasionally use mesquite, but this charcoal just lasts so much longer and it burns hotter. We could throw a pallet of mesquite in there and in an hour it was already powder if you didn’t use it.

DV: When did you switch over to just charcoal?

BP: I guess it’s been five or six years.

DV: Cooper’s also has a big mail order business. Is that cooked out of the Llano location?

BP: They have another facility down the road. There’s a government inspector there all the time. Just the other day they cooked five thousand briskets to get ready for Thanksgiving.

DV: What kind of briskets do you cook?

BP: Our brisket is Choice, and it comes from Greeley, Colorado.

DV: Well, if I counted right, this would be your fourth career. Is barbecue gonna be the last one?

DV: How many more of those early mornings do you have in you?

BP: I don’t know. I hope a bunch. I enjoy working here, and I like to cook. I’m not ready to give it up yet.

Correction: The original version of this story misidentified the opening year of Cooper’s Old Time Pit Bar-B-Que. The story has been updated.