The valet stand just outside the front door of Meat U Anywhere BBQ is a unique barbecue joint amenity. It might seem out of place for this type of restaurant, but owner Andy Sedino has his reasons. When he opened this joint late last year he saw it as a side business to go along with his already successful catering operation. He never expected to be this popular, as evidenced by the small parking lot and the trailer-mounted smoker taking up a few spots. He had to bring in that second smoker within the first month to respond to the demand, but there are worse problems to have in the restaurant business.

Sedino is well versed in restaurant management. Until 2012, he spent ten years as a managing partner and the Director of Operations for the North Texas franchises of the popular Rudy’s BBQ chain. If you’re familiar with Rudy’s you’ll find comfort in a similarly large menu of smoked meats along with breakfast tacos and creamed corn, but this joint has a feel all its own. With just eight tables it’s cozy, and things get even tighter when the line starts to swell. On a recent Friday during the lunch hour, there was a steady line of twenty or so hungry customers. 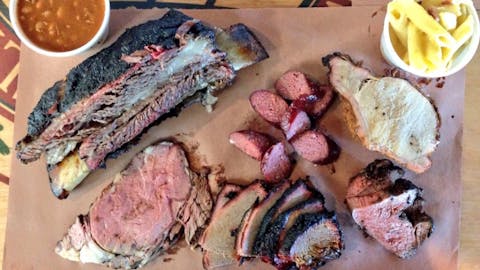 What they’re coming for is the best barbecue in the Mid-Cities. They do the standards well, but what really shines are the items on their special Friday/Saturday only menu. Bone-in pork loin, prime rib, beef tenderloin, and big beef plate ribs are all smoked and available by the pound (as are all the meats. No combo plates here). They’re all juicy and well-cooked. The pork loin was a little tight from over-cooking, and was all about the heavy rub. There wasn’t much smoke either. For that, go to the beef rib which was falling apart tender and featured a hefty bark and tons of flavor. Between the premium beef options (both $25 per pound) I preferred the tenderloin, and I say this as a ribeye lover. The thin sliced prime rib was pink and beautiful, but with so little bark it was missing the pop of the tenderloin. The tenderloin’s smaller and thicker slices held more seasoning and lots more smoke. The texture variation between the crust and the perfectly medium rare beef was also pleasing. 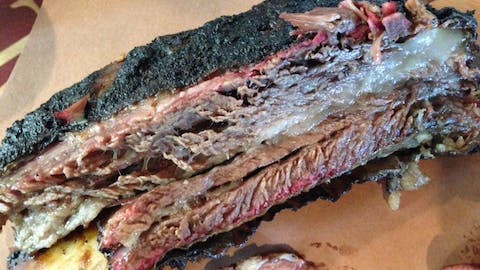 On the standard menu, brisket was a solid supporting cast member, but not yet a star. One on visit the fatty end cut given as a sample was the best bite. The rest of the fatty slices were overcooked to the point of having a pot roast texture. The next visit, the lean brisket was visibly dry once I got to the table, and had turned to jerky by the end of the meal. Both had great flavor and showed potential, but skip the lean for now. Also skip the pulled pork unless you prefer the sloppy joe style with an already-been-chewed texture. The best pork option was a sleeper on the menu which sometimes runs out before lunch. Chunks of tender pork shoulder is stewed with green chiles in the pork guiso, and it comes wrapped in a stout flour tortilla (not made in house). Order it as your appetizer.

Sedino pays special attention to the poultry on the menu. There’s a thick cut turkey breast with loads of flavor from an herb-heavy rub and a good dose of smoke. A huge chicken half was a juicy value at $8, and big enough for two. It was good and smoky even without the skin that could have been more crisp. The beef-heavy German sausage links from the Thorndale Meat Market near Taylor were smoky with a crisp casings, but they were a bit dry. Pork ribs were solid. They’ll please the competition barbecue crowd more than purists with their heavy seasoning, sweet flavor, and ultra-tender texture, but these were good St. Louis cut ribs. 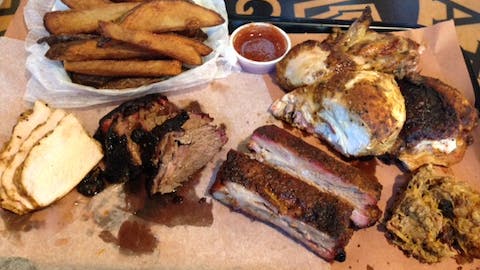 Sides were a mixed bag. Campfire beans had a nice balance of chile powder and sweetness and the generous helping of thick cut fries were crisp and pleasantly salty. The potato salad was a classic mustard/mayo recipe, but the slaw was “Notcha Momma’s” for a reason. It’s a vinegary mish-mash of cabbage and ramen noodles that leaves and oily coating on the mouth. The mac & cheese featured penne pasta and a sauce so reliant on chicken stock, that it’s hard to detect the cheese.

Meat U Anywhere BBQ feels like a neighborhood barbecue spot despite the valet stand. It brings a new level of quality barbecue to this area, especially with the addition of the Friday and Saturday menu items. It’s worth more than the fifty minute drive from my house, and if I lived a little closer I’d probably be a regular.