It’s not exactly new, it’s not flashy, and it’s not dogmatic about the barbecue style it serves, but Off the Bone Barbeque in Dallas’s Cedars neighborhood is just good. Dwight Harvey has run this joint in a converted gas station with his son Steven since 2008. It was a scheme to keep Dwight busy after retirement, and to take the next step in their successful catering business. I’ve written about it in the past, and spent too much time focused on their sauceed up ribs and the lack of bark on the brisket. Despite those qualms, I’ve found myself coming back again and again to enjoy the rest of the menu, and it was time for an update. 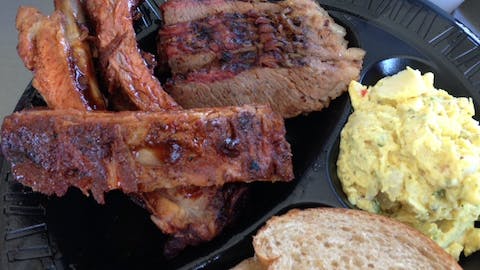 The brisket and ribs haven’t changed, but maybe I have. Who cares if they want to serve tender baby backs brushed with a sweet tomato-based sauce? Sometimes a barbecue craving calls for that, and there’s no better place in Dallas to cure it than Off the Bone. The ribs are tender and just toothsome enough to stay on the bone after at least the first bite. You can get better sliced brisket in Dallas, but I’ve never had them serve dry, undercooked, or less than fresh brisket here either. It’s a small family business that truly is interested in your experience. If something’s off, you can either find Dwight darting around the small dining room or behind the counter.

The care also goes into the rest of the menu. Two kinds of beans can be had. One is honey spiced baked beans. They’re as sweet as advertised, and are cooked into a stew-like consistency. The charro beans get a sprinkling of fresh cilantro and generous chunks of rib meat. The ends of the rack are often too puny and dry to serve, so they chop them up for the beans. Homemade potato salad is heavy on the mustard and egg, while the slaw has some unexpected additions. Crunchy cabbage is mixed with a blue cheese dressing that’s not overpowering and topped with chopped, crispy bacon – and that’s the key. If the bacon were mixed in, it would be limp and lose the crunch that makes bacon so appealing. It tastes more like a wedge salad than another boring version of mayo slaw. 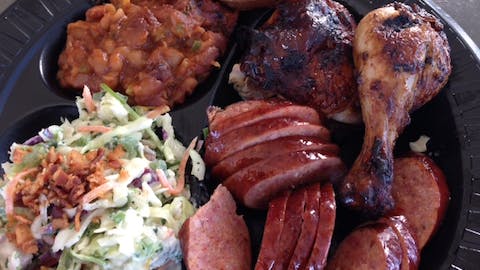 Bacon also comes atop the jalapeño corn muffins. They are worth the extra charge, but small slices of a better-than-average wheat bread come with every plate. If you order a sandwich, what you get is two sliders on stout buns. Ask nice, and they might let you mix and match with chopped beef and pulled pork. I preferred the pork (left, below) that was already mixed with a thin spicy sauce. 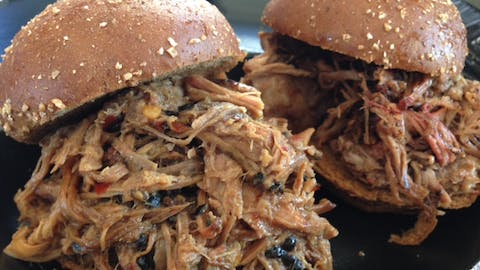 One item I’d never bothered with was the smoked chicken, but it’s a stunner. The dark meat was juicy with a crispy skin. It was just the right amount of smoky and salty without being overcomplicated. The habañero sausage could have used some of that smoke, but it had a firm, even heat. 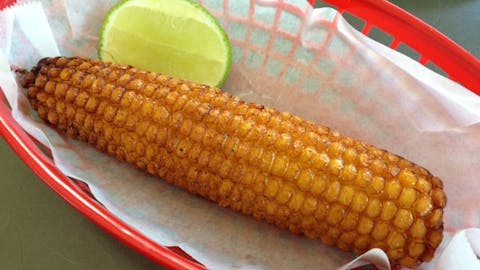 Corn on the cob isn’t exactly in season, but it tastes great deep fried any day of the year. A full cob is dropped into the fryer at the moment you order it. Once it floats, the cob is taken out and covered with Cajun seasoning and garnished with lime. You can’t really see the seasoning and the lime juice doesn’t do much to liven it up visually, so the intense flavors sneak up on you. It’s more crisp than greasy, and it’s hard not to eat the whole cob. I feigned difficulty in splitting it with a plastic knife just so I didn’t have to share it with my dining partner.

Other joints in town might have smokier brisket or juicier sausage, and most don’t sauce up their ribs, but Off the Bone is still worth a visit. There aren’t many duds on this big menu in a small building, and it’s all served by people who care that it’s good. That’s something to support.