Joshua and Paige Kaner opened Pieous in early 2013. They took over an old Cartwright’s BBQ building southwest of Austin on Highway 290. The plan was always to cook with fire, so a custom wood-fired oven was installed to cook the pizzas. A rotisserie smoker was left behind by the previous owners, so they decided to add house-made pastrami to the menu. Now about half of the customers add pastrami to their order at this pizza joint.

For the pastrami, Joshua starts with whole, untrimmed briskets. He then cures them in a wet brine with his own blend of spices. “There’s lots of garlic and lots of other good stuff,” is all he’ll offer on the recipe. The rub is also a complicated one. There are the signature pastrami flavors of black pepper and coriander plus ten other ingredients. After being dried and rubbed, the briskets are smoked with live oak for about fourteen hours before being moved to a C-Vap to steam. 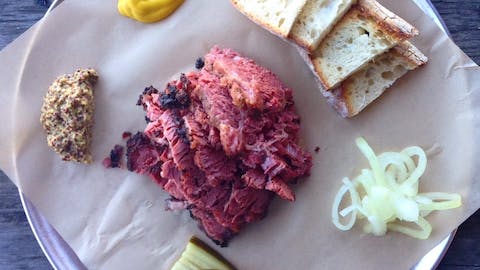 The result is some fantastic sliced pastrami. You can order it on a platter (above), or on a sandwich, and Kaner will begrudgingly add it to a pizza. “They were never meant to be together” he tells me. It’s not listed as a pizza topping because Kaner doesn’t like how dry it becomes after a trip in the hot oven. He suggests adding a quarter pound and crumbling over top the finished pizza at your table if you insist.

While ordering at the counter, I was asked if I preferred lean or fatty brisket. I’d suggest a mix. Both were juicy and fall-apart tender. There was plenty of black pepper and the seasoning was well balanced with the smoke, although smoking meat was something new to Kaner when he started here. “Not being from Texas and not doing Texas barbecue my whole life, smoke was a seasoning I wasn’t used to.” But he’s careful not to over smoke those briskets. “A kiss of smoke adds a great seasoning. If you drown it in smoke, that’s all you taste. You don’t even taste the meat.”

You’ll want to taste the meat at Pieous because it’s some of the best pastrami I’ve eaten, and that includes a few famous places in New York. This pastrami is thicker cut than you’ll find in most delis, so any smoked brisket lover will feel comfortable digging into a platter. It even comes with pickles and onions.