A nondescript metal door on the side of the building is the entrance into the pit of this joint with more than one hundred years of history. Prause was a meat market in the late 1800’s and has been a barbecue joint nearly all of its life, according to one of the family owners, Mark Prause. He seemed to know all the locals that passed through the aforementioned back door as we stood and chatted. I had come through the front door like an amateur, marveling over the selection of fresh meats in the large case. I was pointed to the rear of the space to place my barbecue order, and at eleven in the morning they were already running low on items. Given the lack of a line, I was surprised to hear that, but I must have hit a slight lull as the line snaked around to the front by the time I left a short while later.

Given the distance from La Grange to other major cities, and the inexplicable lack of statewide fanfare associated with this joint, the crowds were mainly locals—many enjoying a quick bite alone on what is probably a standard weekly visit. Juxtapose that with three camera-totin’ self-proclaimed barbecue aficionados on a weekend-long road trip to find the best ‘cue in Texas, and you might expect some stares, but everyone seemed focused, no downright mesmerized by the meat in front of them, too much so for them to notice our table. 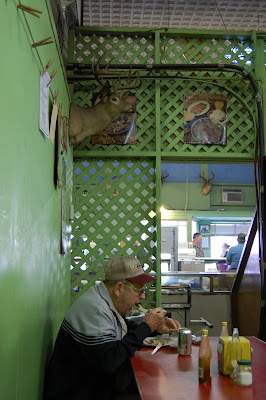 We were no doubt enthralled by our bounty of brisket, pork ribs, and a healthy slice of pork roll (that’s what I was told when I inquired about the cut. I’m not sure where the “roll” is on a swine). This being our fourth stop of the day, you may expect that no meat could still taste good, but this brisket was the closest to perfection of any meat that has passed these protein-stained lips. The crust and smoke line were pronounced, the texture was almost buttery due to the perfectly rendered fat, and the flavor was robust with smoke, salt, pepper, and love. I was in barbecue heaven. The pork ribs were country ribs, so they were much thicker and meatier than a standard spare rib. The meat was a bit dry, but incredibly flavorful if not intensely smoky. Oddly enough, we all agreed that the rendered fat on the crust of these ribs tasted just like fried chicken skin. Who knows how they make that happen. The pork roll was great as well. It wasn’t as dry as the picture makes it seem, and the flavor from the smoke and the salty crust was intense. 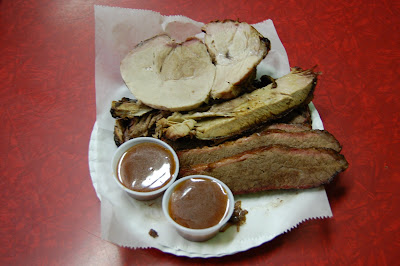 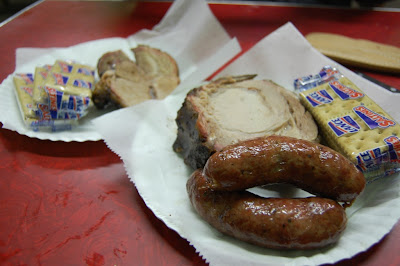 Much of the enjoyment of this place obviously came from the food, but the surroundings were a sight to behold as well. I stood for several minutes watching the pitmaster carefully check the doneness of the meat before placing it in a tub to be carried to the meat counter for serving. This room had layers of history covering the walls and the delicious aroma of post-oak smoke. 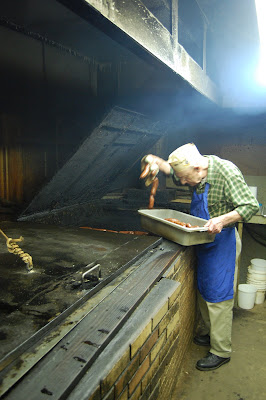 No survey of Texas barbecue is truly complete without a stop at this quintessential joint, and it’s worth the drive from anywhere in Texas.