Memphis, Kansas City, and Boston have their sweet baked beans, but in Texas, we prefer pintos, and we prefer them savory and a little spicy. Pinto beans have become a pretty typical mainstay on barbecue joint menus, likely because the canned kind is cheap and easy to buy. And, even out of the can, they’re pretty good, but it’s hard to compare with a batch cooked from dry beans.

For many, the idea of soaking the beans overnight, then simmering them for longer than a Cowboys football game sounds too daunting. I personally don’t like to plan ahead that far either. Which is why I now only cook beans in a pressure cooker,* a method that only takes a ninety minutes. The beans alone make a great side dish, but there’s enough meat in this recipe to make it a meal too. Really, the point of this recipe is to get as much meaty flavor in here as you possibly can. 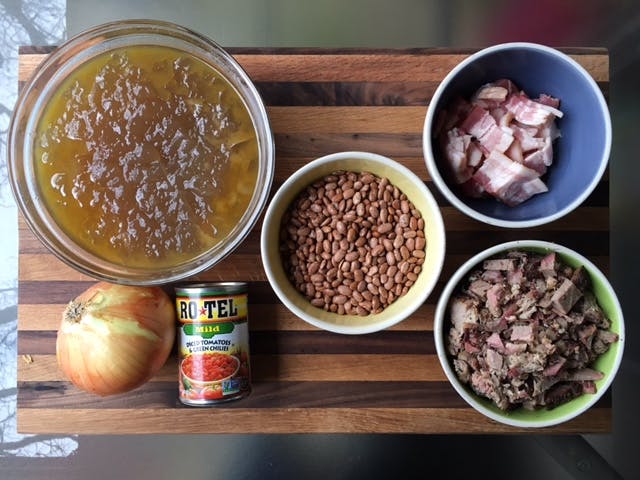 These are barbecue beans, meaning they’re made with barbecue (leftovers), barbecue sauce, and barbecue rub. We’ll get to all that eventually, but see above for what you’ll need to get these beans started. Let’s begin with our base of bacon and onions. 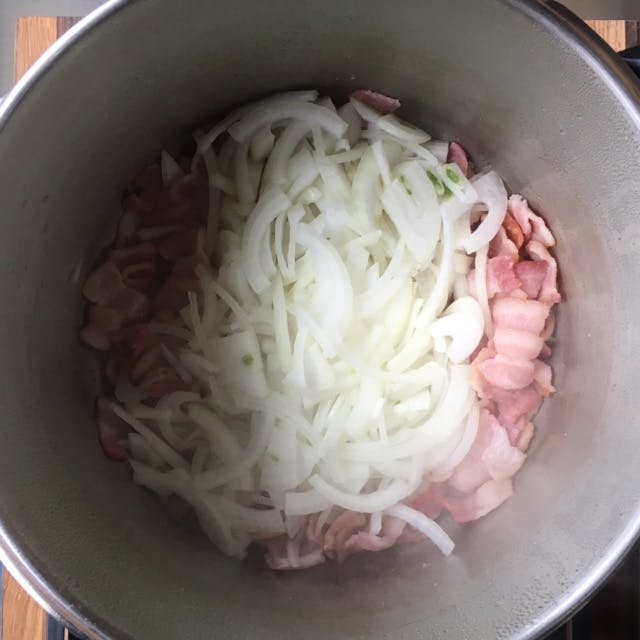 Take a 1/2 pound of sliced bacon and cut it into 1-inch chunks. Over medium-high heat, saute the bacon in the pot until it let’s go of some grease, enough to cook the onions. Quarter a large onion, and slice it thin. Add them to the bacon and stir. Saute them until the bacon is cooked and the onions have turned translucent. Deglaze the pan with a little of the chicken stock if its getting too brown on the bottom. 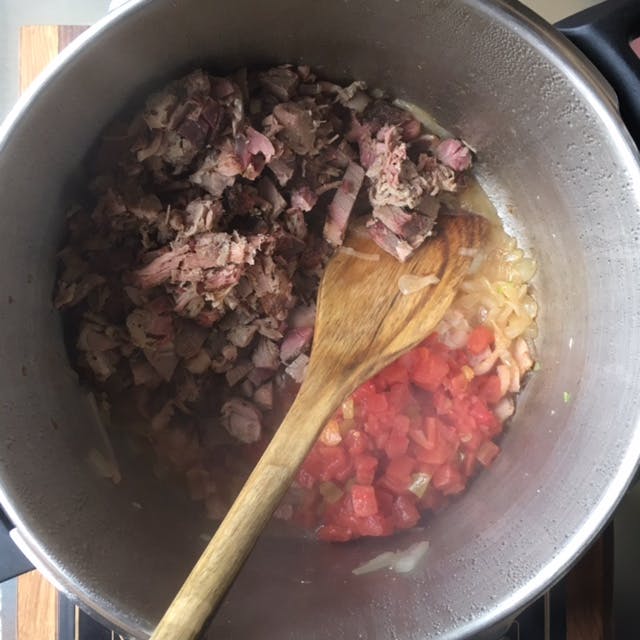 Add a can of Rotel and the chopped barbecue. I use leftovers from my various road trips, or you could buy a pound of chopped brisket from your favorite barbecue joint. I prefer brisket. Rib meat also works well. Pulled pork becomes stringy, so mix it in with some brisket. On this particular day, I had pulled pork and brisket from Flores Barbecue in Whitney and from Harris Barbecue and The Vault Smokehouse, both in Waxahachie. (Let this serve as a reminder that awful barbecue isn’t going to get better in these beans. Use some barbecue that you’d have eaten on its own.)

Stir this mixture together until its heated through. 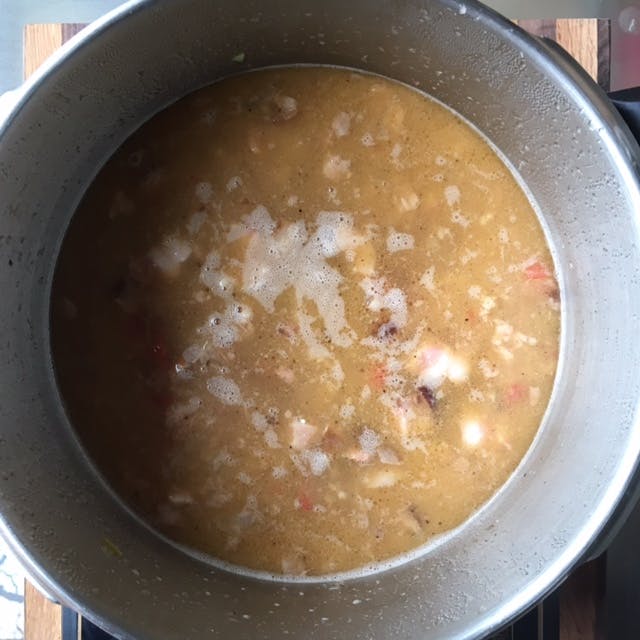 Now, add in the dry beans, straight from the bag (but picked through for stones and such), and the chicken stock. Making your own stock is easy enough if you save a couple chicken carcasses. I made this batch of stock from a Greenberg smoked turkey the family had just polished off. Just add enough water to cover the chicken (or turkey) bones in the pressure cooker, and you’ll have usable stock after just 30 minutes. That homemade stock will also be far better than canned chicken stock. See the glass bowl on the top left in the photo way above? That smoked turkey stock is still cold, so it looks chunky. That means it’s full of wonderful gelatin, which makes everything better.

The beans will require about 6 cups of stock. Add enough liquid to cover the bean mixture by an inch, which may require a little more or less than 6 cups. Give it another good stir, then put the cover on the pressure cooker. Turn the heat up to high until the pressure cooker whistles, then turn it down to one notch above the lowest setting. Let the beans cook for 90 minutes. 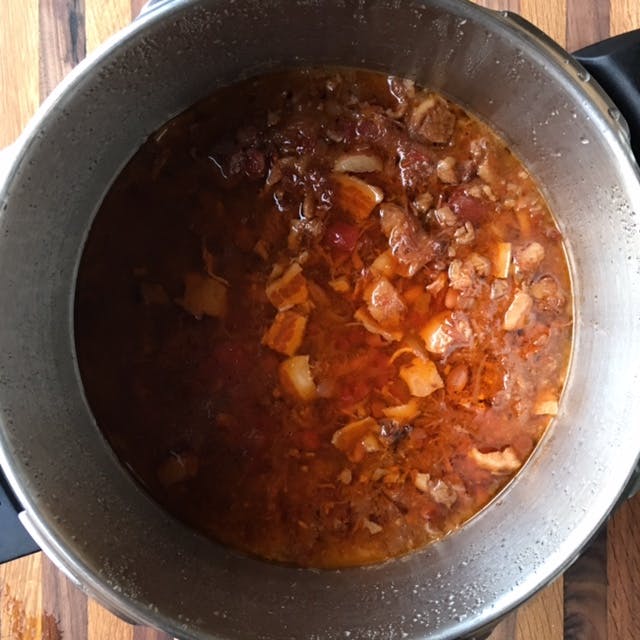 The beans will be a little watery, which is why I like to mash a few beans. Use a potato masher and break some of the beans up. This makes the whole mixture a little creamier. Notice that the bean have not yet been seasoned. Between the bacon, barbecue, and stock, it’s hard to tell how much additional seasoning they’ll need until this point. 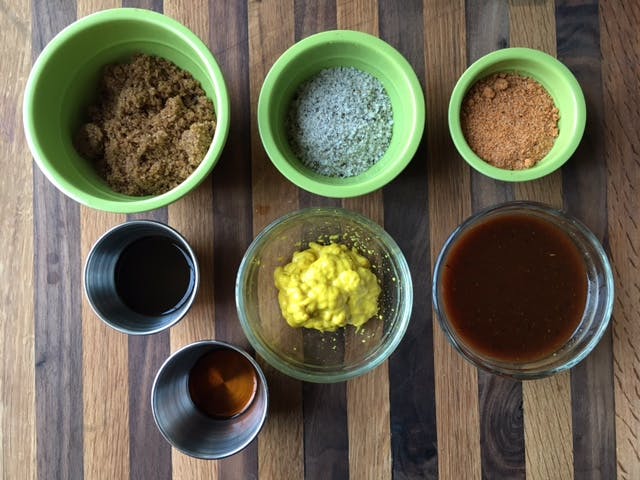 Now it’s time to add the seasoning. The bite from yellow mustard works nicely, Worcestershire sauce adds umami, and throw in some of your favorite barbecue sauce too. Don’t make them too sweet, but a little brown sugar rounds out the flavor. It’s optional, but I also enjoy a few dashes of fish sauce and a sprinkle of barbecue rub. I have kids who haven’t taken to spicy food yet, so I put the hot sauce on the table.

Mix it together and give them a taste. If it needs it, add some salt and black pepper to your liking. They’re ready to eat as is, but beans are one of those things are only improve overnight. Enjoy the fastest (non-canned) beans you’ve ever made, and keep enjoying them as leftovers. I even like them cold out of the fridge. 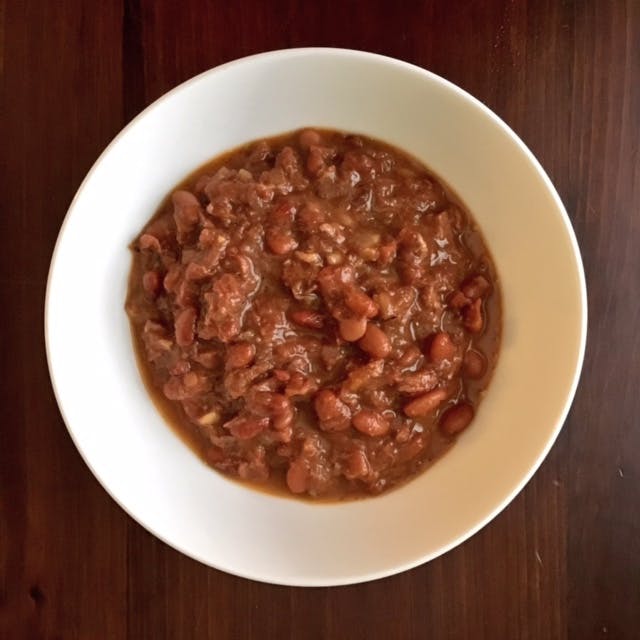