Thousands of people lined up along Manhattan’s Madison Avenue over the weekend to try Rodney Scott’s barbecue. His skills as a South Carolina whole hog pitmaster are known across the country, so the long lines during the Big Apple Barbecue Block Party were no surprise. The mystery was how Scott kept his cool and his signature smile for all the onlookers. Plenty of pitmasters in his situation would have been terrified.

The “Big Apple,” as most of the pitmasters refer to the event, just completed its fourteenth year. The scene is an unreal juxtaposition of hot asphalt and intentional open fires. For two days, smoke fills the closed-off streets that surround Madison Square Park as barbecue joints from across the country set up their rigs, build fires, and cook a ridiculous amount of meat to serve the masses. A couple Texas joints attend, but in an upset, the best brisket and beef ribs came from Atlanta (Fox Bros. Bar-B-Q) and Brooklyn (Hometown Bar-B-Que). The most impressive pork ribs, another part of the Texas Holy Trinity, belonged to South Carolina’s Rodney Scott.

“Some of the paint was still tacky when we picked it up,” Scott told me, showing off his new rig. A fleet of eight steel pits hadn’t had time to get their flat black finish scratched up since they hit the road on Thursday. “The first fire they saw was on Madison Avenue,” Scott told me, laughing. It can be difficult to use an unseasoned pit, and this was a trailer full of eight untested smokers. But Scott had 500 racks of ribs to cook for the event’s first day. It’s like Stevie Ray Vaughan playing for a full house with a brand new, untuned guitar.

Not to mention that Scott chose ribs to smoke for the masses. His family’s restaurant, in tiny Hemingway, South Carolina is a whole hog barbecue mecca that helped define the style of barbecue in the Pee Dee region. Strands of smoky pork with rust colored vinegar-pepper sauce is the lunch and dinner (and sometimes breakfast) choice of local barbecue fans. And Scott knows whole hog barbecue like Aaron Franklin knows brisket. His new location in Charleston, Rodney Scott’s Whole Hog BBQ, has it right in the name. Hell, Rodney Scott might just be pig latin for whole hog. But, instead of his usual masterpiece, Scott cooked 1,250 racks of ribs over two days for a line of New Yorkers stretching out a half block for hours at a time.

And they were good. These ribs were something unusual at an event where other pitmasters prefer to serve glossy baby back ribs fit for a magazine cover. Scott seasoned racks of St. Louis cut ribs (as a spare rib man, this was the first time he’d cooked this type of rib) with a more complicated rub based on his signature whole hog seasoning, then cooked them over direct heat for three hours. He mopped them with a vinegar-pepper concoction while they smoked and sizzled. Scott uses the same process in his Charleston restaurant, but he hadn’t done it for this size crowd before. It ate more like a pork chop than competition barbecue. Some folks complained that they were too tough. And, sure, they didn’t come cleanly off the bone, but I didn’t mind. It was flavor worth a little more effort.

Scott told me he learned to cook ribs on the job as he prepared for his Charleston location, which opened in February. He knew the menu needed to diversify for the city crowd. Charleston would require more than Hemingway’s whole hog, slaw, and hog cracklin’s on the menu, so Scott added ribs, chicken, fried catfish, and a thin-sliced ribeye sandwich. These were meant to be a supporting cast, but the “Whole Hog BBQ” portion of his sign has been ignored by lots of those new customers. “Ribs [full spares] are the biggest seller, the sliced ribeye sandwich is number two, and whole hog is third,” he told me, perhaps puzzled by it all. You would be too if you’ve eaten his whole hog. Imagine a location of Franklin Barbecue in Charleston where brisket is in third place behind pulled pork and smoked turkey.

Still, it’s hard to argue with the popularity of these ribs. With the seasoning and the mop sauce, they were similar to ones you might find at Southside BBQ in the Texas Hill Country town of Cherokee. They’re cooked over direct heat, so the fat from the ribs drips into the coals. The flavors are layered—starting with a rub of salt, pepper, paprika, garlic, and cayenne. The mop sauce adds some heat and vinegar tang, and the smoke fills in the background. Meanwhile, the intense porkiness still shines through. Not bad ribs for a whole hog cook.

I talked to Scott after he’d returned to Charleston. He looked back fondly on a successful Big Apple, but admitted, “I was terrified going into it.” He had a right to be. Scott abandoned the whole hog he is famous for to cook ribs, a cut he’s been practicing for just a few months. He did it on a pit he’d never used while parked on a street in Manhattan as thousands of people, many of which had anxiously awaited a bite of his whole hog, waited to critique. The term pitmaster might be one that’s getting watered down, but Rodney Scott is an undeniable master of the pit. He is bolder than most, and has shown that he certainly isn’t scared of a barbecue challenge. 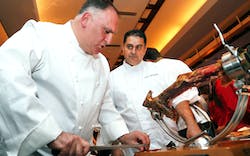 Texas Comes Up Short at the James Beard Awards 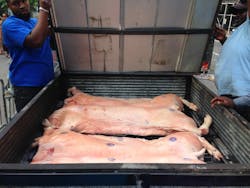