Gatlin’s BBQ in Houston already had a great pitmaster in owner Greg Gatlin, but last year they hired a chef. Thanks to the influence of Michelle Wallace, who was most recently at Houston’s, you’ll find some updates to the Gatlin’s menu—like a smoked turkey and house-made pastrami sandwich and specials like Korean-style short rib tacos. During my latest visit, they were testing smoked bologna.

Smoked bologna is common on Oklahoma barbecue menus, and can also be found in several North Texas barbecue joints, but it’s rarely made in house (Cattleack Barbecue in Dallas is one exception). Usually, a fully cooked, commercially made tube of bologna is smoked long enough to warm it up. Its end up tasting like, well, bologna. Gatlin’s wants to bring their own unique flavors to their bologna, so Wallace has been tweaking their recipe. They now think they have a winner, which should be on the menu next week (or today if you ask nicely). 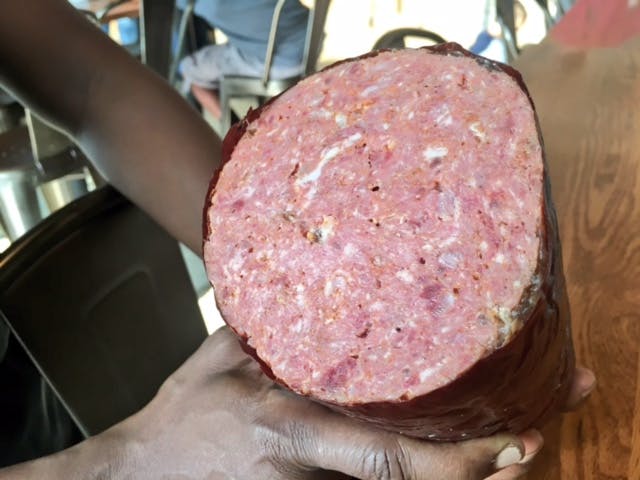 It’s a mix of ground beef cheeks and pork shoulder spiced with black pepper, paprika, dry mustard, and “a few other things,” according to Wallace. For the cooking process, there’s no boiling or steaming. The enormous bologna goes into the smoker raw and comes out fully cooked. For service, it is sliced thick, crisped on the griddle, and served as a sandwich. “If it takes off, we might sell it by the pound,” Wallace promised, but it was excellent between slices of grilled bread. I suggest adding a fried egg.

Bologna may not be a big barbecue item in Houston, but in a town known for sausage making, I see this just as an extension of that tradition. As Wallace puts it, “It’s literally just a giant sausage.” It’s a delicious newcomer to the city’s house-made sausage repertoire.