I’m of the opinion that most foods can be improved when they’re smoked, and one of my favorite dishes that proves this proclaimed axiom is smoked turkey. We’ve got plenty of great options in Texas, all of which likely beat the oven-roasted turkey that your family overcooked at Thanksgiving. But when it comes to poultry, there’s just something special about a fried bird. The juicy meat and crispy skin achieved during the frying process is nearly impossible to mimic in an oven or a smoker. But the one great disadvantage to a turkey that is only deep fried is that it’s often dry and not so great for leftovers. So how does one reconcile the shortcomings of these two preparations? Combine the two. I recently  deep-fried a smoked turkey, and the result was the best version of this dish I can remember.

The recipe is simple and fast, but it does require some equipment.

I picked up a thirty-quart turkey fryer at Academy for $40 and a jug of peanut oil for $30. The fryer you can reuse, the oil not so easily (unless you can store three gallons of oil in the fridge). 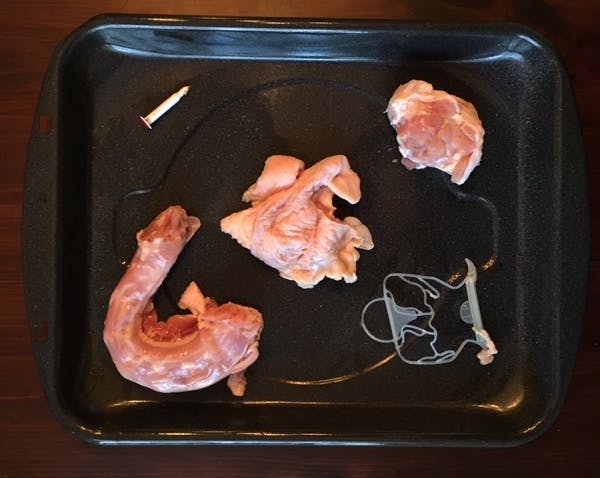 A fresh turkey is best, because you don’t have to worry about thawing it. Plus the fresh ones are usually smaller (mine was 14.5 pounds). For the prep, a few things need to be removed from the turkey: the neck, giblet bag, excess fat, and skin around the openings, plus the plastic truss do-hickey (official term) around the legs and the pop-up thermometer. Use the neck and giblets for gravy, but none of the rest will taste good fried. I also took off the turkey tail (top right, above) because I wanted to fry it on its own. It’s a tasty treat.

You can keep the rub as simple or as complex as you like. I rubbed mine liberally with Holy Cow rub from Meat Church, not because of the irony of the name, but because it’s salt, pepper, and a few spices without any sugar. I didn’t want the sugar to burn during the the frying phase. 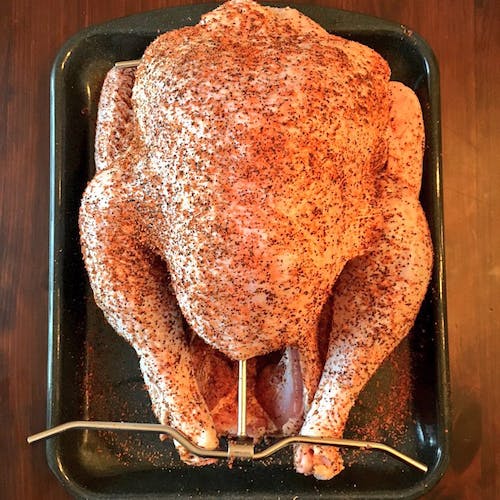 SMOKING PROCESS:
I used a Pit Barrel Cooker, which has an attachment for hanging turkeys inside, though you can use any smoker you’d like. Personally, I’ve had good luck with very juicy chicken and duck in the PBC, and it didn’t let me down this time, either. 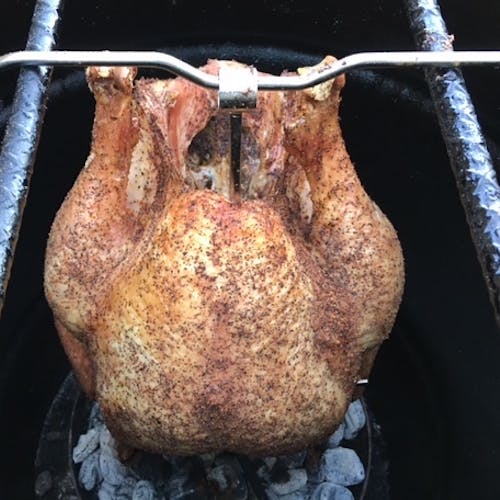 Smoke the turkey until it reaches an internal temperature of about 145 degrees. For my 14.5-pound turkey, that took 3.5 hours. You want it to be a bit undercooked so you can finish the cooking in the fryer.

At 145 degrees, the turkey can rest for an hour indoors, or even a couple of hours inside a cooler. Or you can head straight to the fryer. This way you can be a little more flexible with your timing since it’s only going to take six minutes in the fryer. If your guests are like mine, they’ll want to watch. 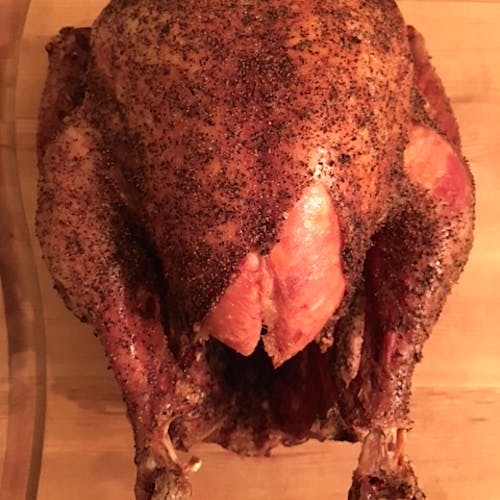 FRYING PROCESS:
Yes, you read that right. You just bought a turkey fryer and a $30 jug of oil for only six minutes of glorious and vigorous bubbling. It may take a little longer, so be sure to check the internal temperature of the turkey after it comes out of the oil. Instructions may differ from fryer to fryer, but the three gallons of oil was still below the “fill line” on mine even though it covered the 14.5-pound turkey. I heated the oil to 325 degrees and dropped in the bird. When it came out, it was ready to carve. 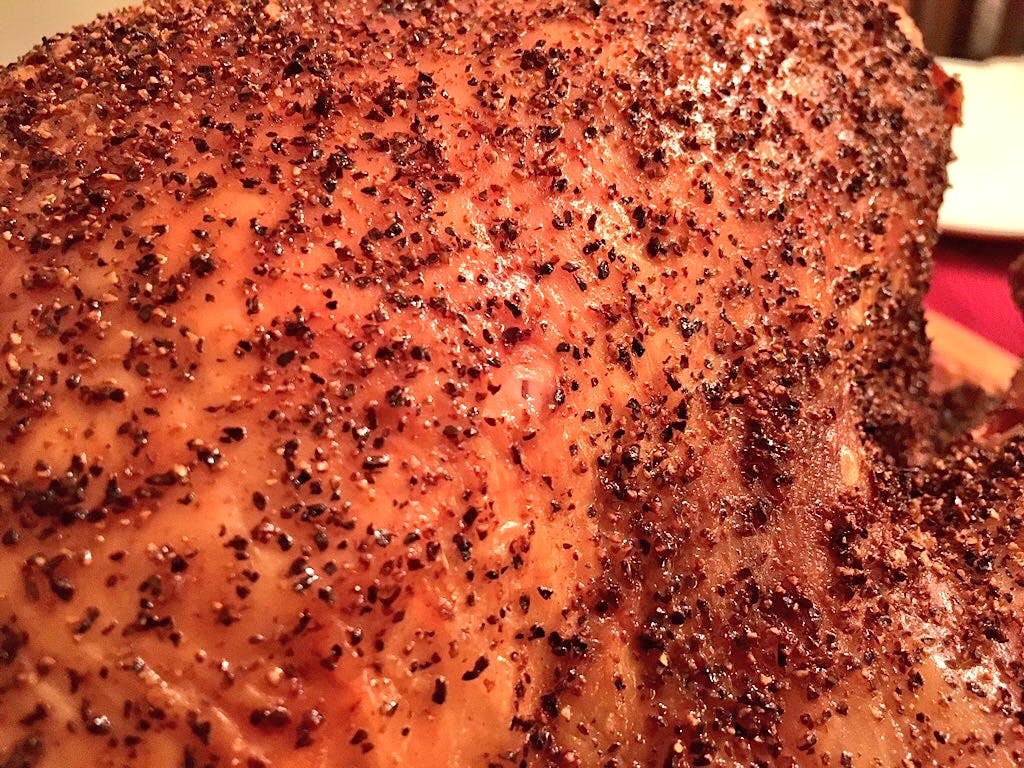 The wings were extra crispy, so I whipped up a simple batch of buffalo sauce (butter and hot sauce) and tossed them until coated. They were so good, I might do a batch of a dozen turkey wings for the Super Bowl. 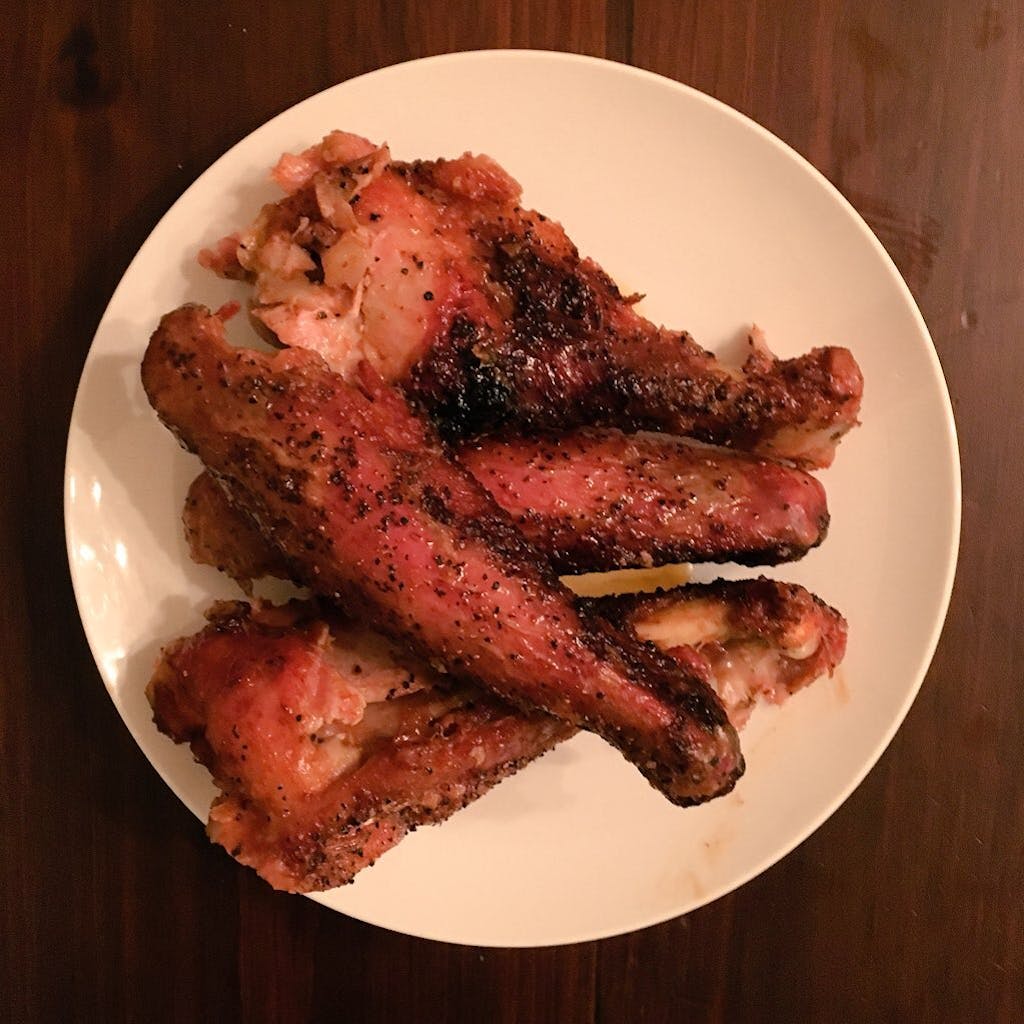 It’s smoked and it’s fried, but this turkey is easier to make than it sounds. It also doesn’t use up any precious oven space. Try it for the holidays, and it might just be the best turkey you’ve ever eaten.