There’s a little red building with yellow trim along Kuykendahl Road on the north side of Houston. The fresh coat of paint is hard not to notice even while speeding along, and inside is some of the city’s best and most thoughtful barbecue.

For Steve and Sherice Garner, this building has been a long time coming. The business started small several years ago when they were cooking just for their church. They then purchased a barbecue trailer that they ran on the weekends. It moved around the city several times, but they were always looking for a permanent home. Their current home once held another barbecue spot, but sat empty for some time. Steve tried for a couple years to get into the building, and after being rebuffed many times, the owner finally relented. About the same time, their trailer was rear-ended on the highway while they were on their way to a city inspection. It did an ungraceful 360 flip in the middle of the road and stopped traffic. Everyone was safe except the trailer, which was beyond repair. Now, the Garner’s nomadic ways are behind them, and they couldn’t be happier for the stability that a brick-and-mortar brings.

The interior is cozy. Just inside the door is the counter staffed by friendly folks eager to offer suggestions. The menu has an obvious choice for newcomers. Four meats and four sides can be yours on a platter called “Taste of the South” for just $26. It makes their $17 signature stuffed baked potato look pricey, that is until you receive the “Big Poppa” as it’s named.

The Big Poppa starts with an enormous Idaho potato. Steve Garner said he goes through every forty pound box to find and save the biggest specimens for bakers, while the rest become potato salad. A generous helping of three meats – chopped brisket, sausage, and a pork rib – top the potato which also holds butter, cheese, and bacon. Sticking my fork down through the sour cream and green onion garnish, I realized this is about the only context where it seems normal to eat barbecue topped with sour cream. My fork nearly disappeared into the hulking mass, but the tender potato yielded easily. Without a good potato underneath, no barbecue stuffed tater can be a success, and this one was a showstopper thanks also to the great chopped brisket and house recipe sausage.

An edited version of the menu is painted on the building, and the quotations around “homemade” sausage are accurate. The Garners have worked with a local meat market to make sausage to their specifications, and the result is worth the effort. It’s got a punch of seasonings that go beyond salt and pepper. There’s some garlic and red pepper in there, and heavier grind for a great texture. The boudin is made by the same folks and is a regular special. There’s more liver in there than most boudins, but it’s a good one especially with the house made firecracker Saltines. 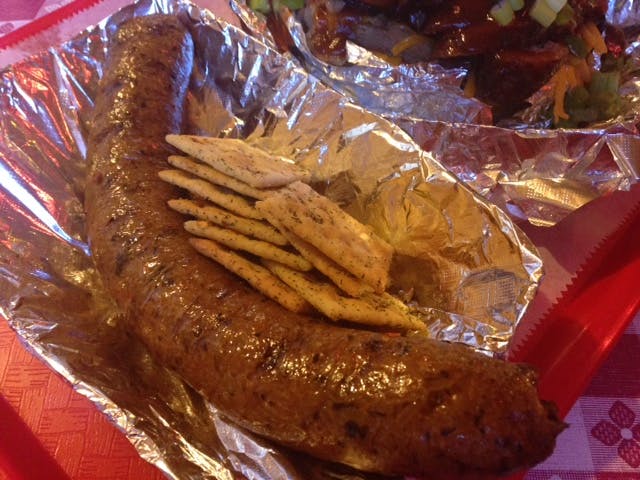 Garner grew up in Lufkin where he says “barbecue is what brought us together.” His mom was the barbecue cook. “She always did ribs, sausage, and chicken. She never cooked brisket.” That’s where he learned that basics, but the brisket is his own development. The rub is generous, but not too heavy. “I put flavor in all my food,” he tells me. You won’t find cracked pepper in there. Garner says he never used it growing up, so it’s paprika, salt, garlic powder, and a few other spices. He coaxes a pleasant level of smoke from the Ole Hickory smoker that came with the building. He said he doesn’t use the gas-assist while the meat is smoking. The luscious fat, and juicy, tender meat was impressive. 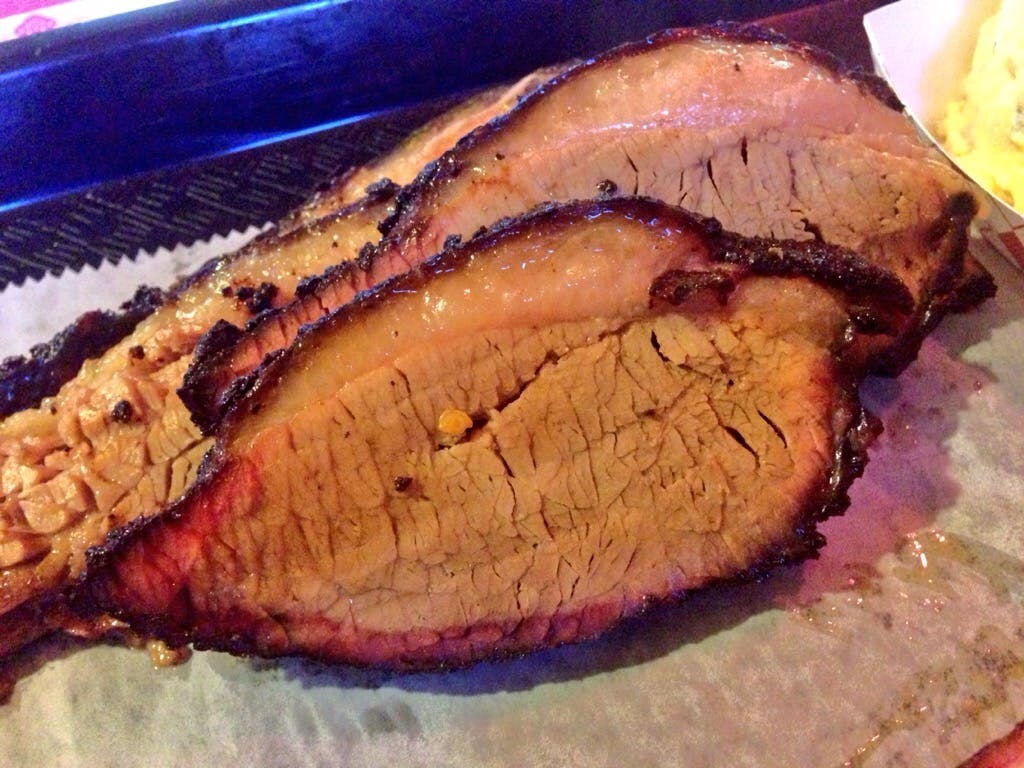 Ribs are well smoked with exemplary texture. The rub is a sweet one, but still well balanced with the smoke. Slices of salty smoked turkey were some of the best I can remember. It wasn’t dry by any means, but also didn’t exhibit the fake wetness that many brined birds can bring. 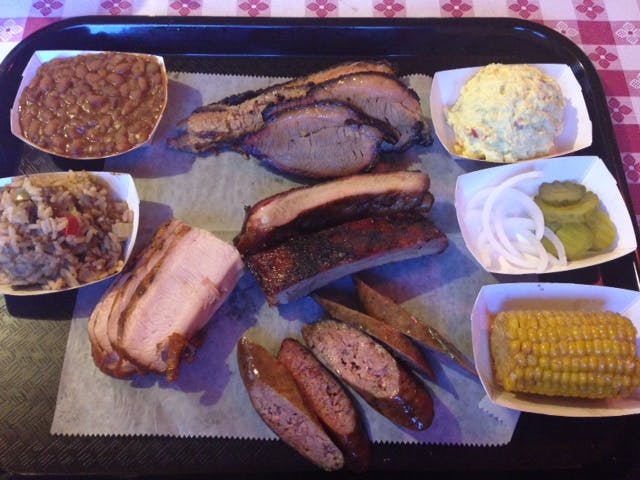 Besides the mushy corn drenched in butter, the array of homemade sides were well executed. It was the dirty rice that I kept going back to. Dessert selection makes for a tough decision since there are so many options and the staff likes them all. I went with a very unphotogenic strawberry cake, which was moist and fluffy with a heavy icing. It was also the only strawberry cake in recent memory that contained large chunks of actual strawberries.

It’s refreshing to see a new barbecue joint in East Texas adding some East Texas flavor. Houston has plenty of Central Texas disciples putting out great but austere barbecue, so Southern Q does themselves a favor by providing something unique. On the map, it seems like a haul from the middle of Houston, but I was surprised how quickly I moved along Kuykendahl after exiting from I-45. No matter the distance, what the Garners are cooking is worth the trip.