Rene “Ray” Ramirez took his first trip to Texas just three years ago. From the menu and the décor in his Huntington Park barbecue joint, just outside Los Angeles, you’d think he was a Texpat. He gushes about Texas so passionately that you’d never guess he was California born, and has been in the same house just down the street from his restaurant for nearly thirty years. He told me on a recent visit that he aims to “give the people who never get to go to Texas the experience of what I feel when I go over there.”

It started in the backyard of his house in January of 2014. Ramirez operated “underground,” serving barbecue illegally as a side gig from his weekday bank job. “Within eight weekends we got so popular we were selling $9,000 worth [of barbecue] in a weekend,” he said, hardly believing how quickly he went from a single pellet cooker to a dozen in order to meet demand. He had never had a food service job, and hadn’t cooked a whole lot of barbecue when he first opened. The menu back then was filled with stuff like pulled-pork nachos and tacos. The smoked meat wasn’t the star. As Ramirez explained, “I hadn’t been to Texas yet.”

The backyard operation was shut down twice by the city, and the second time they made him an offer. They’d help him find a building and get financing if he’d agree to go legit. Huntington Park gave him a grant for permits and to create a business plan, and Ramirez remembers,”we opened the doors Labor Day weekend, 2014.” It was still just pork shoulders and ribs out of a small Cookshak smoker, but his first trip to Texas changed all that.

After eating the best of Texas barbecue at places like Franklin Barbecue in Austin and Louie Mueller in Taylor on his inaugural Texas trip in 2015, Ramirez came back to California with a new vision. He traded the cabinet smoker for a rotisserie, and Texas-style smoked brisket became his new obsession. Ramirez had eaten the best, so he knew his target, but he had to teach himself how to smoke a decent brisket. Texas pitmasters had been generous with their knowledge during his travels (he’s now been to the state a dozen times for barbecue research). Ramirez read all he could on brisket and watched instructional YouTube videos. Then he traded up yet again to a J&R Smokemaster smoker for more capacity. He’ll add another to the lineup soon to keep hot brisket coming out until closing. California customers aren’t used to the idea of selling out, but Ramirez has no plans to alter his motto of “no shortcuts, and no reheating.”

I visited early enough in the day to try some of everything, but it was still a few hours after the very early 9 a.m. opening time. My tray included a few thick slices of fatty, prime grade brisket with a stout bark of cracked black pepper. The meat was smoky, tender, and impressive for a guy who hadn’t bothered with brisket until three years ago. The pork ribs were a little undercooked and the sausage was decent, but the surprise star of the day was the pulled pork. Ramirez coats Duroc pork shoulders heavily with salt and black pepper, then smokes them slowly until they pull apart easily. The meat is then pulled to order, rather than in big batches, making for incredibly moist pork. The flavor of the smoke and the pepper was expressed so vibrantly in the generous bits of bark clinging to the juicy strands of pork, I kept coming back to that corner of my tray.

The sides of beans, slaw, potato salad, and mac and cheese are all classic Texas dishes that don’t get any sort of California twist here. Ramirez saves the homage to his home state for his signature item, the “Meatman Burrito.” Don’t balk at the $22 price tag. It’s the easiest way to sample a good portion of the menu, and the thing has all the heft of a two-liter bottle of Dr Pepper. It begins with a giant flour tortilla, then comes the mac and cheese, beans, a whole link of sausage, sliced brisket, and pulled pork. Ramirez said they sell about 75 of them on a busy day. Business is good.

The writer's daughter tackling half of the Meatman Burrito.

Ramirez doesn’t miss the stress of running the illegal barbecue operation, though he was too early to benefit from the press given to the burgeoning underground barbecue scene in Los Angeles. Selling barbecue without a permit used to be way to get enough cash to start a business, but now it’s being used as an edgy marketing technique. Ramirez doesn’t begrudge them, though. He said it would be hypocritical given how he started. Besides, Ramirez said, the underground barbecue joints are “beneficial … I’m very happy that they’re making everybody aware of Texas barbecue.” Unfortunately, he doesn’t see much of a future for those joints unless the regulations on offset smokers change in California. As Austin’s la Barbecue learned when they explored, then abandoned, plans for an L.A. expansion, there is no way to smoke meat in California the way many are used to in Texas with smokers fashioned from old propane tanks.

That isn’t stopping Ray’s BBQ from exploring other ways to deepen their Texas influence. A few days after I visited, Ramirez was posting photos of their new smoked sausage. It’s a house-made Texas “hot gut” sausage that looks so good I wished I’d planned my trip a week later. Maybe he’ll bring a few links next time he comes to Texas. He’s planning another trip as we speak.

Ramirez oozes more Texas pride than most Texans I know. There’s some reference to Texas on every surface in the restaurant, and it’s one of the few places in the area you can get a bottle of Big Red with your brisket. It’s also amazing to find great barbecue at a joint that has gone through menu changes and cooking styles as rapidly as Ray’s BBQ has. Like any good pitmaster, Ramirez understands that he still has some room to improve, but there’s no reason to assume he won’t. Like he told me, “The reason I’m so proud of it is because nobody taught me how to do it.” 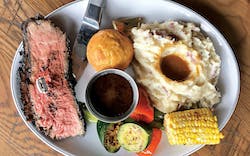 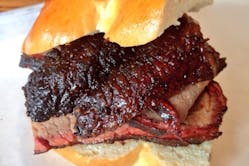