There’s no sign over the door—at least not for now—but somehow that doesn’t seem to matter. The Big Bib BBQ and its new attached event space anchor the corner of an aging strip center along Austin Highway in northeast San Antonio. It’s under construction, and the awnings are being replaced, but barbecue fans had no trouble finding it. Even on a Tuesday, lunch was hopping.

The line never seemed to ease up during the hour I was there, and service was brisk and friendly. The dining room is small, but it’s a big step up from their original space, which was housed in tiny storefront a half mile up the road. In the Big Bib’s new digs, there’s plenty of seating on a patio full of picnic tables, and diners sit in an area perfumed by the smokestacks of the adjacent pit room.

Back inside, clippings from the local paper line the wall. If you look at them closely, they read like a series of unsuccessful attempts to get the rub recipe from pitmaster Eugene Polk. “Get your rub on!” is Big Bib’s motto—and they do—but Polk isn’t talking. In an interview earlier this year, all he told the local paper was the he “added a little twang.” (My guess? Lemon pepper.) But no matter the ingredients, they pile their rub on. Your hands will be red with paprika after a few bites of the baby backs ribs, which are just tender enough to come away from the bone. I preferred them to the house specialty rib tips which were tough to chew. 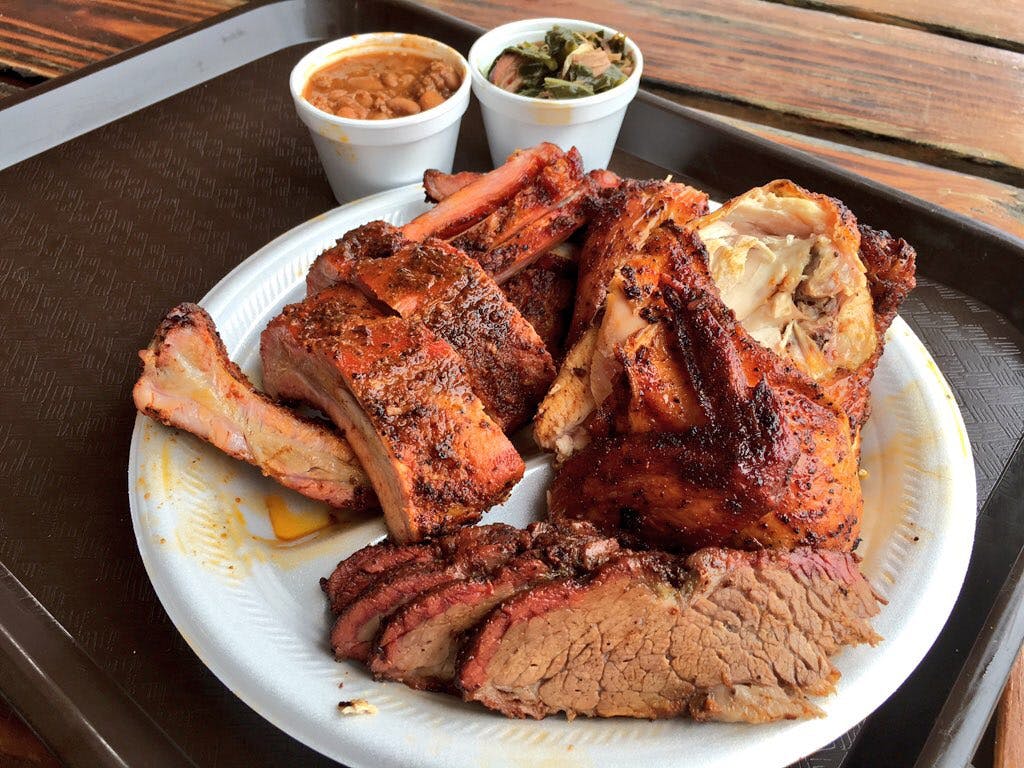 Sliced brisket gets the same heavy rub treatment. It’s tender and moist, but without much smoky flavor. It would work better as the supporting cast on one of their monster stuffed potatoes. The same goes for the pulled pork, which is really chopped. It goes well with the honey barbecue sauce, which is really a great, sweet sauce. A link of jalapeño sausage was a decent commercial link without much smoke. 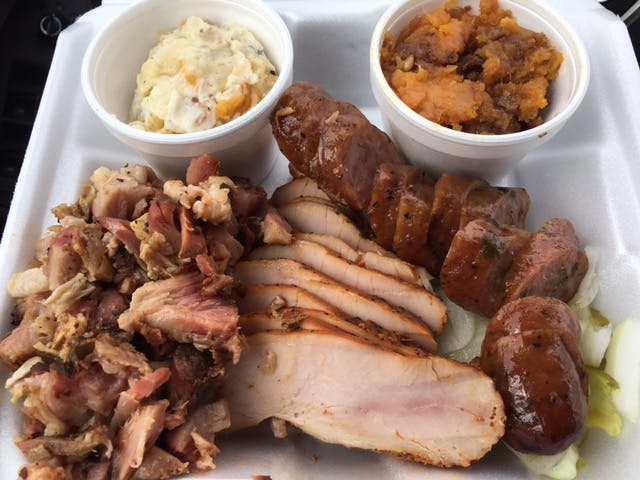 The poultry needs no adornment. Slices of turkey breast were juicy, flavorful, and tender. The chicken was even more impressive. I’m not sure how they’re making money on it since a half chicken came along as one of the options on my three-meat combo plate. This is where all that rub really shines, as it becomes one with the crisp skin. Even the white meat was juicy as I tried to keep myself from eating every morsel. It was not only the best value, but it was the best item on the menu.

A great variety of sides may give the chicken a run for its money. I went for the meaty chili beans and the greens which were flavored with bits of smoked pork. A warm baked potato casserole was a nice break from potato salad. They’re famous for the peach cobbler, which I missed, but a side of the decadent sweet potato casserole could just as well serve as dessert. Laced with nuts and brown sugar, it’ll satisfy your sweet tooth.

There’s no doubt that the Big Bib is a popular spot. It routinely wins reader polls for best barbecue in San Antonio, and I get more notes telling me to visit it than nearly anywhere else. While this visit was a huge improvement from my first stop three years back, I’m not leaning toward naming it San Antonio’s best. What you’ll get is flavorful barbecue, great sides, and the best smoked half chicken you can find in town.