Fred Fountaine is arguably Texas barbecue’s most influential pitmaster—and you’ve probably never heard of him. For forty years he cooked the barbecue at Louie Mueller Barbecue in Taylor, and during his tenure, he helped bring national acclaim to Texas barbecue.

Fountaine, who grew up in Massachussetts, lived in Rhode Island after he completed his service in World War II, but he left for Texas after a doctor ordered him to live in a warmer climate. He arrived in Taylor in 1946, and, according to Wayne Mueller, Louie’s grandson and current pitmaster at Louie Mueller, “Fred walked from the train station to Louie Mueller and asked for a job.” Fountaine started as a stock boy at Louie Mueller’s Complete Grocery, but he encountered trial by fire, so to speak, the day two cooks working the pits both quit. Louie didn’t know the first thing about smoking meats, and as Fred told the Milwaukee Journal in 1984, “Mueller just said, “That’s the barbecue pit.’ I didn’t know how to do it, but I stayed, I learned, and I built up the business.”

By the mid-eighties, Fred and Louie Mueller Barbecue had been written about by The Atlantic Monthly, Texas Monthly (several times), and the New York Times. The Times’ food critic Mimi Sheraton called it “an essential stop on any barbecue tour,” in 1978. She praised the smoked beef and the “sheer russet sauce.” That thin sauce, very similar to what you’d find at Louie Mueller Barbecue today, was almost as famous as Fred. In March of 1975, the Atlantic Monthly called the sauce “a masterwork twenty years in the making.”

1 quart (32 ounces) catsup
3 quarts water
2 onions the size of baseballs, cut up fine (use 1 ½ if they are the size of softballs)
2 beef bullion cubes
2 tablespoons salt, or to taste
¼ cup black pepper, or to taste

In large pan, combine all ingredients, going gently with salt and pepper first.

Bring to boil over high heat and boil vigorously 40 minutes. Reduce heat to low, tast and correct seasonings, and let simmer 40 minutes longer. At end, increase heat to medium-high and bring to a boil again. Then it’s done. Bottle in clean bottle or jars and store in refrigerator. Makes about two quarts.

* As originally printed in the October 24, 1984 Milwaukee Journal

If the sauce was praised, Fountaine’s briskets were exalted. In 1981, Texas Monthly’s own Paul Burka wrote that nothing he has ever seen “can approach the ecstasy of seeing thirty briskets bubbling in their own juices under the direction of Fred Fountaine at Louie Mueller Barbecue in Taylor.” But Fred was reluctant to cook brisket when he first started. Louie Mueller asked him to move away from beef clod, but he was stubborn. “Grandpa told me Fred would intentionally under- and- over- cook the early briskets with the hopes grandpa would drop it,” recalls Wayne Mueller. Wayne’s brother, John, laughed, recalling, “Fred told him it would never sell.” Once he got the hang of it, not many could do it better. His technique of wrapping the beef in butcher paper to keep it moist was seen as innovative, and it’s that same technique that Aaron Franklin employs on his famously tender beef. 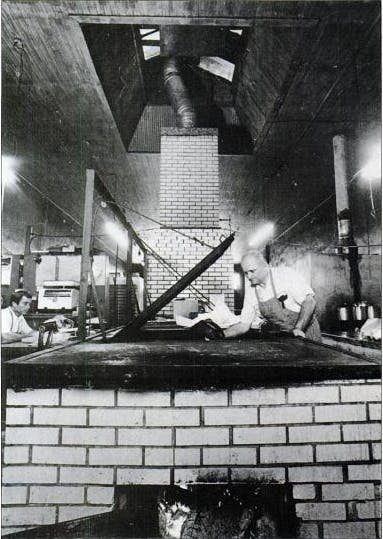 Between the sauce and the beef, Fred bona fides made him a bit of a celebrity. In 1985, he told the AP, “I can’t go anywhere in Texas that somebody doesn’t know me.” Even as early as 1964, folks in town referred to Louie Mueller as “Fred’s place.” Famous Texas food historian and writer Frank X. Tolbert shared his frustration in finding the place for the first time since there wasn’t a sign that mentioned Fred anywhere, but everyone he talked to told him to go to Fred’s: “The sign says Louie Miller’s [sic], but in Taylor this is usually called Fred’s, in honor of the manager and barbecue chef, Fred Fountaine.” In other articles they called him a “a virtuoso at barbecuing briskets “ and a “barbecue artist.” Along with fellow locals Vencil Mares and Rudy Mikeska, he was a celebrity judge at the Taylor International Barbecue Cook-off in 1982.

Part of his living legacy was that he only cooked with wood—a barbecue tradition that journalists of the time were certain would die with him. Alison Cook wrote in Texas Monthly in December, 1983, that “Fred Fountaine will retire from his hallowed barbecue pit at Louie Mueller’s in four years or so, but it’s a safe bet that hordes of greaseless, preppy County Lines will spring up to take his place.” The Rotarian magazine also weighed in, hypothesizing that “late night television may yet be the downfall of barbecue.” There wasn’t much hope for the future generation of barbecue cooks.

Bobby Mueller, Louie’s son, joined the ranks at the barbecue joint with Fred in 1974. Bobby had worked as a butcher, and didn’t know much about barbecue, but he started working with Fred to learn the craft. In the beginning there was tension; Fred feared Bobby was treading on his turf. “He may have felt put aside or upstaged,” was the observation of Wayne Mueller, but the two men eventually put egos aside, and like a good running back tandem, they understood that a genial partnership meant mutual longevity. “It worked for both of them,” Wayne said. “Both of them knew how to cook, so it gave each of them more time off. They knew they needed each other.”

During that time off, Fred played dominoes and was a member of the Taylor Merchants bowling league where he once bowled a 300 game. A recipient of the Purple Heart and the Bronze Star for his service in WWII, he remained active in the local American Legion Post 39. He was also a thoughtful man, former Texas Monthly editor Griffin Smith Jr. recalled. They weren’t exactly close, but when Smith fell ill in 1972, he received a hand-written note: “Sorry to hear you were ill. Hope you will be feeling better soon. Good luck. – Fred Fountaine”

Both Wayne and John remember Fred fondly too. The brothers worked with Fred at the barbecue joint, and when they were young, they wiped down tables and trays. Wayne described him as “a Claymation caricature. Everything about him seemed exaggerated. He had these stick legs and an oversized belly. He had a bald head with a big, big nose. His personality would jump out at you.” Everyone I spoke with remembered his large, grease-covered hands. He was prone to giving hearty handshakes, almost oblivious to the brisket grease he left behind. 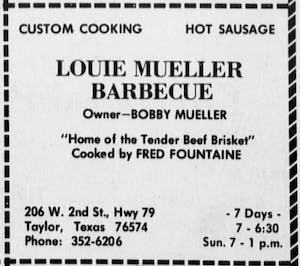 But Fred was mostly passionate about good barbecue, and cooking it the way he deemed right and authentic: over wood.  When Burka wrote about Fred in 1981, Burka fretted that Fred’s successor might not follow in that tradition. Knowing what we do now about the Mueller family’s toehold in Texas’s barbecue culture, it’s almost comical to read Burka’s thinly-veiled prophecy from way back then: “Back at the café, I asked Bobby whether he shared Fred’s antipathy for gas. ‘Not really,’ he said. ‘I can’t taste it. Besides, I don’t eat much barbecue myself.’” (Thankfully it has never come to that.)

For Fred Fountaine, the ending was as abrupt as it was tragic. Wayne recalled a confrontation between Louie and Fred. Louie accused Fred of giving some food away to customers. These accusations, true or not, might have been too much to take for the man who considered Louie a father figure. As John Mueller remembers: “My dad came into work one day and there was a note on his desk that said [Fred] had had enough, and he quit.” It was 1987 and Fred was one year shy of his fortieth anniversary as the pitmaster at Louie Mueller Barbecue.

Fred Fountaine wasn’t quite done with barbecue. He went the next town over to Hutto to cook at another barbecue joint. It didn’t last long, and Fred was out of barbecue until his death ten years later at the VA Hospital in Temple. In his time he was the king of Texas barbecue and cemented the position of Louie Mueller Barbecue was one of the greats. A year after he was gone, the New York Times included Louie Mueller in a list of must-visit food destinations. They talked up the barbecue, but urged readers not to leave without “a cup of chef Bobby Mueller’s special sauce…” It took Fred twenty years to perfect that sauce recipe and 39 years to build his legacy, but just a year after his departure, his named had drifted away like so much oak smoke.