This quarterly newsletter was sent exclusively to TM BBQ Club members on December 15, 2020 from barbecue editor Daniel Vaughn. The next newsletter will be sent out in March of 2021.

I’ve been spending some time around Lake Texoma, up on the border with Oklahoma, and exploring the barbecue options in the area. In Sherman and Denison, that’s going to include plenty of brown gravy sauce, a regional specialty. Gravy with barbecue? I know, it sounds odd, but it’s not really the gravy you’d serve with mashed potatoes. It starts with brisket drippings that are thickened with flour or cornstarch, then spiced up like a barbecue sauce. The original recipe is credited to Po Sam’s BBQ of Colbert, Oklahoma, which closed long ago, but most of the joints serving it now are in Texas. Fine BBQ in Sherman and Bear’s Smokin’ BBQ in Denison are two barbecue trucks keeping the tradition alive, but the best version I’ve found is at Denison’s Hickory House BBQ, which has been serving it for 45 years. Try it on a chopped brisket sandwich with raw onion. – Daniel Vaughn, Barbecue Editor

Brown gray sauce is a regional barbecue specialty around the Texoma area that originated in Oklahoma. This spicy version made w/ brisket drippings at Fine BBQ in Sherman, TX is one of the finest I’ve had. pic.twitter.com/Aha7pHx8OK

Whether you’re a longtime member or new to the ’cue, here’s the latest and greatest from TM BBQ Club.

Tip of the Month

“Smoke-A-Holics BBQ has some great barbecue Wednesday through Saturday in Fort Worth, but the regular menu isn’t available on Tuesdays. That’s when they smoke up giant turkey legs and serve them stuffed with a variety of options like shrimp and grits and dirty rice, but you’ve got to visit on Tuesday to try this new specialty.” – D.V.

There has never been a better time to start a new tradition. Looking to make some changes to your holiday menu this year? Check out these festive recipes by Daniel Vaughn.

From all of us at Texas Monthly, we hope you have a safe holiday season and we’re so excited to share more barbecue greatness with you in the new year.

Have a question? Check the FAQ on our site or email us at [email protected]. 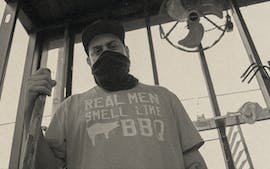