Since delving into a Bubba Tater from Pappas Bar-B-Q in Dallas, I’ve been eating a lot more baked potatoes than normal. It’s been a search for some of the best and most outrageous stuffed potatoes. This is by no means a complete list of the best potatoes in the state, and it skews toward East and North Texas where the barbecue-stuffed potato has a higher degree of popularity.

These aren’t your average Bubba Taters. Butter, cheese, and chopped barbecue is only the beginning. These versions use a humble potato to make barbecue art, but it does start with a good potato. No matter how your gussy up a hard, undercooked spud, or an old and gummy one, a bad foundation makes any Bubba Tater a meal of drudgery.

I must admit that when sampling menus across the state, the barbecue potato isn’t usually a top priority. Beyond a few bites, it would be wasted if I was alone on a barbecue road trip. After enjoying several, it struck me how odd the combination of ingredients is on one of these Bubba Taters. Where else is sour cream considered a topping for brisket? It’s hard enough just to find cheese offered on a chopped beef sandwich (like the Brother-In-Law at Stanley’s in Tyler). But I think we can all get behind the addition of bacon bits, as long as they come from a pig and not a jar.

Backyard BBQ – This is one of the few with the given name “Bubba Tater” on the menu. It’s a great baked potato, and it needs to be. There’s a flourish in the plating, but it consists of the most basic materials for a barbecue-stuffed potato. The chopped brisket is smoky and saucy, and the sauce isn’t too sweet. It’s a classic version of the genre. 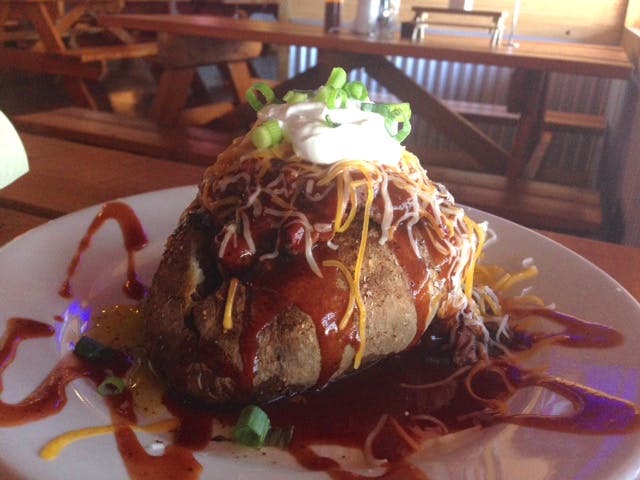 Cooper’s Old Time Pit Bar-B-Q – You’ve got to build your own tater at Cooper’s (see top image for components). They get a bonus for free beans as a topping along with plenty of real bacon bits. Coating the skin with salt and pepper is also a nice touch, but mine was so salty I couldn’t eat the skin. Not good for those looking to get their vitamins. 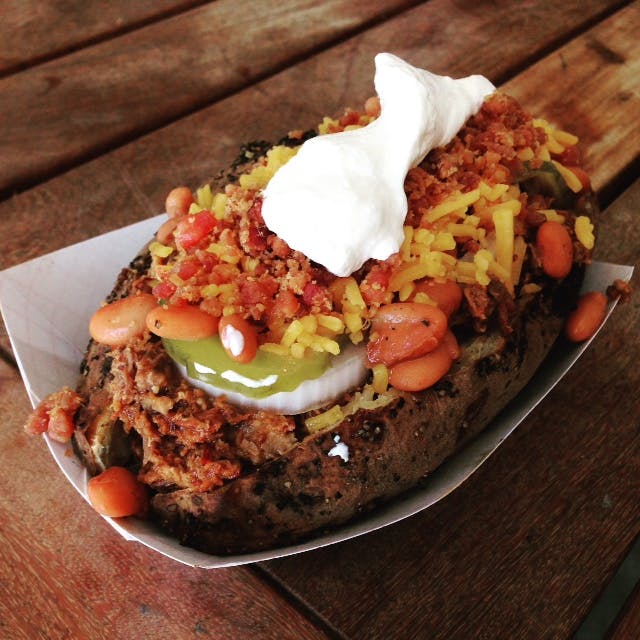 Jambo’s BBQ Shack – A container otherwise used for whole roasted chickens is required to hold “The Sadie.” It weighs a few pounds, and comes with sausage, brisket, and beans. It’s the biggest potato I’ve found, and also the best value at just $7. 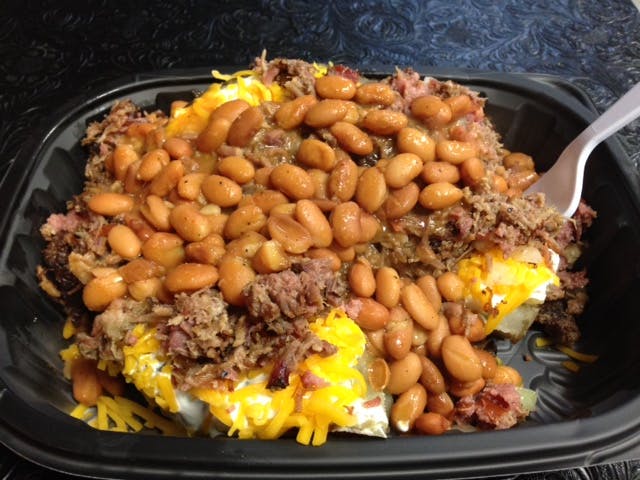 Mac’s Bar-B-Que – So it’s not technically a barbecue-stuffed potato since the barbecue doesn’t go in it. Rather, it’s a potato loaded with butter, sour cream, shredded cheese, a generous serving of chopped bacon, and green onions. Once plated, the whole thing is gilded with a necklace of pork ribs, which is why they call it “The Horseshoe.” 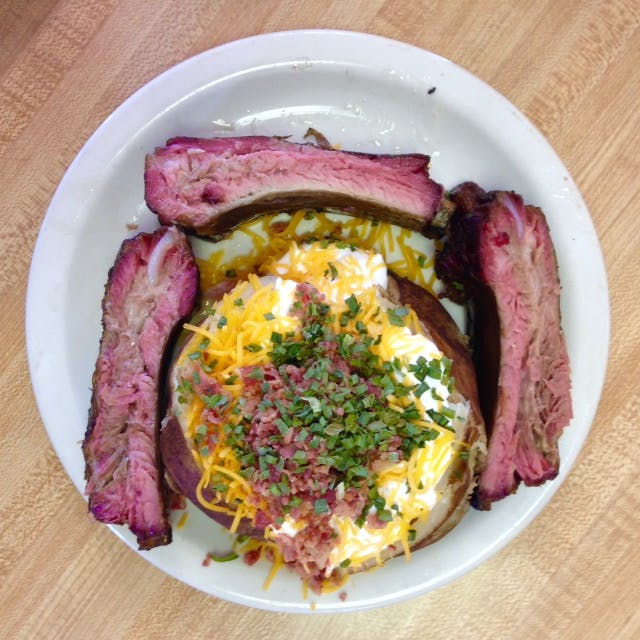 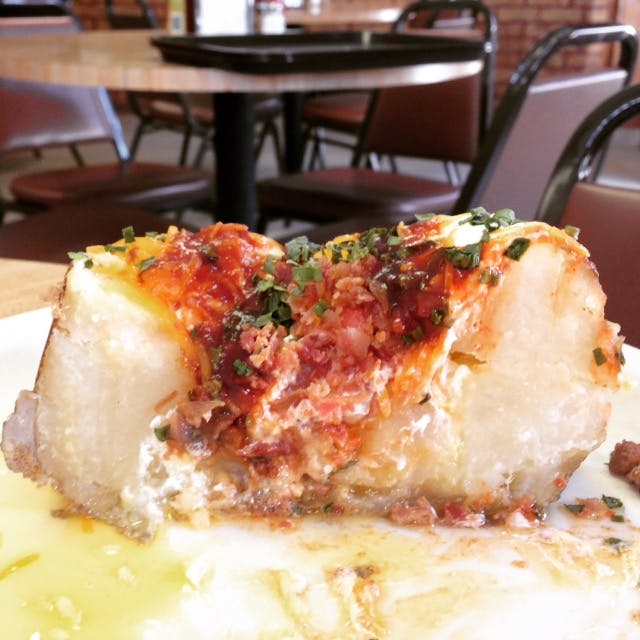 Miller’s Smokehouse – This was a special combination built for Barbecue Week back in July, but owner Dirk Miller said it might find its way onto the menu. It’s like a mini-buffet served atop a barely visible sweet potato. There’s chopped brisket, sliced brisket, and two kinds of sausage along with a cool avocado half. 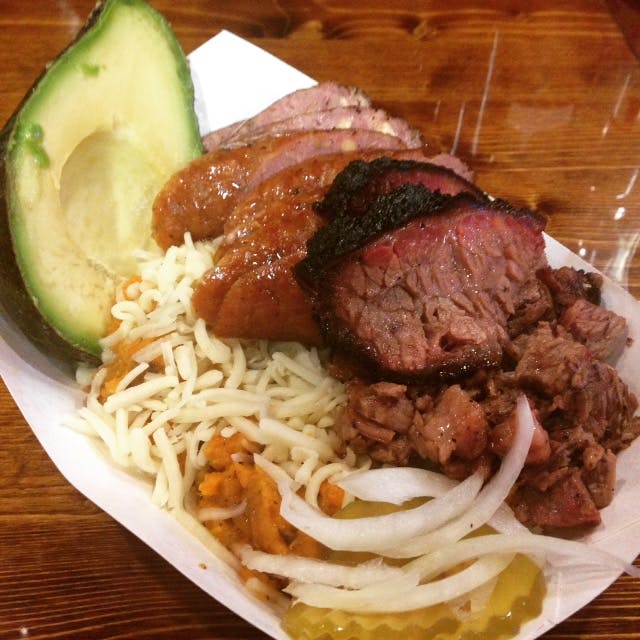 Off the Bone – Like at Mac’s in Dallas, they call this “The Horseshoe.” Unlike Mac’s this potato gets a large scoop of smoky chopped brisket. This potato was tender and creamy, making it the best of the spuds. Those ribs surrounding it are also some of the best you can find in D/FW. 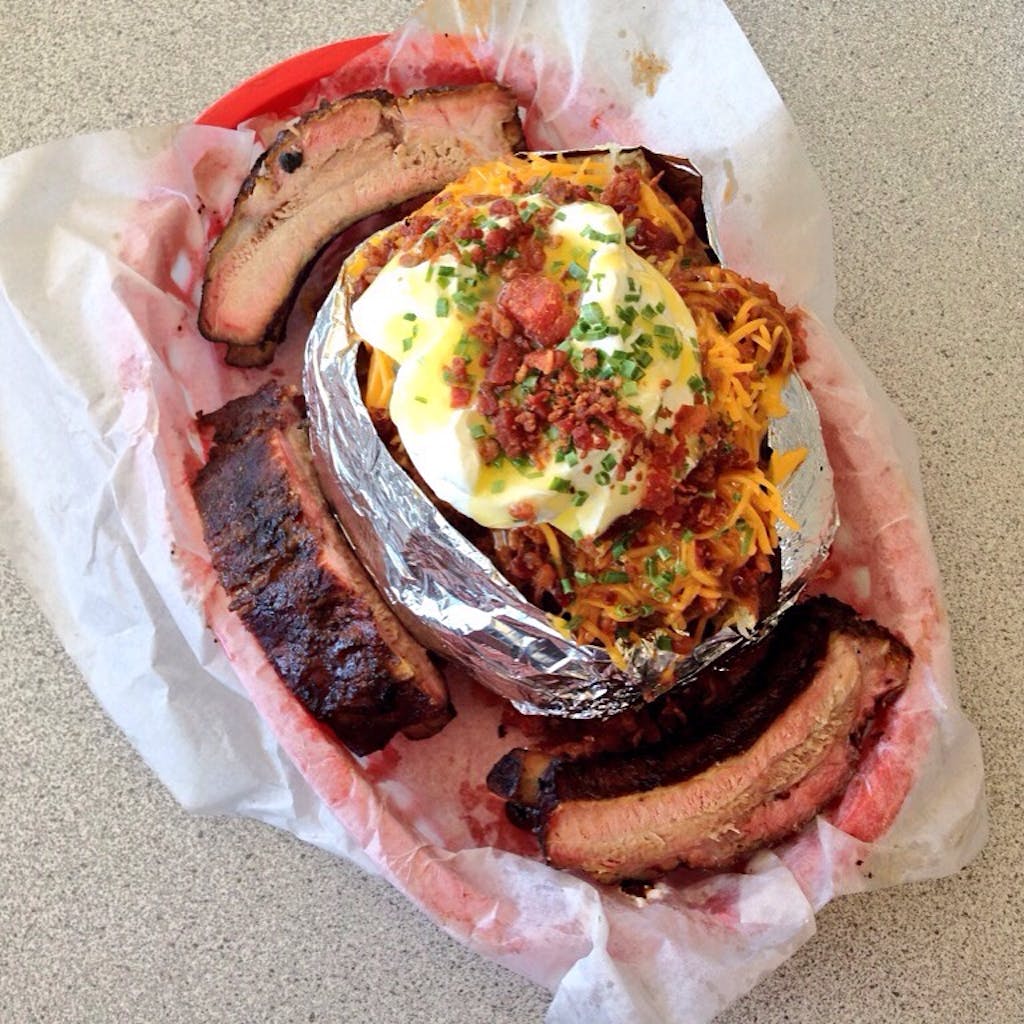 Pecan Lodge – This famous sweet potato is known as the “Hot Mess.” The brisket is braised with chiles and spices, and the result is basically chili con carne. That is placed into a salt-baked sweet potato along with a cream sauce, cheese, bacon, and green onions. It’s so meaty, it easily serves two. 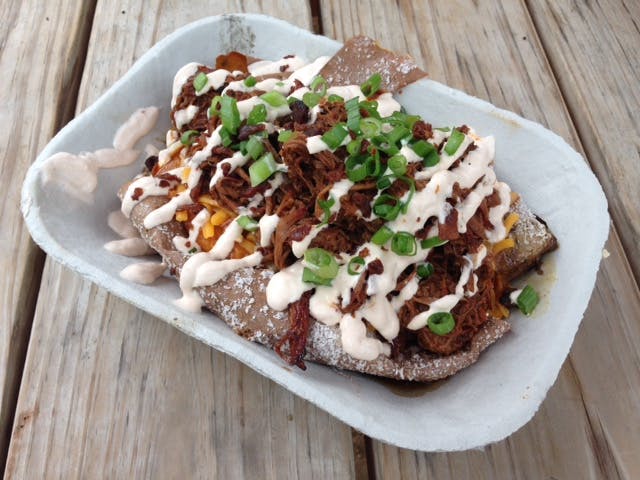 Southern Q BBQ – They call it the “Big Poppa,” and it’s a sight to behold. Owner and pitmaster Steve Garner picks through forty pound boxes of russets to find the biggest and use them for the Big Poppa. It’s topped with sausage, brisket, and pork ribs to make it a three-meat tater, and I swear there’s a potato under there. 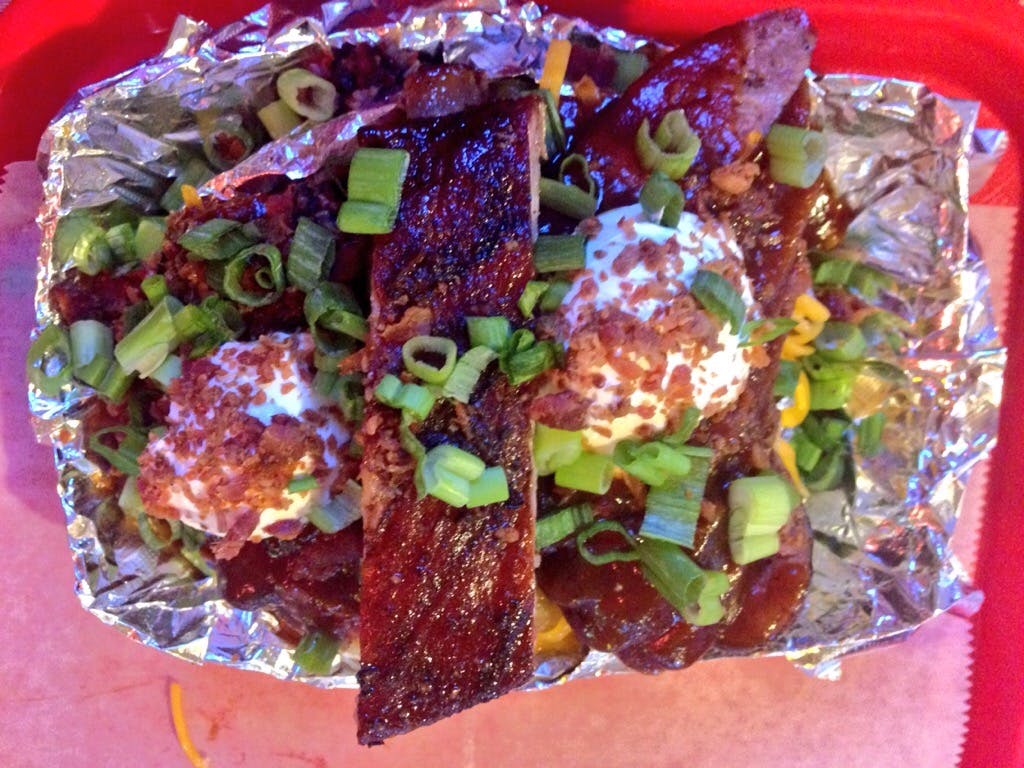 Woodshed Smokehouse – While bacon is a common component on these stuffed potatoes, you don’t often find large chunks of bacon lardons. It’s a smallish potato, but plenty for one, and it is smoked rather than baked. A layer of good cheddar is melted over top the buttered potato, and for a five dollars more you can add a quarter pound of meat. I chose brisket which just seemed natural. 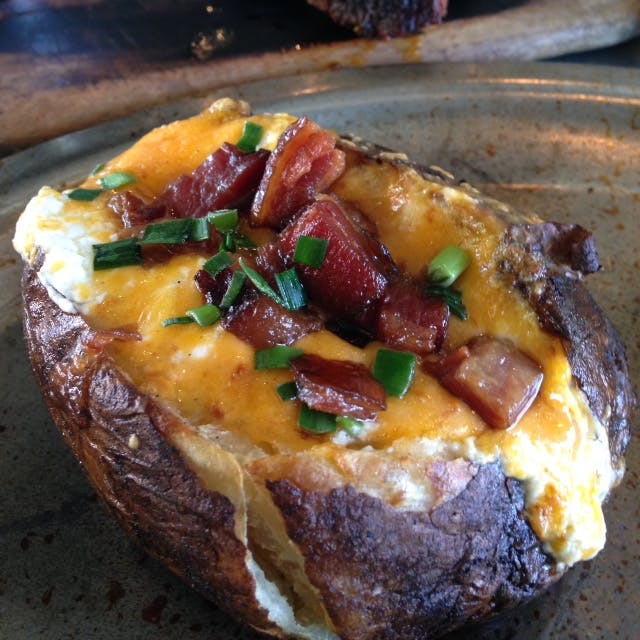 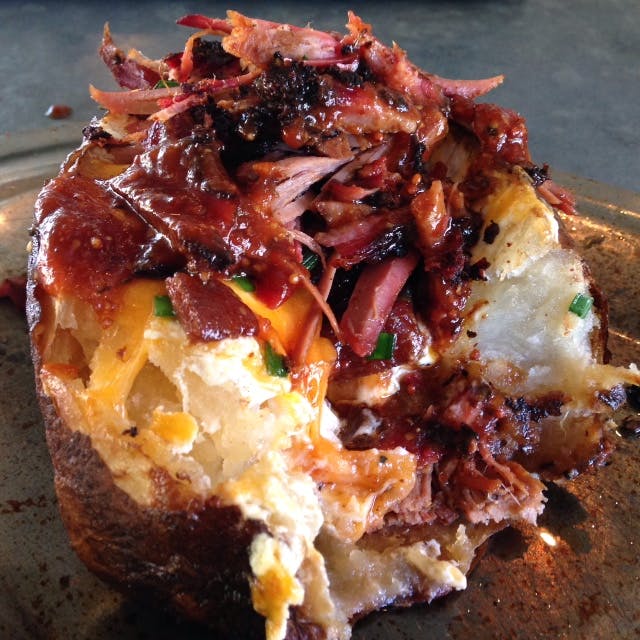 This is only a start, and I’d like to continue building this list. Please point me to your suggestions for ridiculous barbecue-stuffed potatoes.