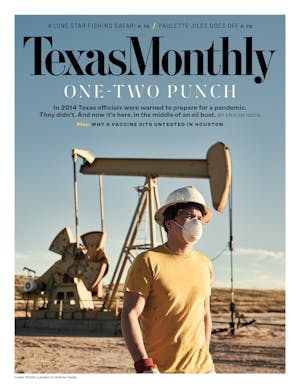 Q: I have lived in Texas all my life and I have a special affinity for Texas history, particularly the history of the Texas Revolution. The stories of those brave settlers who risked their lives for the cause of liberty against tyrannical oppression is the stuff of legends. A few years ago there was a musical on Broadway called Hamilton, which gave a dramatized account of the life of American founding father Alexander Hamilton in an unforgettable (if historically questionable) way. In my opinion, the history of the Texas Revolution is at least equal in terms of spectacle and excitement. Would not a stage musical based on the Texas Revolution, starring the likes of Stephen F. Austin, Sam Houston, William Travis, James Fannin, Davy Crockett, and Ben Milam be an excellent endeavor?

A: The Texanist, admittedly not a regular theatergoer, had the pleasure of attending a performance of Hamilton that was put on by the touring cast last summer in Austin and found it to be an altogether marvelous experience. He really enjoyed it. Bravo to talented playwright and composer and singer and dancer and actor and overachiever Lin-Manuel Miranda, whose Pulitzer Prize, Grammy Awards, and record number of Tony Awards, plus all the additional awards and accolades and buckets of money and movie deals that have come his way, were well deserved. The Texanist still can’t get some of the show’s catchier tunes out of his head. “I’m not throwing away my shot …”

It’s probably no surprise, but the Texanist concurs with your assessment that the Texas Revolution and its preceding and subsequent events, what with all the action, the drama, and the cast of outsized characters, would make excellent subject matter for a stage musical. Theatrical performance in Texas goes way, way back. All the way back, in fact, to the sixteenth century, when Spanish colonists put on shows near El Paso in the year 1598. And English-language theater has been documented in Texas as early as 1836. In 1838, the year-old community of Houston is said to have had two theaters before the town’s first church had even been built.

As good as your idea is, however, you are not the first person to be struck by the notion of making Texas history the subject of a musical. The Handbook of Texas’s section on theater tells of several plays about the Texas Revolution having been written during the early statehood period, including one titled The Storming of the Alamo. Additionally, Texas has, since Governor Bill Clements signed Senate Bill 93 into law in 1979, not one, not two, not three, but four official state plays. And each one is an outdoor musical drama with some aspect of Texas history as its focus.

The Fort Griffin Fandangle (1937), which is the oldest of the quartet, is put on annually in Albany and tells of the history of the settlement of the area along the Clear Fork of the Brazos River near Fort Griffin, a frontier outpost. Texas (1966), perhaps the best known of the foursome, is staged beneath a stunning six-hundred-foot-tall cliff at the beautiful Pioneer Auditorium amphitheater in Palo Duro Canyon State Park each summer from June to the middle of August. Texas bills itself as a “musical romance of Texas Panhandle history.” Beyond the Sundown (1975), which delves into the Alabama and Coushatta Indian tribes’ fraught decision of who to throw their support behind when the battle for Texas independence got under way, was staged at the Sundown amphitheater on the Alabama–Coushatta Tribe of Texas’s reservation, in East Texas. And The Lone Star (1977), which was commissioned by BOI Galveston philanthropist Mary Moody Northen and staged at her namesake amphitheater in Galveston Island State Park, also focused on big events of the Texas Revolution.

Additionally, the Texanist can think of A Cloud of Witnesses: The Drama of the Alamo, a less varnished historical drama staged at the Mission San Jose Outdoor Theater in the late fifties and early sixties; Viva! El Paso, which covers some four hundred years of El Paso history on the stage of McKelligon Canyon amphitheater; All the Way, a recent Tony Award winner about Lyndon Johnson that starred Bryan Cranston; and The Best Little Whorehouse in Texas, by the Texanist’s late friend and former Texas Monthly contributor Larry L. King.

Sadly, Beyond the Sundown seems to have had its last performance in 1983 and The Lone Star appears to have been back-burnered since 1990, leaving only the Fandangle and Texas in regular production. So, with only two of Texas’s four official state plays still being put on, perhaps the time is right for a sweeping musical spectacular set amongst the dramatic doings of the Texas Revolution. Your idea, while not completely original, is a fantastic one and the Texanist is all for it. One can just imagine the many classic songs from the production that will live forever in the American standards repertoire: “Don’t Cry For Me, Matamoros,” “Santa Anna, Get Your Gun,” “I Feel Pretty … Sure That We’re Badly Outnumbered,” “And I Am Telling You I’m Not Going to Cross That Line in the Sand,” and, of course, that crowd-rousing, electrifying showstopper “Hello, Davy.”

Who’s going to write those songs, though? The Texanist would offer to collaborate with you, but he is currently busy thinking about Texas Monthly: The Musical, an idea hatched by his colleague and across-the-hall office neighbor, executive editor Michael Hall. The magazine’s fiftieth anniversary, which occurs in just three short years, is right around the corner and there’s a riveting, melody-filled drama about the travails of a spunky group of writers, editors, and advertising salespeople that has to be flawlessly composed and cast and choreographed between now and then. The Texanist hears that those Broadway producers have pretty high standards, Consumer Reports: The Musical notwithstanding.

But, hey, the Texanist did just notice that auditions for Texas are taking place later this month in Canyon. Perhaps this could be an opportunity for you, Mr. McClellan, to not throw away your own shot—at Texas-themed historical musical drama fame.

Thanks for the letter, stay in touch, and break a leg.