At the forefront of every movement is a leader, and if there is one person that has taken the reins to guide the Austin food trailer movement in the right direction that individual is Eric Silverstein – owner of The Peached Tortilla and Yumé Burger. Silverstein has been a vocally passionate critic of the Austin trailer scene in an effort to evolve its refinement and creativity as the movement progresses. After a year’s worth of hard work, Silverstein recently announced the launch of a new Austin culinary event, Trailer Food Tuesdays. Silverstein, Kristen Stacy of The Seedling Truck and Royal Fig Catering, and Tiffany Harelik of Trailer Food Diaries have combined forces to launch a monthly food trailer event in Austin. On the last Tuesday of every month from July 31- Nov. 27,  ten food trucks and trailers will gather on the lawn of the Long Center to serve the city. Details of the event are still being pieced together, but Silverstein took some time to talk with TEXAS MONTHLY about the new event, his qualms with the Austin trailer scene, and where he envisions Trailer Food Tuesdays going in the years to come. How did you come up with this idea? It’s something I’ve been trying to do for a year now. I hadn’t been able to find anyone to help me with the project. It’s funny, trailers are always willing to participant, but it’s hard to find the people to do the legwork. Kristen from Royal Fig approached me and asked if I wanted to move forward with this idea and we started putting some ideas together for something on the East Side, but that fell through. We brought in Tiffany [of the Trailer Diaries] because she was instrumental in bringing Gypsy Picnic to Austin and I have a lot of respect for her. We’d always kicked around the idea of doing something, but when Tiffany came in we had enough pieces of the puzzle to officially do something. It’s always been my opinion that something like this should take place every month in Austin, and Gypsy Picnic only happens once a year. 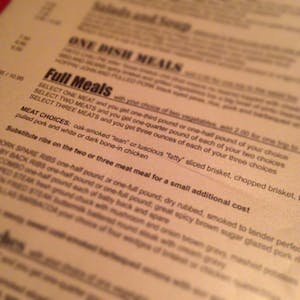 Is this something you’ve seen in other cities? I totally pulled it from other cities. It’s huge in Los Angeles. I think the reason we haven’t seen more of this in Austin is because we’re so trailer-heavy. People don’t like to move those a lot, and LA is really truck-heavy. San Francisco has Off The Grid. Vegas has Vegas StrEATS. Even Atlanta has meetups. It seemed absurd to me that we hadn’t done this already in Austin. It doesn’t make sense. Are we that discombobulated as an industry? I think we need to get our stuff together, so I realized [Kristen, Tiffany, and I] would have to take the bull by the horns and get this going. You’ve been vocal about how the food trailer scene in Austin needs to step up its game. Tell me why you think that is. It’s a few things. One, I’ve been in the business for two years now and I know how these trailers operate. Only a handful of them operate like a real business. All this national media attention goes to the Austin trailer scene, and sometimes there can be a little bit of a letdown when it comes down to it. The barrier to entry in this business is so low that anybody can get in, and so that means that hobbyists are also getting involved. What you’re getting is a lot of people who aren’t serious about it, and it’s tarnishing the names of the ones in the business who really do want to make a name for themselves and treat it as a real business, and I think that ends up hurting overall sales. I’m not going to say that you have a responsibility to treat your trailer like a real business; you can run it however you want. But, if other trailers don’t keep their hours, don’t put out a great product, and don’t follow the rules, then it’s going to hurt the industry as a whole. And for some reason in Austin we’re a little more adversarial than we are collaborative. We don’t join forces enough. Why aren’t there food-truck meetups? Why don’t they exist? Why do we only see great events in San Francisco and LA and Atlanta. They’re bigger cities, yes, but we’re capable of doing it just as well. Why should places like Vegas have a better food scene than Austin? How did you choose what trailers were going to be a part of this event? I initially signed up people I knew, simply because we were pushing it so close to the deadline to get the ball rolling. We wanted a variety of food represented, so that’s how we got our first batch of ten trailers. We have Korean tacos. We have farm-to-table food. We have Moroccan. We have Southern food. Coolhaus. Hey Cupcake!. Artisan hot dogs. We really wanted to provide variety. Would you ever have trailers from other cities come in for this? Yeah, I think that would be really cool. I know Dallas does that. Dallas and Houston do a lot of that, in fact. I don’t know if this venue could support a ton more trailers – if any at all actually. I think we are maxed out at ten, but the demand will determine how we proceed. Is it going to be ten different trailers each time? That’s something we have to figure out. There is already a waiting list of fifteen. I think demand is going to be dictated by how successful we are initially. I think we’ll have to do rotations though. I don’t want the event to get stale. Is this event something you want to continue in the years to come? We have a lot of room to grow in terms of education and evolving the palates in Austin, and I feel like events like this can continue that growth. There’s a need for this, and I want this event to succeed and I hope that it will. I think once these few months go by we’ll be able to know whether or not this is something we can continue in the future. I’ve put a lot of time and effort in this, and I just want to bring something to the table in Austin that I feel should have been there already.