In late July, Erin McKool opened a drive-through restaurant in Dallas called Start. For years, McKool had planned to open her own restaurant, but was never sure of what concept she wanted to undertake. Two-and-a-half years ago when the idea for Start finally came to fruition, McKool knew she had something spectacular on her hands. Start is a restaurant that is truly the first of its kind: a drive-through, slow food restaurant that utilizes local, healthy ingredients. McKool talked with TEXAS MONTHLY about Start, the Dallas culinary scene, and embracing an entirely new restaurant concept.

Tell me how the idea for Start came about.  I used to be a lawyer, and when I came home to raise my son, I started thinking about finally doing a restaurant. It’s been a dream of mine to start a restaurant, café, coffee shop, or diner for years. I’ve always wanted to own my own business. When I left my job in 2007, I had a concept in mind, but it wasn’t this one. This concept has been two-and-a-half years in the making. I decided to do a drive-through that served restaurant-quality food with healthy ingredients. How did the drive-through aspect come about?   From the minute I started thinking about this concept, I knew I had to have a drive-through because it would set it apart from everything else that’s already out there. That was the real reason why [I decided on the drive-through]. I wanted it to stand out. I know how difficult it is when you have kids or you’re on your way to work to stop and grab healthy food. I wanted to create something that would make it convenient for people to eat healthy on the go. Something like this needs to exist. 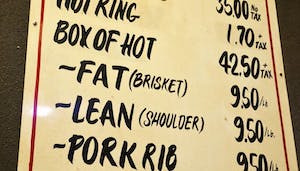 How did you develop the menu? Were these dishes you made at home? Things that you ate growing up?  It’s mostly stuff that I tested and made at home. There are a couple of things I added for the sake of building up the menu. I put together a menu that I thought would be really accessible to most palates. These are things that people are already looking for on a fast-food menu, but with a healthier twist. For example, we have a hamburger, but it’s not your typical hamburger. It’s one-hundred percent grass-fed beef that’s local and sustainable, and our wheat bun has no preservatives. I wanted to create a menu of items that I would make at my house. A couple of things I created that I had never made before were the flourless chocolate cake and the veggie, egg white sandwich. I put some curry butter on the sandwich to give it a bit of a flavor profile. I just played with some things on the menu and incorporated some adventure in the items. Is it all local, mostly local?   There are a lot of local ingredients, but it’s definitely not all local. For one, we don’t run a seasonal menu. We’re not truly a farm-to-table restaurant because we wanted to create a menu that wouldn’t change since we’re trying to follow the fast-food format as much as possible. We’re just reinventing it a little. Explain the meaning of the restaurant’s name.  This concept doesn’t really exist anywhere else, so we felt like it was truly a start. We wanted to be the first people that started thinking about remodeling traditional fast food. We wanted to persuade people to start thinking about eating better and also about where their food comes from. It’s a start in the right direction. What’s your opinion of the Dallas culinary scene?  People here have a very sophisticated palate. My husband and I lived in New York part time for the last three-and-a-half years. We’d spend two weeks there and two weeks [in Dallas]. I was stunned to see how similar Dallas is to New York, obviously on a smaller scale. That same New York-style food is here in so many restaurants. People in Dallas really appreciate the farm-to-table concept, sourcing local, and eating well.