As the chef and owner of Dai Due Supper Club, Jesse Griffiths is one of Austin’s most respected locavore chefs. Since founding Dai Due in 2006, Griffiths has taken his seasonal supper club and grown it into an online butcher shop with a retail, pop-up shop at the Sustainable Food Center’s Downtown Farmers Market.

Over the past three years, Griffiths and photographer Jody Horton have been working closely together to produce their first book, Afield: A Chef’s Guide to Preparing and Cooking Wild Game and Fish. Yes, it’s a cookbook, but more specifically, it’s an impeccably written, extensively photographed manual that takes people through the hunting process from land, lake, and sea and right back into the home kitchen.

Griffiths talked with Texas Monthly about Afield, working with Jody, the beauty of failed hunts, and a brick-and-mortar Dai Due. 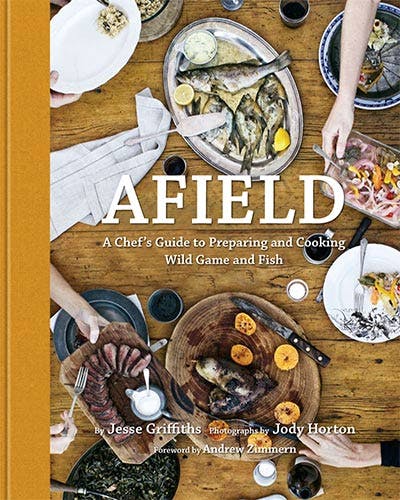 Layne Lynch: What made you decide it was time to write a book? More specifically, how did you want to approach it?

Jesse Griffiths: I met Jody [Horton] a few years ago and really admired his work. We got along really well, and I have a lot of respect for his genius. When we started the project, it started out as more of an amusement. I love to hunt and fish, but I never really get an opportunity to do it as much as I’d like. One trick I’ve learned through the years though is to make things you love to do a part of your everyday job. So, about three years ago, I decided we should do a book on hunting and fishing.

We went opening day of hunting season and used that as our starting point [for the book]. We wanted to document what I do every year in an outdoor setting. I don’t own a boat and I don’t have a lot of money, so I wanted to make it very approachable and cover it in a way that would be very beneficial to new hunters or people that have an interest in fishing. Also, I wanted to present fish and animals that were most accessible in our region like doves, flounder, and fish in creeks and bays. Nothing that you’re going to pay $1,000 to go on a charter to catch.

We included a lot of photographs in the book as well. From the beginning, I wanted the book to be a book of photography, and I was insistent that Jody be represented on the cover as author and photographer. We were able to get 350 photographs in the book, which made me really proud. The recipes are also really approachable for our region, so you’ll see a lot of tacos, creole, as well as comfort food like pot pies, dumplings, fried fish, and a lot of grilled and smoked things. I wanted to empower people to get out there and feel good about getting their own food.

LL: Where did you travel to in Texas to write the book?

JG: I went everywhere I would normally go. I hunt ducks really close to Austin. I have a spot that I will not share with anyone, and most of the ducks in the book came from there. The duck hunt featured in the book, though, was actually at the spot where I go every year, the Rice Prairie out at Eagle Lake, which is  a famous duck hunting area. Most of the fresh-water fishing was done on my home lake. I spend a lot of my time up there every spring. We went to the coast near Port Aransas to do the salt-water fishing. Everything in the book is very natural and representative of what I would do every year, except I had a photographer with me.

LL: What were some of the experiences of putting this book together? Were there any comical incidences that came along with having a photographer with you?

JG: It’s funny because if Jody was going to shoot another cookbook it would probably be something like, “Here are the favorite recipes of this chef,” and that chef probably orders his food from a purveyor, the food comes in, he cooks it, and then Jody comes in to shoot it. Our book wasn’t like that. We were dealing with animals that may or may not show up. We had those days where we would drive four hours, sit in a blind for two days, and not see one deer.

One day we were down in the blind, and it was this one-person blind but there were two of us in there because Jody is taking the pictures. He is sitting on my left, and we’re expecting a deer to come on my left. We decided he would just lean back so I could take the shot over his lap, if that were to happen. All of a sudden, a deer walks out about fifteen yards to my right. You can imagine you’re sitting in a blind and the window is at your elbows. I’m right-handed, so I couldn’t actually take a shot at the deer. This was our second season of trying to get a deer hunt on film, and I had a deer walk out literally at hunting range, and I can’t shoot it because we’re jammed into this blind together. We ended up not getting the deer. We spent a whole weekend out there and didn’t get anything. It was terrible.

In the book, we combine the deer and turkey chapter because we went out to this farm in Wimberley to shoot and this amazing thing happened. When we went got out there, we thought it was going to be a terrible day because the wind was blowing so hard, but almost immediately I shot two turkeys within a couple seconds of each other, so we got some awesome shots of that happening. [After that,] we decided to walk up to the top of this mountain, and not two minutes after I got up to the top I ended up shooting a deer and got it all on film. It was such a unique experience to capture that because you’re going to have those weekends when you can’t get it together, but then you’ll have these amazing hunting experiences. You have to fail sometimes in order for the hunt to be meaningful.

We went on a series of comical squirrel hunts too. It was absurd. We struggled so much with that one, and I don’t know why. You can’t always get an animal though. It’s wonderful when you do, but you must have the grace to accept that you won’t always succeed.

LL: Did having someone document what you’re doing change the way you hunted?

JG: It didn’t. We wanted to capture things in the moment. It needed to be very organic, real, and reflect the situation at hand. Having him there was like having another hunting partner. Jody is adept to being outdoors, so I never had to turn around and be like, “Would you get down?!” He totally got it. We can sit in a box the size of a phone booth for four hours. We’re friends.

LL: The eating local trend has been going on for a while. What you’re doing in the book though is taking things a step further and encouraging readers to go hunt materials themselves. Is this something you’re seeing consumers do more now, or is it still a relatively new phenomenon?

JG: I think we’re seeing a powerful trend right now. This is a very general statement, but people want to know more about the world. They’re starting to realize that their actions affect the world, and they’re wondering what steps they can take to lessen their impact. If that’s going to the farmers market and trying to buy as many vegetables as possible, that’s great. I think we’ve seen a dramatic shift in the perception of hunting though. People are accepting that it’s not this hateful, violent act, but that it’s a normal thing to do if you’re going to consider yourself a meat-eater.

LL: Was there any particular recipe that resonated with you, or one that readers will find a lot of value in?

JG: The stuffed venison flank is something we always get a lot of feedback on from hunters. It’s a recipe that I love because it embodies one of the points we’re trying to make in the book. Most seasoned deer hunters that break their own deer down–and even ones that take it to a processor–end up discarding this piece of meat. You’re carving all the meat off the ribs; it’s the equivalent of the belly off of a pig that you’d make the bacon out of. On a deer, it’s incredibly tough. They might grind it into the sausage, but more than likely, it’s in the trash. And that’s heartbreaking to me. I don’t want to see anything in the trash. When we show this recipe to people that have hunted for years, they are like, “I didn’t know you could do anything with that.” And when we serve it to them, they are like, “Wow, this is amazing.” The thing is they just didn’t know what to do with it. I love that recipe because it teaches people who are already experienced hunters. It’s a gateway that opens up a whole new realm of things they can do with their deer, their pig, their duck, or whatever.

LL: What’s next for you? Any plans on the horizon?

JG: That’s a great question. We’ve been going on three years of trying to open a shop. It’s been difficult, but that’s definitely the next step. As a business, Dai Due is going to have to become a brick-and-mortar. People are shocked that we haven’t already, but commercial real estate is no fun, believe me. I want to do another book, but I’m frankly still reeling from this one. It’s nothing like I’ve ever done before. I’m used to cooking all day and being with my crew. I don’t get to do that as much as I used to. I would like to write another book, and Jody and I are still passing ideas back and forth to each other. We’ll eventually settle on one.