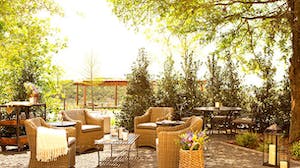 Oh, how downtown Austin’s Rainey Street has changed. This quiet little neighborhood used to be the last refuge of cute houses in the area, and its inhabitants probably never imagined such a transformation. It started with a modest influx of hula hoopers and beer-pong players at the trendy Lustre Pearl bar, but by the time I visisted last Saturday, the short little block had clearly exploded with activity: Traffic coated the streets, the UT game blared from bars, and brassy voices chortled in the moonlight. But don’t despair. The floodgates on Rainey Street have also opened to some of the best trailers in town, including Cazamance, a new spot serving east African cuisine. A precious brown trailer with picnic tables and twinkling lights strewn alongside it, Cazamance serves up traditional Senegalese dishes like stewy Yassa Chicken as well as fresh salads and an array of daily specials. My favorite was the Dakar Boy’s Burger, generous hunks of supple lamb with cumin and garlic topped with a raita-like yogurt sauce and served in bunny chow. Sure, “bunny chow” sounds like either a boring mix of diced carrots and green roughage or the ever-present holiday “puppy chow” Chex Mix by the water cooler at work. But bunny chow is the bread bowl that will never disappoint you. Instead of stale crust filled with gloopy soup, try a hollowed-out, toasted half-loaf of slightly sweet white bread, the outside sturdy and flaky, the inside soft and soused in tomatoey lamb sauce. Speaking of sauces, I loved the refreshingly light, almost-Thai-inclined flavoring in the Veggie Pocket. While its name is reminiscent of the microwave treat sure to upset your stomach, its contents didn’t resemble a Hot Pocket at all: Strips of red bell pepper, mushrooms, zucchini, squash, and onions were stir-fried in fragrant peanut oil, cilantro, and other herbs and served over our choice of flavorful djolloff rice. (As with most items on the menu, you can choose between the rice, bunny chow, or a wrap.) We also had rice with the Yassa Chicken, the most familiar and popular entry on the menu but one I found a bit bland and dry. Almost as disappointing were the disorganized menu and waitstaff, which made ordering the meal much more difficult than it should have been. But I’m going to give Cazamance the benefit of the doubt and chalk up the Yassa and the chaos to opening-month jitters. The soup of the day, a peanut lamb stew, redeemed the few setbacks. The lamb was nowhere to be tasted, but the chunks of potatoes and carrots in a thick, spicy stock charmed nonetheless. Also helping were the grilled wedges of bread served on the side, perfect for dipping. Or, if you’re a dip like me, perfect for dropping on the ground on the way to your mouth. (And no, I didn’t play beer pong prior to eating.) Regardless, I have to drop out of the chorus of whiny Austinites crying as they drive down memory lane, er, Rainey Street, because Cazamance promises a bright and delicious future. Posted by Megan Giller