Oil is flowing through the Dakota Access Pipeline, despite years of protests against it by Native American tribes. Indigenous rights activists and environmentalists said it threatened the water supply of the Standing Rock Sioux Tribe and violated culturally and historically important sites.

By all measures, it would seem that Energy Transfer Partners, the Dallas-based company that owns a major stake in the pipeline, won the battle against protesters when the pipeline received a final construction approval from the Trump administration in late January. But instead of burying the issue underground with the completed pipeline, ETP is now suing a handful of environmental groups involved in anti-pipeline protests. The energy company is seeking over $1 billion in damages and attorney fees from Greenpeace, Earth First, and BankTrack for defamation, racketeering, interference with business, and criminal conspiracy.

“We felt compelled to file the lawsuit against Greenpeace and others because we want the truth to come out about what we believe are illegal actions that took place in North Dakota and the funding of those actions,” says an ETP spokesperson. But lawyers for Greenpeace and the American Civil Liberties Union, which filed a brief in support of the environmental nonprofit, say that the lawsuit is nothing more than a “strategic lawsuit against public participation,” or SLAPP—an attempt to silence political speech.

“[The case] doesn’t have any merit,” says Tom Wetterer, a lawyer for Greenpeace. “It’s designed to burden us with a cost in terms of money and time, and to try and silence us, to distract us from doing our work, and to chill others from speaking out.”

ETP’s suit labels Greenpeace and EarthFirst as “rogue eco-terrorists,” accusing the organizations of violating the Patriot Act and using the Standing Rock Sioux Tribe’s cause as a fundraising platform. Wetterer calls the term a trigger word. “It’s meant to tarnish the whole movement against the Dakota Access Pipeline,” he says.

BankTrack, which advocates that financial institutions are transparent in their investments and provides the public with information about which banks support environmental and human rights abuses, is accused of “[spreading] false claims throughout the marketplace, targeting the Plaintiff’s banks, investors, research analysts and other critical business constituents.” During the standoff between protesters and the pipeline, many activists urged banks and individuals to divest funds from ETP and other entities which were involved in building the Dakota Access Pipeline.

The lawsuit calls EarthJustice, the environmental nonprofit that represented the Standing Rock Tribe in court to stop a key pipeline permit, a “parasitic” organization that lied to the press about the environmental threat posed by the Dakota Access Pipeline. “The Enterprise exploited the impoverished Tribe’s cause for its own ends,” ETP’s brief states, referencing the network of organizations involved in protests and activism against the pipeline.

Linda Black Elk, a member of a Native American tribe who lives on the Standing Rock reservation, told the Intercept that this claim was racially tinged. “They were basically saying that we were not intelligent enough to know for ourselves what the possibilities were in case the pipeline were to leak. They were basically saying we were manipulated,” she told the news organization last month.

ETP’s filing also named several groups as part of a disinformation campaign against the pipeline— including the climate-change-advocacy group 350.org, the Rainforest Action Network, Democracy Now, and Veterans Stand for Standing Rock.

Tweets from 350.org’s founder, Bill McKibben, and publications from the Sierra Club about the impacts of the pipeline were included as evidence of the nonprofits “misrepresenting” the environmental threats posed by the Dakota Access Pipeline, including climate change and the potential contamination of the Standing Rock Tribe’s water source.

Brian Hauss, a lawyer for the ACLU, says that ETP’s defamation claims seem weak. “What they allege to be defamatory are pretty clearly statements of opinion that cannot be subject to defamation as a matter of law. A blog post criticizing the process by which the Dakota Access Pipeline came into being is pretty classically protected first amendment speech.”

With the charges of conspiracy and racketeering, ETP might be able to pursue the case further in court. The lawsuit accuses Greenpeace, BankTrust, and Earth First of inciting money laundering, arson, terrorism, cyber attacks, and sending death threats to employees. These acts, however, were perpetrated by people not named in the lawsuit, but the nonprofits are accused of supporting such actions.

“The accusations are pretty extreme,” says James Coleman, a professor at Southern Methodist University’s law school. “You don’t have a first amendment right to bomb a pipeline but you have the right to make your voice heard on matters of public concern. And the courts are going to be very weary of an attempt to cut off those first amendment rights, but if you’re able to prove that this is really violence, that’s different.”

Greenpeace has filed a motion to dismiss the case, which is still pending. If the case proceeds, ETP will likely try to prove a direct link between Greenpeace and other actors who engaged in violence or other criminal activity.

Since the lawsuit was filed in North Dakota, it may be harder for Greenpeace and the other defendants to get the case dismissed as a SLAPP case that targets free speech. In October, Greenpeace was able to get a similar defamation and racketeering case dismissed in the state of California. It was filed by a Canadian logging firm represented by the same law firm that is now representing ETP.

“California and Texas have some of the strongest anti-SLAPP laws. North Dakota doesn’t have any of those laws,” Coleman says. “You might think, why didn’t ETP sue in Texas, because they’re based here? Maybe they didn’t want Texas law to apply.” 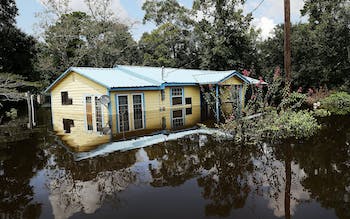 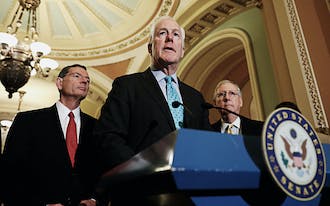