A chef at the forefront of new-wave Texas cuisine is reinventing an old-fashioned medium. Bryce Gilmore of Austin restaurants Odd Duck, Barley Swine, and Sour Duck Market will release The Odd Duck Almanac next month.

Published by Austin-based Cattywampus Press on December 9, it’s the first book featuring recipes from the chef—who’s been a James Beard Award finalist multiple times—and his partners. Gilmore says the publisher approached him about collaborating on a project. For Odd Duck, it seemed to him like a good opportunity “to celebrate what the restaurant has evolved into, showcasing some of the farmers and staff that make this place what it is.”

Edited by Austin food writer Veronica Meewes, with photos from Richard Casteel and illustrations by Brock Caron, The Odd Duck Almanac is a cross between a yearbook, a cookbook, and a magazine. It’s divided by season, with a section on drinks at the end. The result is a cheerfully noisy volume that’s simultaneously deeply serious about food.

They hope to publish a new, themed issue each year, which will include an overview of recipes the restaurant has cooked during the preceding year, updates on Odd Duck’s latest plans, discussions of Central Texas foodways, and more. Odd Duck’s cooks, bakers, bartenders, and its supplying farmers will weigh in.

This first edition is called the “Mother Issue” and examines the culinary concept of mother sauces through Odd Duck’s unique sensibility. In place of the traditional French béchamel or velouté, for example, you’ll find the restaurant’s signature picks: hot sauce, salsa and relish, cheese sauce, mayo, and whiskey. This taxonomy is the foundation for its creative riffs on Texas cooking. 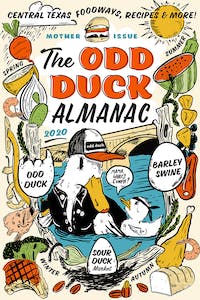 The recipes are plentiful, though originally composed for a professional kitchen. “These recipes are from our database and are inputed by various creators,” Gilmore writes. “You might see something that doesn’t make sense to you as a ‘civilian,’ and that’s OK.” These cheffy recipes hold with the almanac’s archival, yearbook-like format. What you see is exactly what the restaurant has been cooking, but the scale doesn’t always make sense for home cooks. For example, the recipe for goat chili calls for a massive twenty pounds of ground goat meat. A little math never hurt anyone, though, and plenty of the recipes seem manageable. I’m planning on making the broccoli quesadillas and marinated/charred green beans as soon as possible, in addition to working my way through the cocktail recipes.

Sidebars and articles include a sauce-oriented zodiac (a Scorpio, I am mustard), plenty of staff bios, and a love letter to sourdough starters from Odd Duck chef/partner Mark David Buley. Fans of the restaurant will love the behind-the-scenes story of the early days of the original Odd Duck trailer, as well as insights into the secret sauce that makes the restaurant’s dishes unique.

Gilmore sees this potentially annual publication as a great marketing opportunity. (He’s planning a more traditional cookbook release at some point in the next few years as well.) The almanac could also provide an additional revenue stream, as they’ve made annual subscriptions available. A three-tiered system offers everything from a quarterly email newsletter to “surprise craft goods” like other small books, zines, apparel, and limited-edition merchandise. At the highest level ($100/year), subscribers can opt for VIP treatment at the restaurant, including special access to reservations, early access to events, and 10 percent off at Odd Duck. All levels include the almanac itself, and subscriptions start at $30.

“We’re always looking for fun ways to engage with our guests,” Gilmore says. The almanac “will provide them with a memory of us to last forever.”