The Homesick Texan Gets Cheesy With ‘Queso!’

As proud Texans, we know there’s only one answer for where to dip a chip: queso. And by queso, we mean the classic Tex-Mex fondue, with two simple ingredients: Velveeta and Ro-Tel. It’s creamy, it’s velvety, and it’s far from a fancy, gourmet, health-conscious snack. As Patricia Sharpe, Texas Monthly executive editor and food critic, says, “Why reinvent perfection?”

Which is why we were dismayed to see the ingredient list for Chipotle’s queso when the chain rolled it out last fall. Aged cheddar cheese? Three kinds of peppers? Cumin and oregano? That’s not the queso we grew up ladling from a bubbling crockpot. We tasted the attempt at all-natural, all-fresh queso back in September, and—ever the cheesy optimists—we tasted the adjusted recipe in November. The results were, well, not good.

Despite previous taste tests, we love the idea of finding good queso at a chain with restaurants across the country, so when we heard that the restaurant was looking to improve its recipe for cheesy, melty goodness, we decided to see if we could give Chipotle some constructive criticism to help them out. Texas Monthly staffers took a deep breath, picked up a chip, and tried a bite of Chipotle’s queso—so that you don’t have to. (You’re welcome.) Here are our reactions.

“It’s better than it was, but . . . hold on. It’s not quite as granular as it was, but it’s still not as smooth as queso oughta be. It’s like superfine sand or something. Bad sandy queso.” —Patricia Sharpe, executive editor and food critic

“It’s better than it was, but it tastes like if you took Velveeta and sucked the fun out of it. I’m still getting the feeling that they mixed dirt in there. There are grains in there.” —Abby Johnston, senior editor

“It’s like someone whispered the suggestion of queso, and they distilled that. It’s so watery. It’s not even unremarkable. I just feel so defeated.” —Sarah Rutledge, assistant editor

“I love it. [Takes second bite.] Better than it was before, but not great. It’s definitely missing something. Not the worst queso I’ve ever had…Do you think they intentionally make it bad for publicity? Maybe it’s a conspiracy.” —Paul Knight, associate editor

“The first thing is, you don’t trust yellow cheese. [Takes a bite.] Wow. It was scary because I could smell it before I tasted it.” —Carlos Sanchez, senior editor

“It is gritty. It’s familiar, but not queso. [Shakes his head.] I can’t pinpoint it. It tastes like chili-flavored Fritos—but not in a good way. It’s more gravy-like than cheese-like.” —David Courtney, senior editor

“[Licks a chip.] There’s a bit of granularity. What is that? Did they puree vegetables into it? I’m from Wisconsin and I love cheese, and this is crap.” —Megan Creydt, digital managing editor

“It’s really jelly-like. There’s some chunk of unidentified vegetable—it looks like zucchini? Is it broccoli? This has the consistency of broccoli and cheese soup. It just tastes bad, I have no more comments.” —Claire Hogan, assistant photo editor

“It’s gelatinous. It has no spice to it whatsoever. Even if it were Velveeta and a can of salsa, it’d be better than this. You have to work hard to get it this bad. No bueno.” —Brian Standefer, multimedia producer

“It’s a little grainy. I do like how it’s nice and spicy. I think it’s good. It’s a tad bit powdery. I would eat it.” —Robert Davila, vice president of audience and research

The Homesick Texan Gets Cheesy With ‘Queso!’ 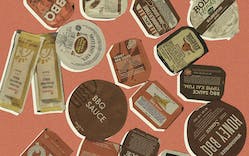 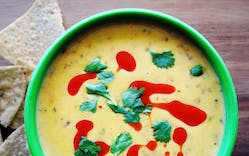 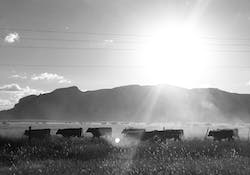