When Drew Curren first signed up to operate a restaurant at downtown Austin’s new, state-of-the-art central library, which opened in October, near Lady Bird Lake, to much acclaim, one of his then-partners in the ELM Restaurant Group came to him with an inspired thought. “He said, ‘Man, I got a goofy idea. What if we named the cafe Cookbook?’ ” Curren remembers. “And I was like, ‘Oh, that’s kinda cute. We can just source all the recipes from my cookbook collection.’ ”

Two years later, Cookbook Bar & Café, which opens today at the library’s entrance on West Second Street, does just that: everything on the breakfast and lunch/dinner menus is based on recipes from some of Curren’s favorite chef and restaurant cookbooks, from the whole-wheat raisin scones (Zoe Nathan’s Huckleberry)  to chicken pot pie (Ad Hoc at Home, by Thomas Keller) to a watermelon agua fresca (Alice Waters, Chez Panisse Fruit).

All good restaurants tell a story—about food, about family, about history, about community. And the best cookbooks are more than just a set of instructions on how to make something to eat. With Cookbook, Curren tells his own story—and a lot of other people’s stories. Just as a library lets you visit new worlds by reading books you don’t own, the cafe is a tour of other cities, restaurants, stories, dishes. It’s not just  part of the library but is itself a library: of food you actually get to eat. (Sorry, you’ll still need some form of currency, not just a library card, to do so. Entrées range from $7 to $14; the children’s menu options are all $8.)

The concept has some precedent. The Boston Public Library has a restaurant and two cafes. And of course, many bookstores have a coffee shop. Cookbook fits best into the tradition of museum restaurants, where the two institutions are complementary creative experiences. Its closest cousin is In Situ, at the San Francisco Museum of Modern Art, where Cory Lee’s menu is devoted to rotating selection of signature dishes from other local and international chefs, including Waters, Keller, Sean Brock (Husk), Chad Robertson (Tartine Bakery), and Tory McPhail (Commander’s Palace).

Cookbook is a more populist version. It’s a cafe, not a restaurant. Curren’s ELM restaurant group is best known for 24 Diner, Italic, and Easy Tiger bakery and beer garden (though after a recent business shake-up, it no longer owns Easy Tiger). Its last project was the downtown food hall Fareground, which opened in January on the ground floor of an office tower not far from the central library. As Curren notes, both Cookbook and Fareground are both “an amenity to the building.” You can order food through a window in the library’s lobby, while an indoor communal area includes tables, shelves, and cubbies full of cookbooks, which can be checked out. It also features the donated cookbook collection of  Austin Chronicle food writer Virginia Wood, who died in March.

While the perfect library has every book about anything, a menu naturally had to have some limits and parameters. In addition to being personal favorites of Curren and his wife, ELM executive pastry chef Mary Catherine Curren, the choices had to be accessible (and affordable) enough for a broad, egalitarian customer base as well as regionally relevant. “I wanted to keep it Southern,” he says. “I wanted to represent Mexico and Texas. And I wanted to represent my mentors.”

For Curren—like his wife, a Culinary Institute of America graduate who worked in New York City for a time—that list includes Jonathan Waxman (Barbuto), Justin Smillie (Upland in New York and Miami, though he is also a Barbuto alum), and Indian American chef Floyd Cardoz (whom he worked for at the now-departed Tabla). Other names on the opening menu include Brock; Nicolaus Balla and Cortney Burns of Bar Tartine; and the late Marcella Hazan. The menu format is something like a bibliography (or table of contents), stating the dish, the book it came from, and the chef. “It’s all people I respect,” says Curren. “It’s also personal.”

The approach even extends to the children’s menu (“It’s a library. You have to have a kids menu,” Curren says). Of course there is grilled cheese (from Heidi Gibson and Nate Pollak’s Grilled Cheese Kitchen, which is also represented with a grown-up breakfast sandwich), as well as a chicken, carrot, potato, and fruit kebab plate inspired by Alain Ducasse’s Cooking For Children. Just as regular books for kids don’t have to be dumbed down, Ducasse does not believe that food should be, either. The actual Ducasse recipe is an apple pear yogurt sauce, served with the kebabs. (Similarly, the restaurant will serve local seasonal vegetables, for which there is no recipe, alongside Justin Smillie’s caper onion salsa from his book Slow Fires.)

A library might be the only place in Austin without constant live music, but of course Cookbook has a bar, with local beer and local top-shelf booze, as well as kombucha, juice, and Richard’s Rainwater. There’s no soda, but there are the Alice Waters fruit drinks. Cocktails don’t come from a cookbook but are full of wordplay (“The Adventures of Huckleberry Gin,” “Murder on the Orient Espresso”) inspired by Tim Federle’s book Tequila Mockingbird: Cocktails With a Literary Twist.

Commander’s Palace is also represented with a yogurt parfait (from The Commander’s Palace Cookbook), though what Curren loves most about that book aren’t the recipes. It’s the section about the ABCs of running a restaurant by Commander’s Palace patriarch Dick Brennan.“He calls it ‘a fanatical commitment to the consistent execution of the fundamentals.’ Serving hot foods hot and cold foods cold, keeping the bathrooms clean, and making the stock the long, laborious, intensive ways. Not cutting corners. Doing the things that you never get patted on the back for. Because if you don’t do them, your restaurant will close. Anyone I hire, I tell that story to.”

Where many chefs will riff off of other people’s cooking as inspiration, homage, and affectionate theft, and many home cooks treat recipes as a loose blueprint, Cookbook’s concept means a fairly strict commitment to the texts. “I am being as faithful as I can,” Curren says. “You can’t just take a recipe that serves four to six and turn it into a restaurant recipe. You can’t just multiply salt times ten, or Thai chiles by ten.” Some books are more specific than others. With Thomas Keller, Curren says, everything is “by the gram and very thoughtful.” With Waxman, it’s “a smear” or “up to a spoonful.”

Because everything has to be from a cookbook, Curren couldn’t just serve his own breakfast taco. To fill that spot on the menu, he initially thought he’d turn to Paula Forbes’s recent The Austin Cookbook, which includes a huevos rancheros recipe from Joe’s Bakery, in East Austin, just a few miles from the library. But Forbes didn’t feel that the permission was hers to give.

Instead, Curren turned to the huevos rancheros from Gabrielle Hamilton’s Prune—the recipe is just for Hamilton’s ranchero sauce, which is then available at Cookbook’s breakfast in three ways: a traditional platter with eggs, a corn tortilla, refried beans and bacon; two tacos; or a burrito.

It’s a provocative move, given that Hamilton and her wife/co-chef Ashley Merriman’s recently announced plans to partner with #MeToo offender Ken Friedman at the Spotted Pig, which was itself an epicenter of bad behavior. “She is somebody I respect, and [it’s] a restaurant that I love,” Curren says of Hamilton and her longtime eatery in New York’s East Village. “I have some classic memories of the Prune brunch.”

Curren says the headlines are actually what made him pull Prune off the shelf. Ironically, he originally wanted to include one of Hamilton’s pastry recipes, but when that didn’t feel quite right (“it had a lot of rosemary in it”), he opted for a chocolate hazelnut tart from beloved late chef and writer Anthony Bourdain, a fierce #MeToo advocate. “So that was kind of a nod to him and then my nod to Gabrielle, kind of staying current with what’s going on in the world today,” Curren says.

Cookbook’s menu will be ever-changing. Monthly specials might come out of a newer cookbook, ideally one where the author might also be in town (for instance, the New Orleans chef Alon Shaya, who appeared in the library’s demonstration kitchen in May, would have been a natural). For months where there’s not an obvious new cookbook or chef to feature, Curren is considering Austin’s greatest hits, such as something from Dai Due chef Jesse Griffiths book, Afield, or  Tyson Cole’s Uchi cookbook.

It also seems inevitable that Curren will have to deal with a high volume of requests (e.g., “Can you do my favorite dish from the such-and-such cookbook?”). The only way to deal with that is “the same way I take requests now,” Curren deadpans. “Very graciously.” 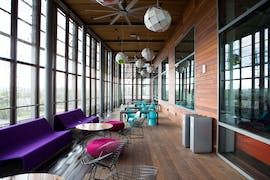